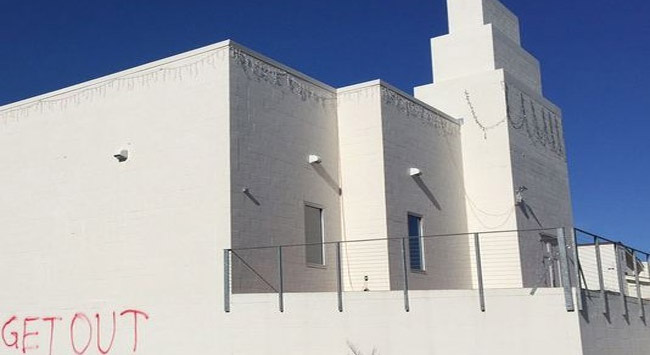 Washington, Feb 18 (IANS) As police investigated an attack on a Hindu temple in Washington State on the eve of the Maha Shivaratri festival, Indian-American groups condemned “the cowardly act” as a “very sad moment” for America.

The vandals who spray-painted a red swastika and scrawled “Get Out” on a wall of the Hindu Temple Cultural Centre in Bothell, 36 km from Seattle, in Washington State Sunday also targeted a nearby school, police said Tuesday. No suspects have been identified in the case, but the Snohomish County Sheriff’s Office said red swastikas and warnings for Muslims to “go home” were found Sunday morning painted on Skyview Junior High School, less than a half mile away.

Bothell Police confirmed that they are now working with the Snohomish County Sheriff’s Office on the case and believe the two incidents are connected, local King 5-TV, an NBC-affiliated television station, reported.

The Northshore School District released a statement saying they were “deeply disturbed by the vandalism at Skyview Junior High School.”

At the temple, people were equally upset to hear about the vandalism at the school, KING-5 said.

Nit Niranjan, the Hindu Temple Cultural Centre Chair, said they were focusing on coming together in the aftermath of this act of hate.

Hundreds showed up on Monday night to celebrate Maha Shivaratri.

“The people who did it, they have no idea what we stand for,” Niranjan was quoted as saying.

“We have a very straightforward religion that stands for love and respect.”

Vandals also targeted the temple several months ago, although no specific message was left behind.

The graffiti has been removed from the Hindu temple, but worshipers fear it could signal violence against them, King5-TV said.

“It is outrageous that such events are happening in America,” said Thomas Abraham, Founder President, Global Organization of People of Indian Origin (GOPIO) International.

“Indian Americans are a contributing community and the larger American society treats us with great respect now unlike 40 years ago when large scale immigration was happening,” he told IANS.

America has one of the most racially and ethnically diverse population, Abraham said. “However there are pockets where some misguided people show their hatred to immigrant groups.”

Washington State Governor and Bothell City Mayor must take immediate action to find the miscreants, he said asking the police to investigate this case as hate crime.

“Our nation is among the top secular nations that has coexistence in its DNA from the onset of formation,” he told IANS.

“Cowardly acts like this one serve as a painful reminder that there still exist individuals in our society with shallow thoughts and venom of hatred.”

“There needs to be a strong representation of the community and a united, one voice community is now required more than ever to address issues like these strongly” and help “the future generations to achieve what we strive for; a peaceful co-existence,” he said.