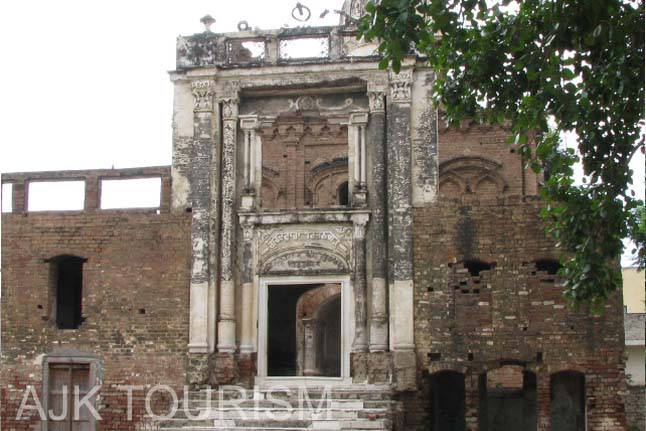 On January 30, 1948, Mahatma Gandhi was assassinated in New Delhi (India).  On that horrible day, I was 10 years old and held prisoner of war in the above Alibeg Gurudwara, Mirpur, (POJK). Following are excerpts from my book “Forgotten Atrocities: Memoirs of a Survivor of 1947 Partition of India”.  Hope that those senseless killings are not repeated again.

“On November 25, 1947, there were nearly 25,000 Hindus and Sikhs living in Mirpur (PAK). During the city’s capture by Pakistanis and Pathans, close to 2,500 were killed in the infernos that erupted due to Pakistani artillery fire. Another 2,5000 escaped with the retreating Jammu and Kashmir (Maharaja’s) army. The remaining 20,0000 were arrested by the invading Pakistani army and the Pathans, and marched in a procession towards Alibeg. Along the way, the Pakistanis and Pathans killed about 10,000  of the captured Hindu and Sikh men and kidnapped over 5,000 girls and young women. About5,000 Hindus and Sikhs who survived the twenty-mile trek by foot  were  imprisoned in above Alibeg Gurudwara  (POJK).

Alibeg prison was located about two miles from Pakistan’s border of Kashmir. It was originally a large Sikh Gurudwara (temple) that was converted into a prison by the Pakistani army to detain Hindu and Sikhs prisoners. It was outrageous that a Sikh holy shrine was converted into a human slaughterhouse. By the end of December, the Pakistani guards had murdered about two thousand Hindu and Sikh young men. More than one thousand sick prisoners, particularly children and the elderly died of illness, food poisoning, or malnutrition. On average, the death rate was between fifteen to twenty prisoners per day until January 1948, when the International Committee of the Red Cross (ICRC) arrived at the Alibeg prison and helped stop the killing.

New Delhi (India), Mahatma Gandhi was trying to stop the massacre of Muslims by Hindu and Sikh refugees who had arrived in India from Pakistan. These refugees were retaliating at the senseless killing and rapes, which they had suffered at the hands of Pakistani Muslims. Mahatma Gandhi had gone on a fast until death if the Hindus and Sikhs did not stop killing Indian Muslims. Hindu and Sikh leaders and refugees listened to the Mahatma’s call and stopped killing Muslims in India. Consequently, Mahatma Gandhi broke his fast.

On January, 27, 1948 a delegation of Mirpur refugees in Delhi met Mahatma Gandhi to liberate Hindu prisoners from Alibeg. This delegation was led by Sardar Lal Singh Kakkar, a Sikh whose brother was killed in Alibeg prison, along with many Hindu refugees from Mirpur.  Pandit Nehru, Indian Prime Minister, was also present in this meeting. They told Mahatma Gandhi about the killing of Hindus and Sikhs in Mirpur and Alibeg and asked them to send army to liberate Alibeg prisoners.  But Mahatma Gandhi told them that it was difficult for Indian army to go forward in those areas because of snow covered roads.  Sardar Kakkar explained to the Mahatma that it never snowed in Alibeg and areas around Mirpur. Pandit Nehru, Indian Prime Minister, only listened and did not make any comment.  In the evening prayer meeting, Mahatma Gandhi made an appeal to Hindus and Muslims of the subcontinent in to stop killing of Hindus (in Pakistan) and Muslims (in India). This meeting did not bring any military action to liberate Alibeg prisoners.  The delegation did not get a second chance for a follow up meetings with the Mahatma to press Alibeg prisoners’ case more forcefully. Unfortunately, on January 30, 1948, Mahatma Gandhi was assassinated.

Alibeg Prison, Pakistani soldiers and prison guards broke the news of Mahatma Gandhi’s assassination to the Hindu and Sikh prisoners. We felt sorrow on the tragic death of the Mahatma but did not have the liberty for a condolence meeting. We did not know the full details of Mahatma Gandhi’s death because we had been cut off from the rest of the outside world. The Pakistani soldiers placed the entire blame of the assassination on the RSS, a Hindu organization. The Hindus and Sikhs in the prison were very sad to know that the killer of Mahatma Gandhi was a Hindu. The only news we ever got was from the discarded Pakistani Urdu newspapers that we picked up from the Muslim grocery stores of Alibeg.

A few miles away from Alibeg, there was Datial Camp, for Hindu widows and orphans. Late author and MP, Krishna Mehta was also a prisoner in this camp along with her children.  Muslim camp in charge, Abdul Aziz, on the evening of January 30th, 1948 came from city of Jhelum (Pakistan) and was very sad. He was almost crying and told the kids that Mahatma Gandhi was killed in India. He did not call everybody to break the sad news but mentioned it to only a few kids who were sitting on the cot with him. He normally did not talk to women prisoners.”

After the death of Mahatma Gandhi, Government of India requested Dr. Otto Wenger of International Committee of Red Cross (ICRC) to help liberate Alibeg Prisoners. He made many trips to Pakistan, India, Indian Kashmir and Pakistani Kashmir. With his tireless efforts, he liberated 1,600 Hindu and Sikh Prisoners (including the author) of Alibeg Prison in March 18, 1948 in exchange of Muslim Prisoners in Jammu (India). The POW’s reached India on March 20th.

** Bal K. Gupta was born in Mirpur (POJK) and is a retired Professional Engineer living in Atlanta.