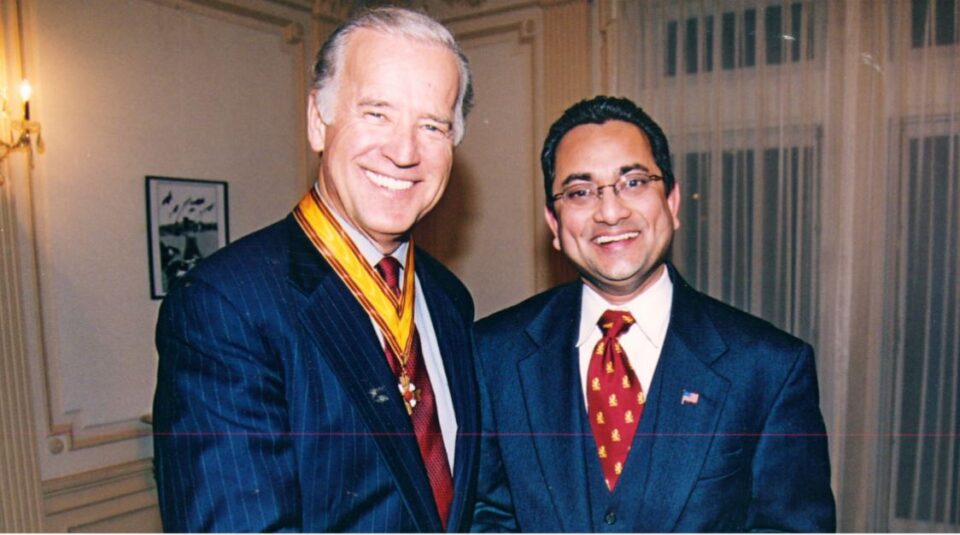 In her victory speech on November 7, 2020, then-Vice President-elect Kamala Harris spoke of Joe Biden’s audacity in selecting a woman — a Black and Asian-American woman, no less — as his running mate.

The turn of phrase brought to mind the title of former president Barack Obama’s book The Audacity of Hope, forming a bridge to the administration in which Biden served so successfully.

Using the word “audacity” to describe a politician with a reputation for “reaching across the aisle” was, in itself, a little audacious.

And it was perfect.

For me personally, Kamala Harris’s words reminded me of a brief conversation I once had with then-Senator Joe Biden.

In 2002, I attended a social gathering in Washington, D.C., at which two senior senators were present: John McCain of Arizona, a Republican, and Joe Biden of Delaware, a Democrat. I spoke briefly and cordially with both. My conversation with Sen. McCain focused on service-disabled veterans and the steps we could take as a nation to honor their sacrifices by creating more opportunities for them. During my conversation with Sen. Biden, I asked, “Am I shaking the hand of the next president of the United States?” His response took me by surprise. He smiled and gestured affectionately toward McCain. “No, that’s him.”

Even as a complete outsider, I could sense the deep and abiding respect between these men from different ends of the political spectrum. They were rivals, yes, but also friends and fellow statesmen engaged in the effort of maintaining and strengthening democracy.

My interaction with Joe Biden engraved forever on my heart the importance of friendship and decency in politics. It also cemented for me the integral role of courage in democracy.

John McCain had served in Vietnam, enduring years of torture as a prisoner of war. He became the symbol of a certain kind of courage.

Together with McCain, Joe Biden has been emblematic of another kind of courage: the courage to consider other viewpoints, to stay open to compromise and conciliation, to trust in the good faith of one’s adversaries based on a common set of values and traditions. Indeed, in his inaugural address on the steps of the Capitol, President Joe Biden spoke openly of the courage he expects of all Americans, of the need to “listen to one another. Hear one another. See one another. Show respect to one another.”

This kind of courage — civil courage — is truly what we need today. We need the courage to end systemic racism, to fight poverty, to address climate change, to ensure that every child has a loving home, to tackle unemployment, to unite our divided nation.

From the moment I arrived in the United States as a young man, I have cherished and admired the decency and generosity of “ordinary” Americans, from the Carolinas to the Midwest to the Pacific Northwest, in small towns and big cities alike. Certainly, among these diverse multitudes you can find less charitable individuals and groups. But I’ve found that for every zealot espousing a close-minded ideology, there are tens of thousands of Americans — Republicans, Democrats, and independents — whose open minds and open hearts provide a critical mass of kindness and understanding each and every day.

After decades of residing in the U.S. and participating in American life, I have come to value the courage that underlies all that kindness and understanding.

It is not unique to America, certainly.

It is a quality I recognize from my travels across six continents and in my conversations with dairy farmers in Kenya, schoolchildren in Bolivia, youth in Morocco, entrepreneurs in India, a restauranteur in South Sudan, community leaders in Ghana, a registered nurse (and SOS Children’s Villages alumna) in Jamaica.

That same courage was evident in my meetings with other, more celebrated individuals, from astronaut and U.S. senator John Glenn to Mother Teresa, from the Dalai Lama to President Bill Clinton.

After each of these interactions, I came away deeply impressed with the tremendous courage of individuals to make transformational change, regardless of the circumstances or the difficulty involved.

And the United States is a country where this kind of courage is critical to our economic and social progress, our national security, and our global leadership.

In an open letter I wrote to President Biden and Vice President Harris, I urged them to focus on vulnerable children and youth in this country and ensure that they have the safety, care, and opportunities they need to thrive.

**This article first appeared in the Philanthropy News Digest.