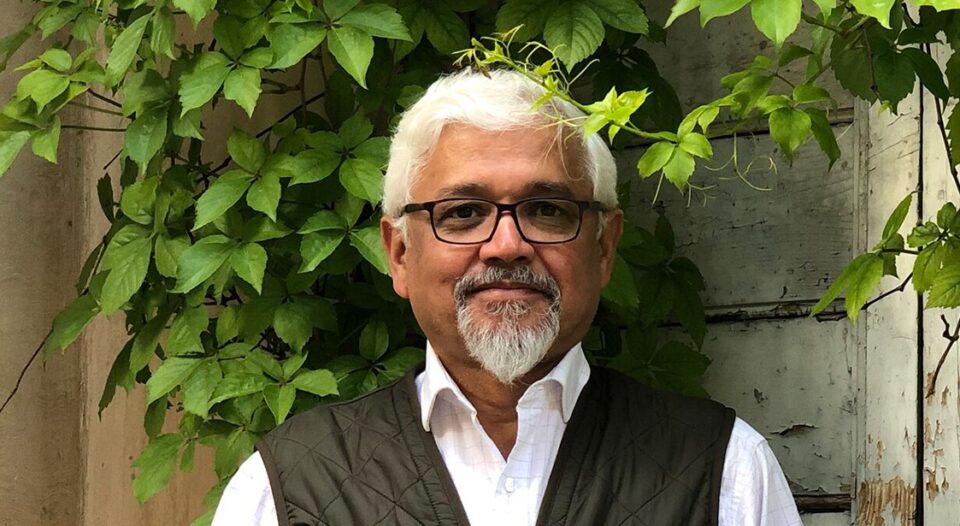 Atlanta, GA, December 7, 2020: The Sheth Lecture in Indian Studies and Emory University’s Michael C. Carlos Museum invited celebrated author Amitav Ghosh to speak about humanity’s failure to grasp the scale and violence of climate change and the ways in which his most recent works, The Great Derangement and the novel Gun Island, attempt to shift our collective thinking about one of the most urgent issues of our time. The hour-long virtual event on November 18 was moderated by Elizabeth Horner, director of education at the Carlos Museum, and included a Q&A session that was open to the audience.

Best known for his novels, Sea of Poppies, River of Smoke, and The Hungry Tide among others, Jnanpith awardee Ghosh spoke about the importance of restoring the landscape and non-human voices as protagonists in literature.

“In the case of storytelling, it has never been the case that non-humans didn’t have voices. The Ramayana and Mahabharata are filled with non-human voices, as are epics like the Iliad and Odyssey. One of the aspects of the derangements is that literature, as it developed in the 19th and 20th centuries, took away the non-human voice, and we have to find ways of restoring it.”

Ghosh said, since he wrote The Great Derangement, there has been a major shift within the literary world. “With so many massive climate disasters, people began to realize that climate change is at our doorstep, not in our future.”

He quoted The Overstory by Richard Powers (which gives voice to trees) as an example of this shift in literature.

The unpredictability and speed at which things are changing has meant that the language of probability, which used to be the language of climate science, is dissolving. “Climate scientists are adopting a vitalist language,” he said.

In terms of literature, the unfolding global crisis has meant that novelists, who have traditionally written about one setting, now have to think about the world as a setting. Ghosh said, in Venice, he noticed that a large portion of workers are Bengalis, as are the working class in Goa. He alluded that this was the effect of millions being driven out of the Sundarbans because of rising waters.

The Indian-American author lamented that everything that comes out about climate change is from the Western academia and think-tanks and is told in an expert language. “It is important to remember that climate change is much larger. Where are the voices of migrants who have been displaced; people who walk long distances for water because of drought?”

As opposed to the Paris Climate Accord, Pope Francis’ encyclical on climate change is striking because, although profoundly informed, it speaks a simple, powerful language that reaches ordinary people. “It is ultimately calling for climate justice, and to change our ways of thinking and living. By contrast, the Paris Accord, watered down because of pressure from the United States, is not meant to reach the public. The language is internationalist jargon and its discourse is confined within the expert sphere,” he said.

Ghosh said climate change and the current pandemic are cognate phenomena—both are caused by increased production, consumption etc. Hence, the pandemic is a good predictor of the ways in which climate change is going to play out.

“Don’t think that poor countries will bear the brunt of it,” he said, adding that the pandemic turned out to be far from an African apocalypse. At one point, Somalia was sending doctors to Italy. “Countries with greater inequalities like the US, Brazil and India were disabled by the pandemic. Affluence did not protect a country’s citizens. On the contrary, it accelerated the pandemic’s impact.”

An accurate indicator of the impact of climate change is the degree to which the environment has been changed. As an example, he said, that indigenous people in California had warned that “what you do to the land will come back to haunt you.”

Ghosh said around 20% of greenhouse gas emissions come from militaries in the US and other developed countries. If the Pentagon–which is the largest landowner in the US– were a country, it would be the 4th or 5th largest emitter in the world. “Many of its installations are threatened by climate change,” he added.

Ghosh’s talk included an audio-visual presentation on climate change and readings from The Great Derangement.

The event was sponsored by the Sheth Family Foundation, Goizueta Global Strategy and Initiatives, and the Michael C. Carlos Museum.

*Veena Rao is the author of Purple Lotus and the editor-in-chief of NRI Pulse.