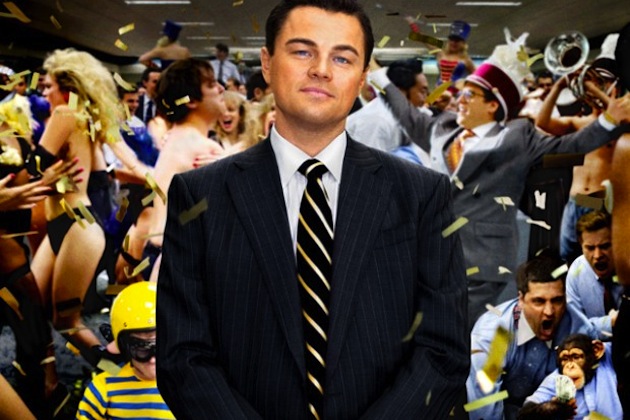 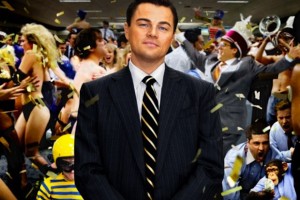 By Troy Ribeiro
Film: “The Wolf of Wall Street”; Cast: Leonardo DiCaprio, Jonah Hill, Margot Robbie, Mathew McConaughey, Rob Reiner and Joanna Lumley; Director: Martin Scorsese; Rating:
***1/2
After selling, “garbage to garbage-men” Jordan Belfort (Leonardo DiCaprio) decides to make it big. “Everyone wants to get rich,” he announces to his neighbour Donnie Azoff (Jonah Hill) and his cronies, Brad (Jon Bernthal), Nicky (P.J. Byrne), Robbie (Brian Sacca) and Chester Ming (Kenneth Choi) when they decide to recruit a team of stock brokers to widen their horizon by hustling rich men with blue chip stocks. “I want the young, hungry and stupid. In no time, I’ll make them rich,” he assures them.
This is neither the prologue of the film nor the introduction of its characters. Instead, it is a scene that captures Jordan as the brain behind the brokerage firm Statton Oakmont that trades in “unregulated penny stocks”.
Twenty six-year-old Jordan, worth $49 million earns the title of “The Wolf of Wall Street” after the leading business magazine Forbes interviews him for surviving the stock market crash of 1987. On further investigations by the FBI, it is revealed that Jordan made his millions by cheating his clients.
Martin Scorsese’s latest film, “The Wolf of Wall Street”, is a three-hour saga, which is funny and wildly energetic. It chronicles the rise and fall of street-smart broker Jordan Belfort from an out of work stock-broker to a multimillionaire.
The screenplay, by Terence Winter, is loosely based on the 2007 released memoir of Jordan Belfort. It encapsulates the dramatic eight years in the life of Jordan Belfort, as a smooth talker, shrewd and pragmatic financial manipulator who had a large appetite for drugs, sex and money.
The film after the initial inciting moment, rambles with an overdose of pointless drug humour and excessive, unwarranted debauchery. The only provoking scenes, that involve obscenity and cuss words, are oft repeated for shock value, which, over a period of time get accepted as the norm and cease to shock you further. The narrative is quickly reduced to watching interchangeable scenes of exaggerated vile and virile people partying.
The intricate details of the white collar crime or its causality are not dwelt upon. The entire crux of the financial scam is dismissed off with Jordan telling his wife, “You don’t understand what I am saying. Well, in a nutshell, everything we do is illegal.”
The only thing that keeps you hooked to the film is the realistic performances by the cast. Each and every member has obviously invested their heart and soul into the characters they play.
DiCaprio as Jordan excels with a blatant display of insatiable greed and arrogance that is quite enthralling and engrossing at times. His dramatic motivational speeches to his employees as well as his apt performance of crawling to his car in drugged stupor are outstanding.
Similarly, Jonah Hill as the equally greedy and idiotic Donnie Azoff leaves an impact. So does; Matther McConaughey as Jordan’s mentor, Rob Reiner as Belfort’s dad, the Australian actress Margot Robbie as Belfort’s quickly disillusioned wife Naomi and Joanna Lumley, as her aunt.
The only actor who fails to make much of an impression is Jean Dujardin who, as the drab Swiss bank manager, is wasted in the film, considering that he had won the Best Actor Oscar for “The Artist”.
Technically, director Martin Scorsese does not disappoint his viewers. Though there is nothing exceptional about the cinematography, the long continuous shot of the chaotic Stratton Oakmon office is amazing.
The Indian audience would be disappointed with some abrupt edits and jump cuts. These cuts were imposed by the censors.
Overall, “The Wolf of Wall Street”, like DiCaprio’s previous film, “The Great Gatsby” is an over-egged pudding that’s worth a watch.