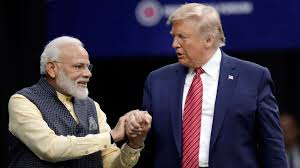 Houston, Sep 22 (IANS) US President Donald Trump on Sunday praised the Indian-American community for revolutionizing the world of technology.

Appearing at the ‘Howdy, Modi!’, in a rare gesture that signifies the close bond between India and the US, President Trump told the gathering of over 50,000 people at the NRG stadium here: “Indian-Americans are helping revolutionize technology to change the world and improving lives”.

Thousands of Indians are working at some top American tech firms that are run by Indian-origin CEOs like Satya Nadella at Microsoft, Sundar Pichai at Google and Shantanu Narayen at Adobe, among others.

Trump further said both the countries will work together to create cutting-edge technology to benefit millions.

Signalling his support for legal immigration, Trump had said in June that he will change the H1-B visa system for professionals to ensure “certainty” and a path to citizenship for those on the visa.

“H1-B holders in the US can rest assured that changes are soon coming which will bring both simplicity and certainty to your stay, including a potential path to citizenship. We want to encourage talented and highly skilled people to pursue career options in the US,” he had tweeted.

Indians are the biggest beneficiaries of the temporary H1-B visas, 76 per cent of which went to professionals from India last year, according to government statistics.

Limiting H1-B visas has been a matter of concern for India and New Delhi has taken it up with Washington as a trade-related issue.

Major US companies have warned that the limiting of H1-B visas and the long wait for permanent residence seriously affects their ability to get and retain talented staff.

A total of 85,000 H1-B visas are available each year under regulations imposed by the Congress. Of these, 20,000 are reserved for those graduating with advance degrees from US universities.

Nothing on record to show Tharoor incited Sunanda Pushkar to commit suicide: Court