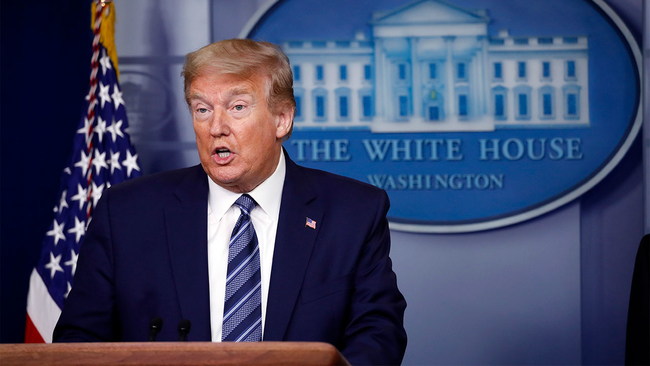 New York, April 23 (IANS) US President Donald Trump has issued an executive order banning many categories of immigration to the US for 60 days but it does not apply to H1-B professional visa-holders.

Trump signed the executive order on Wednesday evening and reiterated afterwards at his daily news briefing that he took the action to protect Americans thrown out of work by COVID-19 shutdowns.

The President said that he may reconsider it before it expires in 60 days.

Although he said repeatedly in the order that the 22 million Americans who have lost their jobs will be protected by the ban, there are several exemptions in it for potential immigrants and it does not cover those coming in on temporary work visas.

This makes it more of a political statement than a “strong” action as he called it, playing to a section of his political base while not upsetting business interests.

The ban does not apply to those who have already received their green cards or permanent resident status and to holders of temporary visas but find themselves abroad.

The ban distinguishes between those seeking to immigrate to the US permanently, who are covered by the ban, and those coming in on temporary visas, who are not.

Among the exempt categories of those immigrating are healthcare workers and those involved in COVID-19 and other medical research along with their families.

The order also exempts spouses and minor children of US citizens and members of the armed forces, and those required for law enforcement purposes who are in the immigration pipeline.

Holders of work visas like H1-B for professionals and H2-A for farm and other labour are exempt because they not considered immigrants as their visas are for a limited period and do not confer a permanent resident status.

Indians are the single largest group of H1-B visa-holders accounting for nearly 74 per cent of all such visas.

In addition to American firms, several Indian technology companies rely on the H1-B workforce to operate in the US.

The ban also does not cover L-1 visas for employees of foreign companies transferred to work in the US.

Investors, including those in the category eligible for green cards, are also exempt.

In contrast to his public statements about a quick economic rebound once the pandemic is under control, Trump said in his executive order that without the ban the US “faces a potentially protracted economic recovery with persistently high unemployment”.

Making a targeted political statement, Trump said that the categories of would-be immigrants he is barring would have competed with “African-Americans and other minorities, those without a college degree, and the disabled” who are “at the margin between employment and unemployment”.

Although Trump had barred asylum-seekers from coming through the Mexican border, the order said that it will not limit the ability of anyone to seek asylum or refugee status.

There is a ban on all travelers from 28 European countries, China and Iran who are not US citizens or permanent residents.