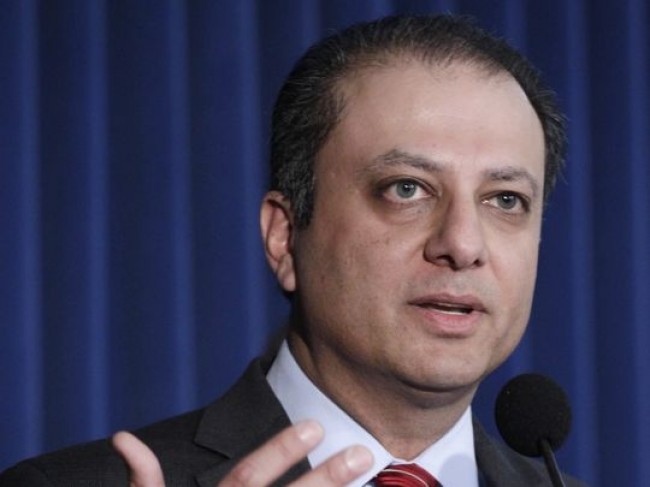 New York, Dec 1 (IANS) US President-elect Donald Trump is going to keep Indian American Preet Bharara in his job as a high-profile federal prosecutor with charge of Wall Street and important security matters in New York.

Bharara, who was appointed by President Barack Obama, told reporters after meeting with the president-elect on Wednesday that Trump asked him to continue as the US District Attorney for Southern New York and “I agreed to stay on.”

Bharara has the reputation of being a crusader against financial institutions that have been blamed for the recent great recession and have been attacked by Trump for causing economic hardship around the nation.

He has taken action against major banks like Citibank and JP Morgan Chase, forcing them to pay billions of dollars to the government to settle the cases.

He has prosecuted over 100 of Wall Street executives for criminal activities like stock trading irregularities using insider information.

They include several Indians like Rajat Gupta, the former head of the consulting company McKinsey and Goldman Sachs director, who served two years in jail for colluding with the Sri Lankan American hedge fund operator Raj Rajaratnam in a stock market scam.

The meeting with Trump and the offer to have Bharara is unusual both because he is a Democrat and an Obama appointee – the only one so far that the Republican has said he will keep on – and because despite its visibility, the job is not of the high-level that Trump is currently trying to fill.

Therefore, it shows the importance Trump attaches to the areas of potential prosecution that Bharara oversees.

Like Bharara, Trump is highly critical of Wall Street manipulations and irregularities, saying: “Wall Street has caused tremendous problems for us.”

“I’m not going to let Wall Street get away with murder,” Trump has declared, and Bharara would be his minion to ensure that.

Bharara has prosecuted several New York politicians for corruption. The senior-most among them is state assembly Speaker Sheldon Silver, a Democrat, who was given a 12-year sentence for corruption.

Bharara, whose full name is Preetinder Preet Singh Bharara, was born in Ferozepore in 1968 and immigrated to the US as a child.

He sparked a diplomatic stand-off between India and the United States in 2013 when he had a Dalit Indian diplomat, Devyani Khobragade, arrested and strip-searched over allegations that she had made a false statement in the visa application for her maid.

Other diplomats accused of similar offenses were not similarly treated by Bharara and the humiliating action against Khobragade, the Deputy Consul General in New York, brought retaliatory action against by India against US diplomats in India.

Secretary of State John Kerry expressed regret for the incident and the matter was diplomatically resolved with her being allowed to leave the US without prosecution.

Citibank paid a $158 million fine to settle a case Bharara brought against it for misleading the government about loans and in another case made a $7 billion payment to the government after Bharara began investigating its Mexican unit.