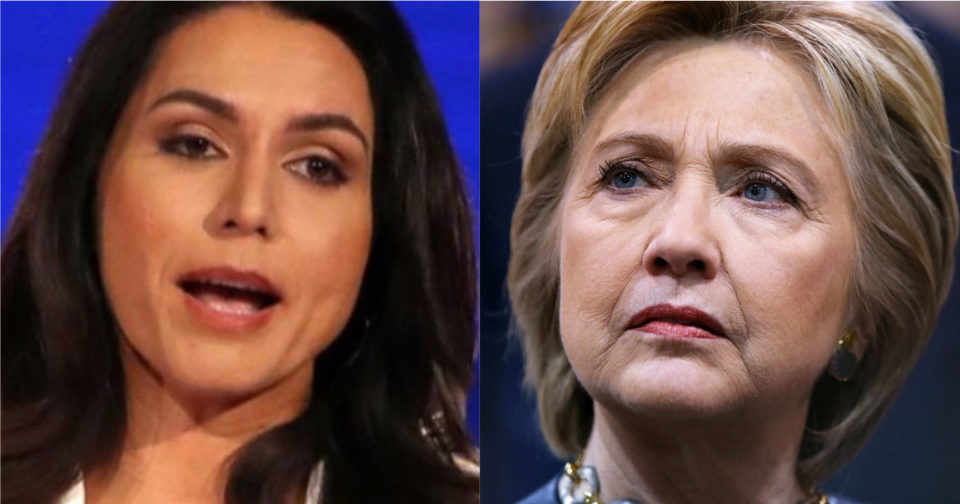 New York, Jan 23 (IANS) The outspoken, independent-minded Democratic Congresswoman Tulsi Gabbard has hit Hillary Clinton with a $50-million suit alleging that the defeated presidential candidate defamed her by calling her a “Russian Asset.”

“Whether out of personal animus, political enmity, or fear of real change within a political party Clinton and her allies have long dominated” Clinton lied about Gabbard, her lawyers said in the case filed in the Manhattan Federal Court on Wednesday.

Gabbard, the first Hindu-American elected to Congress, has had long-standing differences with Clinton going back to the 2016 Democratic primaries when she backed Senator Bernie Sanders for the party’s nomination.

Gabbard resigned as a vice chair of the Democratic National Committee in 2016 after accusing the party leadership of favouring Clinton instead of being neutral during the primaries.

The court paper filed in the case by her lead lawyer Brian Dunne said, “Clinton falsely stated that Tulsi – an Army National Guard officer and US Congresswoman who has spent her entire adult life serving this country – is a ‘Russian asset.’ Clinton’s false assertions were made in a deliberate attempt to derail Tulsi’s presidential campaign.”

Gabbard is a major in the Army National Guard and has served in combat zones in Iraq.

She continues to serve and even while in Congress she has been called up periodically for service.

Gabbard “has suffered significant actual damages, personally and professionally, that are estimated to exceed $50 million – and continue to this day,” Dunne said in the court filing that seeks damages from Clinton.

The US defamation and libel laws give wide leeway for attacking public figures like Gabbard, a member of the House of Representatives, and sets a higher bar for filing cases.

To meet the required standards, her lawyers, therefore, alleged that Clinton acted with “actual malice” and “reckless disregard of the truth.”

Clinton said in a widely distributed podcast in October that there is “somebody who is currently in the Democratic primary” who “(the Russians) are grooming…to be the third-party candidate.”

“She’s the favourite of the Russians. They have a bunch of sites and bots and other ways of supporting her so far.”

In response Gabbard had called Clinton the “personification of the rot that has sickened the Democratic Party.”

The court filing noted that Clinton’s spokesperson had reaffirmed her allegation by saying, “If the nesting doll fits” and called it “a reference to the universally known Russian nesting dolls (Matryoshka dolls).”

Clinton, who is still smarting from the defeat at the hands of President Donald Trump in 2016, has been trying to settle scores with those who had opposed her in moves seen as dividing the Democratic Party that is preparing to take on Trump.

She recently said that “nobody likes” Sanders and “nobody wants to work with him,” drawing criticism from several Democrats, including Gabbard.

Gabbard told a TV station, “It’s time to grow up, you know? This isn’t high school.”

She added, “There are real issues that people are struggling with and they’re wondering, ‘Why are our leaders not working for us?'”

Gabbard, who supported Sanders in 2016, is running against him for the Democratic nomination this time.

Gabbard has only 1.3 per cent support in the party according to RealClear Politics, the authoritative aggregator of polls.

Although she qualified for three of the party’s national debates, she has since failed to meet the qualifications for participation.

In the July debate she launched a stinging criticism of Kamala Harris, the senator of Indian and Jamaican-African descent, alleging that she put minorities behind bars for minor offences like marijuana violations.

From about that time Harris, who failed to get the support of African Americans, has tumbled in the polls and withdrew from the race for Democratic Party’s presidential nomination.