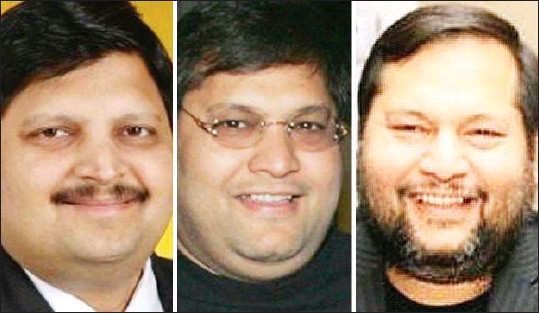 Washington, Oct 10 (IANS) The US Department of Treasury on Thursday announced it had imposed sanctions on the high-profile Gupta brothers – Ajay, Atul and Rajesh – of South Africa and their associate Salim Essa for corruption.

“Today, the US Department of the Treasury’s Office of Foreign Assets Control (OFAC) sanctioned members of a significant corruption network in South Africa that leveraged overpayments on government contracts, bribery, and other corrupt acts to fund political contributions and influence government actions.

“Specifically, OFAC designated Ajay Gupta, Atul Gupta, Rajesh Gupta, and Salim Essa for their involvement in corruption in South Africa pursuant to Executive Order (EO) 13818, which builds upon and implements the Global Magnitsky Human Rights Accountability Act,” the department said in a statement.

“The Gupta family leveraged its political connections to engage in widespread corruption and bribery, capture government contracts, and misappropriate state assets. Treasury’s designation targets the Guptas’ pay-to-play political patronage, which was orchestrated at the expense of the South African people,” said Sigal Mandelker, Treasury Under Secretary for Terrorism and Financial Intelligence.

“The Guptas and Essa have used their influence with prominent politicians and parties to line their pockets with ill-gotten gains. We will continue to exclude from the US financial system those who profit from corruption.”

The department said that Thursday’s announcement “demonstrates the US government’s unwavering commitment to supporting the rule of law and accountability in South Africa”.

“We support the anti-corruption efforts of South Africa’s independent judiciary, law enforcement agencies, and the ongoing judicial commissions of inquiry. Moreover, we commend the extraordinary work by South Africa’s civil society activists, investigative journalists, and whistleblowers, who have exposed the breadth and depth of the Gupta family’s corruption,” the department said in a statement.

The Gupta family and Essa, known for their close links to former President Jacob Zuma, have been implicated in state capture at several state-owned entities in South Africa.

The family, Zuma, some of his Cabinet ministers and his son Duduzane are at the centre of the ongoing State Capture Commission of Inquiry.

The Guptas have been implicated in various allegations of corruption, along with Zuma. Relations between the family and Zuma has been the focal point of much of the Inquiry into State Capture, currently being chaired by Deputy Chief Justice Raymond Zondo.

The US Department of the Treasury has designated 118 individuals and entities under act since it was signed in 2017.