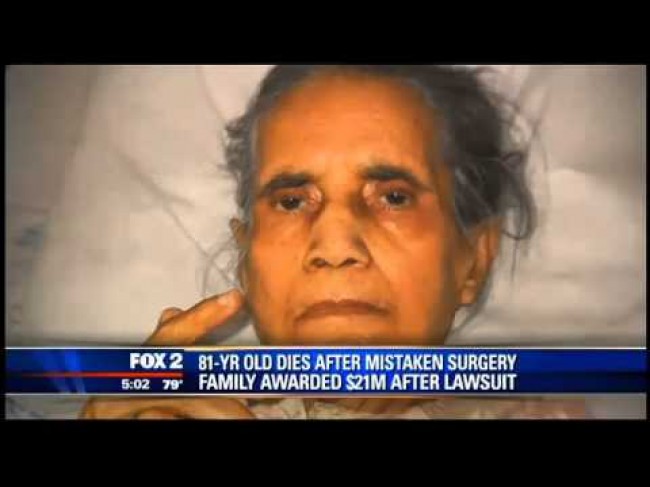 New York, Feb 16 (IANS) A court has overturned the $21 million awarded to the family of a woman of Indian descent who was operated on her brain instead of her jaw because of a hospital mix-up, according to media reports.

In its decision, The Michigan State Supreme Court cited a technicality in the way the lawyers for the family of 81-year-old Bimla Nayyar framed the case, which originally got them the multi-million-dollar award from a lower court jury, The Washington Post reported on Friday.

In 2012, Nayyar was admitted to the Oakwood Hospital in Dearborn for treating a dislocated jaw, the Detroit Free Press reported. But because her CT scan was mixed up with of another patient who had a skull fracture and bleeding in the brain, she was taken into an operating theatre. Surgeons drilled five holes in her skull, sawed a part of it and then replaced it after they found no bleeding or fracture, the newspaper said.

She died six months after the surgery and the family won the $21 million award in 2015 with the lawyers claiming it was a case of negligence by the hospital.

The award was first thrown out on appeal by a higher court in 2016, which said it as a case of medical malpractice, where rules are different and there is a cap on the maximum that can be awarded as damages, and not negligence, where there is no limit on damages.

The Post said that upholding that verdict, the Supreme Court blamed the family’s lawyers for arguing that Nayyar’s death was the result of ordinary negligence, instead of malpractice.

Chief Justice Stephen J. Markman wrote that it was a colossal blunder, the Post added.