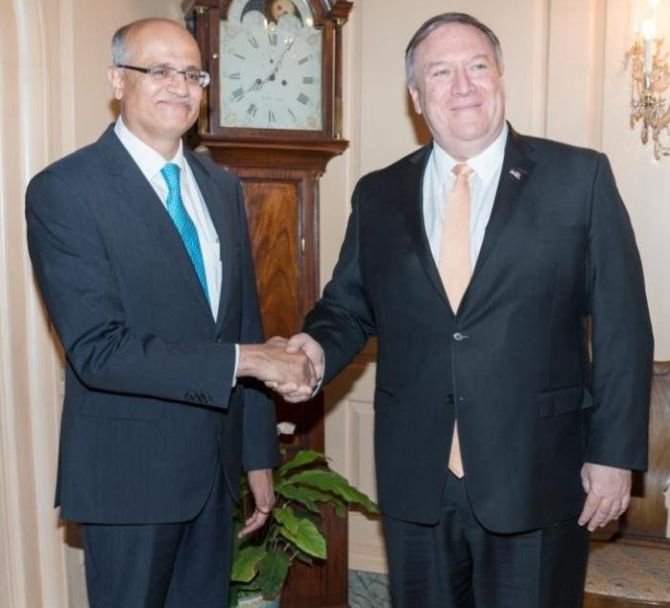 New York, March 12 (IANS) The US stands with India in fighting terrorism, US Secretary of State Michael Pompeo told Indian Foreign Secretary Vijay Gokhale during their discussions on the “urgency” of Pakistan taking action against terror groups, according to an official.

In the first high-level face-to-face India-US encounter after the February 14 Pulwama terror attack, Pompeo “affirmed that the US stands with the people and government of India in the fight against terrorism”, State Department deputy spokesman Robert Palladino said on Monday after the talks in Washington.

He said that they discussed “the importance of bringing those responsible for the attack to justice and the urgency of Pakistan taking meaningful action against terrorist groups operating on its soil”.

The Indian Embassy in Washington said in a statement: “Pompeo expressed his understanding of India’s concerns regarding cross-border terrorism. They agreed that Pakistan needs to take concerted action to dismantle the terrorist infrastructure and to deny safe haven to all terrorist groups in its territory.

“They also agreed that those who support or abet terrorism in any form should be held accountable.”

Gokhale “conveyed appreciation to the US government and to Secretary Pompeo personally for the firm support that India received from the US in the aftermath of the terrorist attack in Pulwama”, the statement added.

The two leaders appreciated “the significant progress and the quality of the India-US Strategic Partnership”, following Pompeo’s visit to India last September for the first Ministerial 2+2 Dialogue of the foreign policy and defence leaders.

He also apprised Pompeo about the recent developments in the region, it said.

India launched an attack on terrorist camp in Pakistan and an air skirmish between the two neighbours followed during which an Indian MiG-21 was shot down and its pilot, Wing Commander Abhinandan Varthaman was captured by Pakistan. He was later released after Pompeo’s intense diplomacy.

Later on Monday evening, Pompeo said at a news conference that during their talks he had asked India to join the US-led boycott of Venezuela’s oil.

“I’m confident that they too understand the real threat to the Venezuelan people.

“We’re asking the same thing of India as we are of every country: Do not be the economic lifeline for the Maduro regime,” he said.

He declined to say what Gokhale’s reaction was. “I certainly won’t characterise the conversations; they’re private conversations.”

The US and its allies have derecognised Nicolas Maduro as Venezuela’s President following the nation’s upheaval over last year’s elections that the National Assembly has declare invalid and recognised Juan Guaido, who proclaimed himself as the country’s interim President in Jnauary, as the country’s leader.

Palladino said that Gokhale and Pompeo “noted the strength of our partnership and discussed ways to further enhance cooperation, including on counter-terrorism”.

Gokhale and Pompeo “discussed our complementary visions for the Indo-Pacific, US-India defence cooperation, and the growing US-India economic partnership, including joint efforts to expand bilateral trade in a balanced and reciprocal manner”, he said.

Responding to Pompeo’s reference to bilateral trade matters, Gokhale “underscored the significant reduction in trade deficit in the last three years and conveyed India’s willingness to remain engaged with the US for a meaningful and mutually acceptable package on trade issues” the embassy said.

The Gokhale-Pompeo meeting took place against the backdrop of Trump ending tariff concessions worth $5.6 billion top India last week under the General Scheme of Preferences citing what he called New Delhi’s failure to provide “equitable and reasonable access” for US to its markets.

The embassy said that Afghanistan also figured in their talks.

At the height of the tensions between India and Pakistan last month, Pompeo had spoken by phone with Swaraj and National Security Adviser Ajit Doval and Pakistan’s Foreign Minister Shah Mehmood Qureshi in an effort to tamp down the rising hostility.

Indian-American Manju Goel to run for US Congress