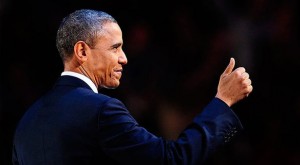 Washington, June 25 (IANS) As the US Supreme Court handed President Barack Obama a huge victory by upholding his signature healthcare law that opposition Republicans have tried to repeal countless times, he vowed to make it even better.

“Five years ago, after nearly a century of talk, decades of trying, a year of bipartisan debate, we finally declared that in America, healthcare is not a privilege for a few but a right for all,” Obama said from the White House on Thursday shortly after the verdict.

“Americans would have gone backwards and that’s not what we do, that’s not what America does, we move forward,” he said praising the apex court’s decision to uphold the subsidies in the law, nicknamed “Obamacare”.

“The Affordable Care Act is here to stay,” Obama said of the law that has extended cover to more than 15 million Americans who didn’t have health insurance before it was signed into law in 2010.

In a 6-3 decision, the court held the Act authorised federal tax subsidies to help poor and middle-class people buy health insurance nationwide and not just in states with their own exchanges to shop for them.

Only 16 states and the American capital of Washington have set up their own health insurance marketplaces and over 6.4 million Americans living in 34 Republican-ruled states which did not create such market places are dependent on Federal exchanges.

“Congress passed the Affordable Care Act to improve health insurance markets, not to destroy them,” Chief Justice John Roberts, a conservative, wrote in the majority opinion joined by another conservative and the four liberal justices.

“If at all possible, we must interpret the Act in a way that is consistent with the former, and avoids the latter,” he said.

In a dissent, Justice Antonin Scalia said “we should start calling this law SCOTUScare,” referring to the two times the Court has saved the law.

Challenge to the Act hinged on just four words in the law that they argued made subsidies available only to people buying insurance on “an exchange established by the state”.

Congress made the distinction, the challengers said, to encourage states to create their own exchanges and when that failed on a large scale, the Internal Revenue Service (IRS) tried to “fix” the law.

The income-based subsidies are crucial to the law’s success, helping to make health insurance more affordable and ultimately reducing the number of uninsured Americans.

All the Republican presidential candidates have vowed to repeal it with Louisiana’s Indian American governor Bobby Jindal making it the second of his top four objectives after “secure our borders”.

“I will replace Obamacare with a healthcare system that focuses on reducing costs and restoring freedom,” Jindal declared on Wednesday as he became the first Indian American and 13th Republican candidate to jump into the 2016 White House race.

Several other Republican presidential candidates quickly denounced the ruling with a “disappointed” front runner Jeb Bush saying “this decision is not the end of the fight against Obamacare”.

But Democratic frontrunner Hillary Clinton took to Twitter to praise the decision.

“Yes!” she tweeted. “SCOTUS affirms what we know is true in our hearts & under the law: Health insurance should be affordable & available to all.”