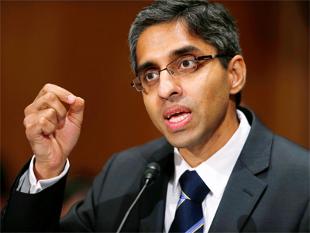 Washington, Dec 16 (IANS) Vivek Hallegere Murthy has made history as the youngest US Surgeon General and the first of Indian descent with his Senate confirmation in the teeth of strong opposition of powerful gun lobby.

The Democratic controlled Senate voted Monday 51-43 to confirm Murthy, 37 as ‘America’s doctor’ more than a year after his nomination with the Republicans dead set against him because of his support for gun control and President Barack Obama’s signature healthcare law.

Born in England, Murthy moved with his Indian parents to Miami when he was three.

He would become the leading US spokesperson on matters of public health.

He will also be the operational head of the 6,500-strong US Public Health Service Commissioned Corps, one of the seven uniformed services including army, navy, air force and marines.

Murthy, a bachelor, has said he will focus on preventing chronic diseases, efforts to curb smoking, and programmes to improve diets and combat obesity.

Applauding the Senate for confirming Murthy, Obama said “as ‘America’s Doctor,’ Vivek will hit the ground running to make sure every American has the information they need to keep themselves and their families safe.”

“He’ll bring his lifetime of experience promoting public health to bear on priorities ranging from stopping new diseases to helping our kids grow up healthy and strong,” he said in a statement.”

“Vivek will also help us build on the progress we’ve made combatting Ebola, both in our country and at its source,” Obama said “Combined with the crucial support for fighting Ebola included in the bill to fund our government next year, Vivek’s confirmation makes us better positioned to save lives around the world and protect the American people here at home,” he added.

A physician with the Brigham and Women’s Hospital in Boston and an instructor at Harvard Medical School, he co-founded an advocacy group in 2008 called Doctors for Obama, a national organization of 16,000 doctors and medical students.

Murthy has also founded two other organizations. Visions Worldwide focuses on rural health in India and on HIV/AIDS education in India and the US, while TrialNetworks is a software company focused on making drug development and clinical trials more efficient.

Murthy’s confirmation Monday on a 51-43 vote was largely along party lines. Just one Republican voted for him, while three Democrats voted against his confirmation.

Democrat party leaders had delayed a vote on Murthy’s confirmation until the lame duck session fearing some party members running for re-election from conservative states may not vote for him.

CAPAC Chair Judy Chu said Murthy’s confirmation “is a testament to both his own distinguished career and the great strides made by the Asian American and Pacific Islander community.”

Joseph Crowley, Democratic Co-Chair of Congressional Caucus on India and Indian-Americans said “the confirmation of the first surgeon general of Indian descent is a victory for the entire Indian-American community, whose young children will grow up knowing that anything is within their reach.”

Congresswoman Grace Meng said Murthy’s confirmation just a week after that of Richard Verma as the first Indian-American ambassador to India illustrated “the continued growth and influence of Indian-American community, and highlights the exceptional contributions that Indian-Americans make to our nation.”