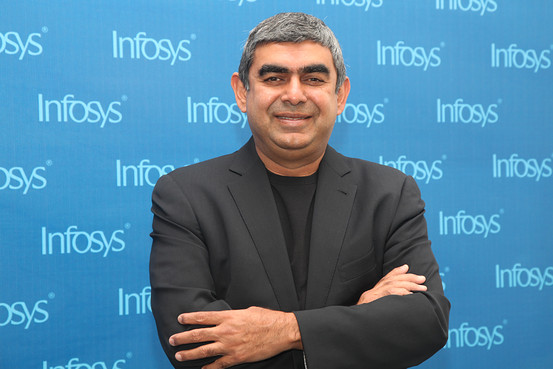 “We aspire to be the bellwether of the Indian IT industry once again in the next 18 months,” Sikka told IANS in an interview here.

Sikka has got cracking to renew the $8.3-billion company’s efforts to catch up with the industry’s revenue growth in double-digit (13-15 percent) from seven-nine percent projected for this fiscal (2014-15).

“Over the last two months I have been the CEO, I have had an opportunity to interact with a few dozens of our partners, about 100 customers and tens of thousands of our employees in India and other parts of the world,” Sikka said.

“We have been in the past a next-generation software firm and defined many dimensions of being a top services’ company. I believe we will get back to that and go beyond that to lead the industry again while maintaining our profitable growth,” he asserted.

Noting that the world was dramatically being reshaped by software and software-defined technologies, the former SAP executive said there was a great opportunity for every business to simultaneously achieve a duality by renewing its systems and processes to derive more efficiency out of them and to instrument them for analytics, mobility, social media and sensors as well as re-platforming them for the cloud to achieve better economy.

“The purpose of this great renewal the world over is to make the systems and processes relevant to the modern world and the emerging world and derive operational efficiencies from that,” Sikka said after piloting the company to a robust growth in second quarter (July-September) of this fiscal (FY 2015) and beating market estimates in topline (revenue) and bottomline (profit).

Call it the ‘Sikka effect’, the city-headquartered company Oct 10 reported a robust net profit and revenue growth in rupee and dollar terms for the quarter under review (Q2) year-on-year and sequentially, fuelling its blue-chip scrip to soar seven percent in trading on bourses last Friday.

“We had a very good quarter sequentially, with 3.1 percent revenue growth and 26.1 percent operating margin, though our banking product (Finacle) business did not have a great quarter. We believe the best is yet to come and we are looking forward for the company to scale new heights in the ensuing quarters,” Sikka affirmed.

Observing that each business complimented this renewal with a new set of offerings for achieving new customers and growth, Sikka said every company achieved transformation on the basis of education, learning and training their employees.

Admitting that the same framework of culture and learning applied to Infosys as well, Sikka said the company was renewing every service line and everything it offered on the basis of innovation, automation and artificial intelligence.

“We believe that these will revolutionise our back office services, maintenance services, infrastructure management services, verification services and other services we offer on the basis of technology. The renewal includes the way we operate, our internal system and processes and the way we engage our employees and customers,” Sikka pointed out.

Under the new leadership, the company initiated new platforms for Big Data based on open source technology, bringing artificial intelligence-based adoption technologies and creating new methodologies like working with Stanford University in the US on design thinking for entering into new areas and getting new clients in a systematic and innovative way.

“We believe that a next generation company like ours has a tremendous potential for growth with profitability and aspire to become the best of such an excellent service company,” Sikka claimed.

Clarifying that the company’s next growth phase would be built on the rich legacy he inherited from the co-founders, Sikka said new initiatives were to renew the existing systems and processes with innovation, automation and artificial intelligence to improve the customers’ operational efficiencies and enhance their productivity.

Since the global financial crisis in 2008 and during the subsequent recession period, Infosys faced several external and internal challenges, including a challenging business environment due to uncertain macro-economic conditions worldwide.

As a result, Infosys lagged behind rivals like TCS, Cognizant and HCL Technologies on revenue growth, operating margins and in winning big outsourcing deals.

During Murthy’s year-long tenure as executive chairman, the company also saw a dozen senior executives quit and an exodus of 36,000 techies in search of greener pastures.

Handing over the baton to Sikka, Murthy and another co-founder and vice-chairman S. Gopalakrishnan stepped down from their executive posts Oct 10.