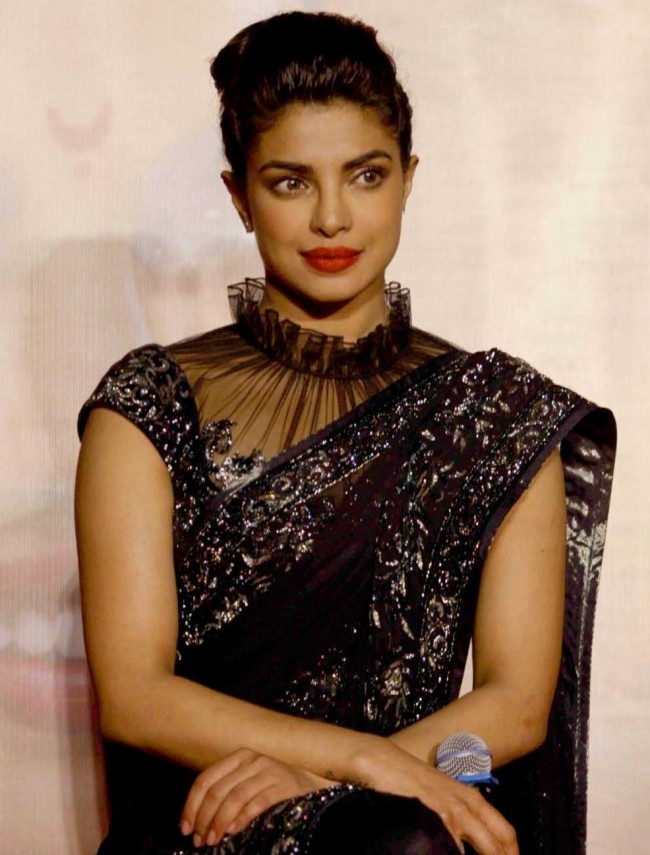 New Delhi, Jan 10 (IANS) She broke the monotony of Indian actors playing blink-and-you’ll-miss appearances in Hollywood by grabbing the lead role in American show “Quantico”. With a lot of appreciation — and awards — for her role, actress Priyanka Chopra says what worked for her in Bollywood also works for her in Hollywood.

“I think the same thing that worked in Hindi films worked for me internationally. I am not afraid of being myself,” Priyanka told IANS over the phone from Los Angeles a day before her red-carpet appearance at the Golden Globes.

“I think entertainment industry is full of too many wonderful, beautiful people and you can’t (just) be someone else. You have to stand out. You have to find your own uniqueness and that has to work for you. So those who want to be an actress, whether it is in America or in India, you have to find who you are and be comfortable with it,” she said.

Priyanka’s journey in showbiz started at the age of 17 when she was crowned Miss World. It was followed by her Bollywood debut in 2003 with “The Hero: Love Story of a Spy”.

Many in India rooted for her when she bagged the role of FBI agent Alex Parrish in “Quantico” for which she won the People’s Choice Award — the first South Asian actress to do so. The “Quantico” fame also got her a role in “Baywatch” movie, alongside Hollywood A-listers Dwayne Johnson and Zac Efron.

The year 2016 also saw her becoming the presenter at Oscar and Emmy, followed by an invitation to the annual White House Correspondents Dinner. She was conferred India’s fourth-highest civilian honour, the Padma Shri, featured in Time Magazine’s 100 Most Influential People of the world, and became the first Indian to come on the imdb list.

With so much of success, is she scared of failure?

“I don’t like it; so I don’t make room for it. It happens with everybody and it is something that you cannot sideline. It’s part of the game and you learn how to play it, and I hope I am playing it well,” the actress said.

She also feels that the constant support from friends, family and fans inspires her to achieve the best.

“I am always surrounded by people who love me. I have wonderful people in my life, encouraging me and pushing me forward; so I never felt that I am doing this alone. I feel support is the biggest strength a woman actually needs in this world. As soon as you have the support from people around you, you can achieve everything,” she said.

Of her production company Purple Pebble Pictures, she said: “When I set up this company, I was very clear that I wanted to give platform to young talent. It was very important for me to give opportunity to new talent. We are a very small company, but I want to make path-breaking films.”

She said she wanted to do movies with people who had not got support or a platform to show their talent.

“When I wanted to do movies, it was very difficult to get in because I was not from the industry; I did not know anyone. I don’t want my company to be like that,” said the actress who has produced regional films like “Ventilator” in Marathi, soon-to-release Punjabi film “Sarvann” and a Nepalese-Sikkimese movie.

“I like to make projects where I launch new people with the help of people who are experienced. That’s why I am doing the kind of films that I am doing,” she said.

“This is an exciting year. Season two of ‘Quantico’ is coming on January 23 and then ‘Baywatch’ is releasing in May. As producers, we are launching five films,” she said.

There have been reports that she is working with Sanjay Leela Bhansali again for a film. When asked by IANS, she said: “Sanjay sir and I always want to work with each other. I want to work with him. We did talk about doing a lot of things together and hopefully if it works out, that will be great.”

Yahoo to be renamed Altaba, CEO Marissa Mayer to step down

Taimur was to be named 'Faiz', says Kareena