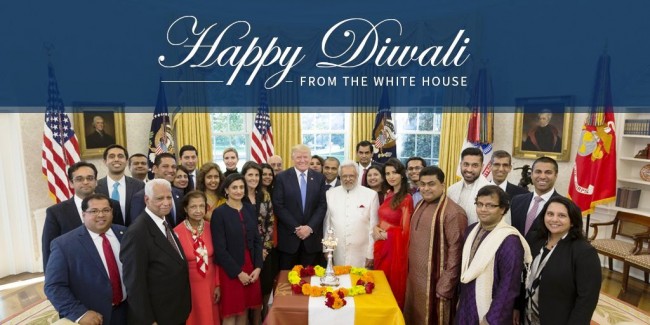 New York, Nov 7 (IANS) US President Donald Trump broke a 15-year tradition of holding formal Diwali celebrations at the White House this year with the festival falling amid the crucial midterm polls.

The Diwali celebration was started by former President George W. Bush in 2003 and was carried on by his successor Barack Obama.

Continuing the tradition, Trump held the celebration at the Oval Office, where he lit a traditional lamp last year.

This year, however, he is caught up in the elections, which took place on Tuesday after a whirlwind of campaigning that ended on Monday.

On Wednesday, he will be tied up dealing with the aftermath of the elections, which saw his Republican Party lose control of the House of Representatives, the lower chamber of Congress.

Secretary of State Mike Pompeo in his Diwali greeting issued on Wednesday hailed the contributions of Indian Americans.

“As those celebrating decorate their homes with vibrant lights, I would also like to recognize the achievements of our friends in the United States observing Diwali who make important contributions to our country on a daily basis,” said in his message.

Harvard professor to be honored with prestigious global health award