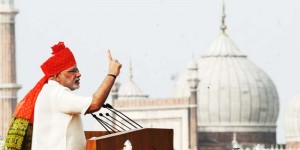 New Delhi, Aug 16 (IANS) Prime Minister Narendra Modi’s maiden Independence Day address, where he called for “political consensus” in the running of his government, was praised by several political commentators with one even rating him above Atal Bihari Vajpayee, the first BJP leader to hoist the Tricolor from the Red Fort.

“His address to the people was not limited to political agenda. He focused on the kind of role society has to play in nation building,” political analyst G.V.L. Rao told IANS.

“He stressed on the need to show more concern on the situation of women and how we can eschew discriminatory practices against women including female foeticide.”

Addressing the nation from the Red Fort, Modi Friday said he did not wish to run the government on the basis of majority. “We want to move ahead on the firm ground of agreement,” he said.

Pradeep Datta, a well known commentator, said there was a gap between what Modi said and what was being practiced by his government.

“There is an absolute gap between what he (Modi) is saying and what we have generally seen of him,” Datta told IANS.

“It will be excellent if consensus is given its due importance. But consensus alone is not important.

“He (Modi) has to give space for dissent which is more important than just taking the opposition along. Allowing dissent is very important in a democracy and that is something he is not renowned for,” Datta said.

Modi also gave a call to parliamentarians to adopt a village and work for its development. He spoke about building toilets for girls in schools and advised lawmakers to spend their funds to that effect.

This got a good response in the social media.

Manindra Thakur, a professor at the Jawaharlal Nehru University, explained the reason for such a response.

“After a long time, there is a prime minister who is able to communicate to the masses. Common people are impressed with such kind of rhetoric. In any case, after 10 years of Manmohan Singh and his infamous silence, people would like him (Modi) to speak like this,” Thakur told IANS.

Asked why Modi could score better than Manmohan Singh, experts said that for the average man, the only thing that matters is whether his leader is able to connect to him or not.

“In public life, what is really useful is your understanding of the government and people’s mind, rather than how scholarly a person you are,” Rao told IANS.

“Modi has been at the helm of a government for over 13 years. He has a very good understanding of what are the expectations of people and how to take the nation forward,” he said.

“There is a difference between a leader and a learned person. A leader may not be that learned but he develops a rapport with the public. Modi has developed that skill for communication,” he said.

Rao said the fact that Modi spoke extempore added to the positive response he fetched, as people assumed he was speaking from the heart.

“Making a departure from the tradition of using a written speech was a very wise move and that is why his speech was heard, read and talked about to such an extent,” he said.

However, Datta feels there was nothing much to cheer in Modi’s speech.

“I don’t think Modi’s speech was particularly interesting. There was too much focus on building toilets and sanitation. I think it shows a kind of reduction in thinking about the more complex challenges facing the country.

“Either he is de-politicising politics or he doesn’t really want to talk about the more important issues. Reducing Mahatma Gandhi to just a symbol for cleanliness is not very imaginative,” Datta said.

Asked who among Jawaharlal Nehru, Vajpayee and Modi was the best public speaker, experts were not unanimous in their opinion.

“They all were very, very highly rated prime ministers of their times. I think they represented three different eras,” Rao said.

“Nehru belonged to a very different era. We can compare Modi with Vajpayee. Vajpayee had more wit but Modi exudes strength from within. The confidence that ‘yes, I will do this for the country’ is refreshing to people.

“Vajpayee had a team and the restrictions of coalition politics besides the presence of another party stalwart L.K. Advani. Hence, may be Modi comes across as more confident to the average man,” he summed up.

Championing the Dark is Beautiful and Beauty Beyond Color movements