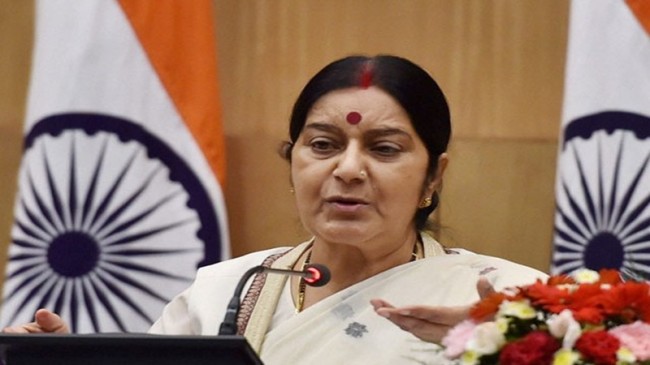 New Delhi, July 26 (IANS) External Affairs Minister Sushma Swaraj on Thursday said that India will raise the issue of changing H1B visa norms with the US at the 2+2 dialogue scheduled to be held on September 6 in New Delhi.

“We are already raising the issue formally at various fora. We are speaking on it with the White House, with state administration as well as with Congressmen… We will raise it humbly at the 2+2 dialogue on September 6 in New Delhi,” Sushma Swaraj told Rajya Sabha.

She said that although there has been “no major change so far” in the H1B visa policy from the US side but the prevailing sentiment in the US about tightening of visa norms was a cause of concern for the “Indian government, the opposition members and the entire House”.

“But yes, the apprehensions are there. The number of visas may be cut or the norms may be made stricter. But we are trying our best that this should not happen. I have raised it with my counterpart Rex Tillerson. The Finance Minister raised it with US Trade and Commerce Secretary and our Commerce Minister too raised it recently,” she said.

In February, the Trump government came up with a new visa policy that makes the procedure for issuing H-1B visas tougher. As per the new policy, the hiring company would have to prove that its H-1B employee at a third-party worksite has specific and non-qualifying speculative assignments in speciality occupation.

The India-US 2+2 dialogue involves the External Affairs and Defence Ministers of the two sides and the dialogue is aimed at elevating the strategic relationship between the two countries.

US Secretary of State Mike Pompeo and Defence Secretary James Mattis would participate in the dialogue.

Man Booker longlist captures a world on the brink