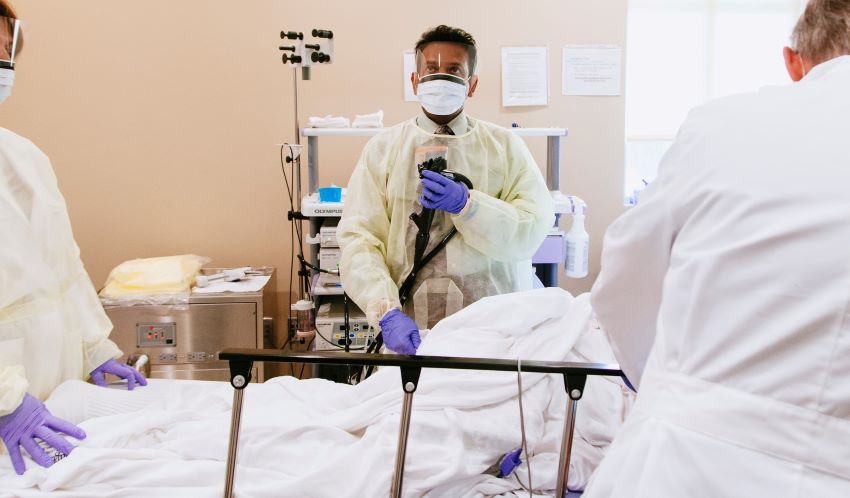 This is the final of a five-part series where noted Atlanta gastroenterologist and Emory School of Medicine professor, INDRAN INDRAKRISHNAN, MD* answers questions related to COVID-19.

We’ve seen a spike in covid-19 cases in recent weeks. What do you think needs to be done to get the virus under control?

In the US, more than 4 million people have been infected with the Covid-19, and at least 145,000 have died as of last week. Our country proudly ranks with Sweden, Peru and Brazil as having one of the world’s most rapid virus growth rates.

Newton’s third law states that for every action, there is an equal and opposite reaction. We are seeing the results of what we sowed in May and June of this year – both the public and the government are to be blamed.  The spike is not certainly due to increased testing. So, why did we get this spike from “nowhere”? You may also wonder why there are more younger ones affected in this spike compared to the beginning of the pandemic.  Considering the two weeks incubation period of Covid-19,  it is a no brainer to arrive at a reasonable conclusion that most of the spike came as a “gift”  from  “overwhelming”   public activities– ignoring physical distancing and wearing of masks in crowded places– starting from the memorial day holiday long weekend gatherings and then a series of protests, riots, marches, and rallies.

It has been shown with very clear scientific data that physical (social) distancing, wearing a proper mask, washing hands, and avoiding congregation especially indoor ones are the best ways of avoiding the Covid-19 infection. We declared victory prematurely and broke almost all these simple measures in the past couple of months.  Rachel Maddow from MSNBC lamented in her show that Americans are ” very serious” about Covid-19 and are lining up for hours to do the test but the administration has failed again to provide the test kits.  The “seriousness” starts with the public taking the precautions seriously to avoid COVID-19 and not just waiting in the line for testing!  Certainly, the government at local and national levels could have taken some stern actions like making wearing the mask mandatory, and banning congregations, especially indoor ones, to prevent the spike.

When Whitehouse task force expert, Dr Anthony Fauci was asked whether the Government could have done better in February /March to curtail the infection,  he gave the perfect answer: Yes, but hindsight is always 20/20!

We now have clear scientific information on risk factors, and this is no longer a hindsight matter.  CDC Director Robert Redfield commented that for every person who tested positive for COVID-19 this spring in the US, there were 10 undiagnosed at large.  As such, in addition to the safety measures, the public should cooperate with health care officials in tracing the contacts and isolation.

A systematic review and meta-analysis study in Lancet journal reiterated what we already know– physical distancing and wearing mask significantly reduces the infection rate. Another proven preventive measure is skipping indoor congregations, as a recent study showed that the virus lingers indoors for extended periods of time.   Should you host an event, try to have it outdoors and save the attendees information, if contact tracing is needed in the future. Dining in restaurants, traveling in public transportation systems including air travel are still riskier at this point, especially with the recent spike. It appears that decontamination of packages, mails, and frequent compulsive cleaning of surfaces are not so important as washing hands frequently.

One word about wearing the mask: It is the single most important preventive measure a caring and selfless citizen must follow to cut down the infection rate and save the community and fellow citizens.   How would one like it if a surgeon says that wearing /not wearing a mask is his choice/right in the operating room before performing surgery? The surgeon may not be even allowed there, let alone perform surgeries. Sometimes, there is a fine line between the rights and responsibilities of a citizen.  Currently, we have an environment filled with a very contagious and potentially lethal virus, and wearing a mask is a very simple measure with the least inconvenience while saving thousands of lives.   At this point, a law mandating wearing masks can reduce the infection rate.  Yes, it is always good to educate and counsel the public on wearing the mask, but this alone does not work always.  Think of a situation, where there is no speed limit on the road, but we educate the public on the adverse consequences of speeding of vehicles such as accidents, injuries, deaths. You can imagine how many would follow the advice!

New Zealand, South Korea, and Singapore rapidly identified the cases and traced the contacts, quarantined the sick ones and brought the infection under control. These measures could not have been implemented in the US due the fact that the US is a huge country in both land and population-wise with a wide variation of culture, business activities, demographics and social beliefs. Even with this, New York and adjacent states were able to bring the infection rate under control with an incredible acceleration of interventions and control measures when the spike was seriously high. It is yet to be seen whether we can achieve the same success in other states which had the recent spikes as there are many compounding factors in the degree of government intervention and mandates due to politicization of the Covid-19.

The public could have behaved better in the last few weeks to avoid this spike, but this did not happen. And the Government could have tightened measures with some mandates and rolled back some re-opening measures even with some political ramifications.  On the public side, one should wear the mask/ face cover, maintain physical distance, wash hands frequently, avoid congregations and help the public health officials with contact tracing and isolation. The Government should put political differences aside and implement mandates to force the people to follow actions such as wearing masks and delay / rollback the re-opening measures.

We can only hope for the best and wait and see! Bringing the spike of this infection under control is very important at this crucial time as we plan to re-open schools and colleges. Worsening of Covid-19 infection will have longer-lasting repercussions on children’s mental and physical health beyond impairing their education.

Some studies suggest that the death rate is decreasing even though COVID-19 cases are skyrocketing across America. Is this a good sign?

The death rate was indeed down at the beginning of the rise of the infection rate, but it is no more the case. And certainly, the administration cannot take credit for this decline! Neither does it mean that the virus is under control. There are many plausible reasons for this apparent decline in the death rate and the first one is improvements in treatment.  Although we have not yet discovered a miraculous drug to cure the illness, our front line physicians have become better in fine-tuning the management of critically ill Covid patients and now we have added few armamentarium in the pharmacotherapy like Dexamethasone and Remdesivir for better recovery. This is the main reason for the decline in the death rate.

In addition, older people have been more careful and wiser now and as a result, the percentage of their infection rate has started falling lately. We know that the virus mainly kills the older folks and with their declining infection rate, the overall death rate has also declined from a statistical point of view.  This time, the rise of the infection is more with relatively younger people and they usually do not get moribundly ill and this is another explanation for the apparent low death rate. However, most of the younger people are acting as if they are invincible and their fearless increase in overzealous social activities particularly during 4th of July weekend has fueled the explosion in the infection rate. Typically, the death data lags the case data by 4-5 weeks. We have already seen a slight increase in the death rate last week and may indeed see a sharp rise in the coming months.

*Dr. Indran Indrakrishnan is a well-known Atlanta based gastroenterologist and clinical professor at the Emory University School of Medicine. In 2018, Dr Indrakrishnan became the first American of Indian descent to receive a commendation from former Georgia Governor Nathan Deal for his exceptional work in improving the lives of Georgians affected by colorectal cancer and other gastroenterological diseases.

Dr. Indrakrishnan is a former president and board member of the Georgia Gastroenterology and Endoscopic Society and currently sits on the Georgia Board of Healthcare Force, as well as the boards for Rainbow Village, Fight Colorectal Cancer, Meals by Grace and Hindu Temple of Atlanta. He is also past president of Georgia Association of Physicians of Indian Heritage (GAPI) and currently on the board of trustees.

College admission: 5 ways students can make a difference during the pandemic