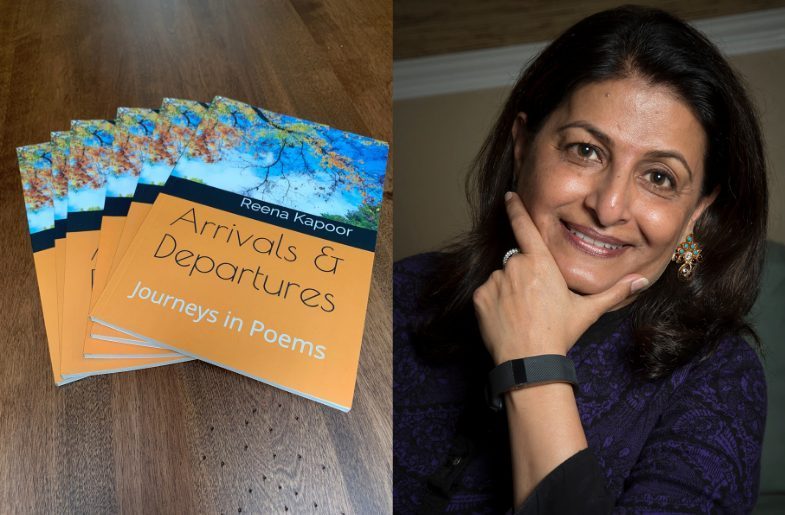 Arrivals and Departures: Journeys in Poems is a deep and relevant introduction to Reena Kapoor as a poet.  For over a decade, she has written poetry and her first play “Art of the Possible” was performed on zoom at EnActe Arts. This anthology is the beginning of a promising literary career.

With a Masters from  Northwestern University and an undergraduate degree in Engineering from Indian Institute of Technology, New Delhi, Kapoor is also a photographer and gardener.  A woman of many passions, Kapoor is also a life-long student of literature who presents herself in this collection of poems.  For the reader, it is also a unique opportunity to read the immigrant experience in verse.

Her foreword to this book begins with the self-doubt common to many writers about why others might care to read her poetry, but what follows negates the doubt demonstrating a reflective poet.  She then proceeds to explain her process of writing.  The anthology is divided into the following sections: Departures, Abundant Heart, Arrivals, Blink of an Eye, and Snatching Time, all relevant to an immigrant desi mother living in the Bay Area.  But they also have a global appeal.  The poems are steeped in the experiences of Kapoor’s life, with notes related to significant incidents.  She celebrates each crossing with joy and anguish, and sometimes a tragic despair.

As a desi immigrant myself, in her poems, I see my own thoughts, unwritten but often returning.  The mother in “This Mom of Yours”, who is still learning, is me as a mother who never feels fully prepared for each stage of my children’s life.  I am the mother who knows she will have to let go in “breathless”.

With her, you will celebrate the “little big things” of “Small Matters”.  And if you have memories of the vast flatlands of the Punjab, you will “dream of the mountains” with her in “Truant”

For each section she includes a photograph, an homage to her two other passions, gardening, and photography.  For more of her work, you can find her on instagram@1stardusty.

The themes will resonate with anyone living the fast-paced life of the Bay Area, themes indicating a richness of the past wiped down in the clean rooms of technology.  “The lists we crossed off”, “shallow footprints”, “burbs feign sanity”, imagery relevant to a Silicon Valley resident.

But what makes this unique is the poems of the forced immigration that took place in India in 1947. For the immigrant from the Sub-Continent, the haunting memory of the millions who perished in the Partition of 1947 is a scar that never heals. Even though this experience is shared across borders, it is primarily an experience of the Punjab and Bengal. Time was not on the side of the waning British Empire, so millions were sacrificed with a carelessly planned transition to freedom. The pain will linger until all the stories have been told.   Kapoor is the grandchild of Partition refugees on both sides and also an active citizen historian collecting stories for the 1947 Partition Archive. She is doing her part in telling these stories, in particular, the stories of the women who were sacrificed to honor in “nobody” etching the despair of the times- “The wounds seethe and breathe”.

The collection ends with another heartbreaking more recent memory of the rape of  Nirbhaya in India.  In “Owed”, Kapoor takes on the communal responsibility and wonders if the victim will “seek us out for answers”.

Kapoor’s themes are feminist, her voice is strong, yet tender, and her imagery is familiar. We can anticipate more of this lyrical imagery by Kapoor. The question is not if, it’s when.

*Anniqua Rana is the author of Wild Boar in the Cane Field. For more information, access www.selmanniqua.com

Arjun Mathur on International Emmy nod: I stared at my phone for 10 minutes

After I Was Raped: A powerful, compassionate, timely account of five survivors