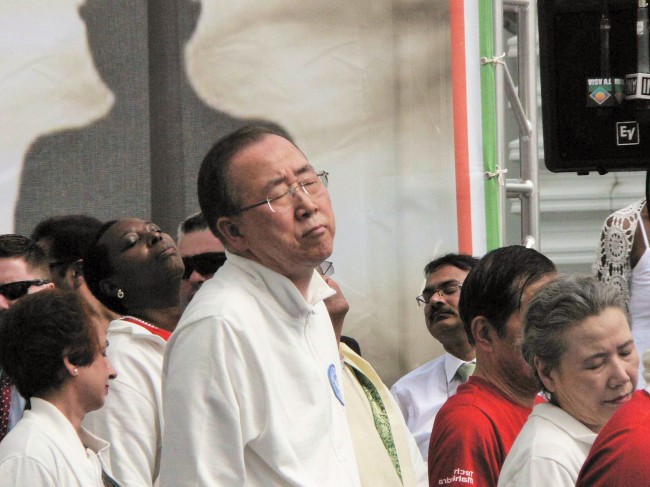 United Nations, June 22 (IANS) The International Day of Yoga (IDY) celebrations here sought to symbolize the unity of humanity as people from around the world gathered Sunday in unique observance of an Indian proposal sponsored by 177 nations and endorsed by all 193 UN members.

People of all races and religions, nationalities and political persuasions joined to perform the 35 asanas drawn from a millennia-old science of the body and mind on the shores of New York’s East River.

School children dressed in red sat with the powerful. UN Secretary-General Ban Ki-moon was clad in a plain white yoga-themed track suit. Diplomats, rising in unison to do the asanas, called out by the yoga guru Ravi Shankar of the Art of Living movement.

One of IDY’s aims is to promote respect for the environment, a topic of great urgency now. Ban quoted from Prime Minister Narendra Modi’s UN speech last year: “Yoga is not just about exercise; it is a way to discover the sense of oneness, with yourself, the world and nature.”

Symbolically, a monarch butterfly fluttered into the shamiana and hovered over the children getting ready for their yoga practice.

The shamiana with a transparent roof had been rigged at the UN plaza because of the rains forecast for the day. There was a thunderstorm the previous night and rain in the morning. Dark clouds hung ominously over the city.

But Indra, the god of rain, let Surya, the sun, through just in time for the celebration. The Summer Solstice sun shone on the city as the celebrations got underway at the UN and at the Times Square, where 30,000 people assembled for the second largest yoga performance of the day, second only to New Delhi’s 36,000.

Students had come from far and near to the UN.

Divyanshu Singh, a Class 12 student from City Montessori School in Lucknow, was among 50 students from India who came to New York to perform yoga exercises. “It is an opportunity of a lifetime,” he said. “It is refreshing to see yoga making an impact on the world.”

From New York’s suburban Scarsdale came Giselle Omtieki, one of the youngest participants. “It is truly fascinating that young people from around the world get together to experience yoga,” she said.

Elizabeth Resch said saw a role for yoga in promoting the UN’s development goals. The Austrian is an intern at the UN office working on developing the post-2015 development agenda. She said yoga can integrate the world and make it a better place.

While its physical aspects made it like a sport that she said she enjoyed, yoga had an important place in developing her consciousness.

For some yoga was a mission. Kripa Devi Denis Licul represents Yoga in Daily Life orgnisation. She said she began practising yoga in her native Croatia where it was propagated by Vishwaguru Maheshwarananda.

“We promote yoga of health and of inner peace,” she said. “Yoga is the path to inner transformation and the balance it creates leads to the realization that humanity is one.”

People of different religions can come together and discover their common humanity for peace, she added.

External Affairs Minister Sushma Swaraj emphasised in her speech that yoga was not a religion and should not be seen as belonging to any particular religion. “It is a science,” she said.

Fortyseven of the 56 members of the Organisation of Islamic Cooperation were among those who co-sponsored the IDY resolution, and not one opposed it.

While some Christian fundamentalists have denounced yoga and some Catholic leaders have cautioned their followers about it, there was little sign of the opposition at the UN or at the celebrations.

A sizeable portion — if not the majority — of the participants at the celebrations were drawn from Christian traditions.

Tulsi Gabbard, the only Hindu member of the US Congress, who spoke at the UN celebration and at the Times Square festivities, brought home to America the message of yoga.

The Democrat from Hawaii, who is not of Indian origin, is also an yoga instructor and had served with the US military in Iraq.

Wisdom and spiritual was in everyone but they may lie dormant; yoga can awaken them, she said. This is why the world needed yoga.