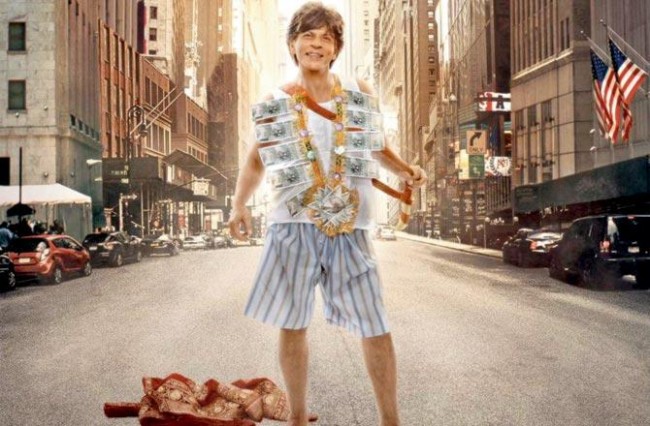 Here is the sad and frustrating irony of “Zero” : Told in the safest (read predictable), most conventional (read lazy, method imaginable), it is a story of a vertically challenged man enacted by a Superstar — whose real life story is much more inspiring than his reel life.

Standing four feet two inches tall, Shah Rukh Khan as Bauua Singh from Meerut, is no different from being himself — confident, cocky and sarcastically brash.

His main peeve in life is his height but that does not prevent him from aspiring to love the renowned Bollywood actress Babita Kumari (Katrina Kaif).

But then, our hero has a past. Tucked into the recesses of his being, is the love of his life, the astro-scientist Aafia Yusuezai Bhinder (Anushka Sharma). How they meet, fell in love and their romance bloomed, forms the crux of the tale.

While being fumbling and funny, Shah Rukh Khan holds you in rapturous attention with his shenanigans. You could say his personality and his performance are both in an “overall” style.

Anushka shines as the scientist suffering from cerebral palsy. She steals your heart while sitting on a wheel-chair and in command. With grace and strength, she is consistent in her speech and mannerisms.

Katrina is diligent and it shows in her performance. As an eternally sloshed actress disillusioned in romance, she appears like a modern day Meena Kumari.

Among the supporting cast are: Tigmanshu Dhulia and Sheeba Chaddha as Bauua’s parents, Bijendra Kala as the match-maker Pandeyji and Mohammed Zeesan Ayub as Guddu Singh the semi-blind, one-eyed sidekick of Bauua. They all have their moments of on-screen glory. Abhay Deol as Babita’s love interest is wasted in a miniscule role.

It is the style of narrative with the emphasis of talking heads like Guddu Singh and Pandeyji explaining and propelling the plot that is dispiriting.

Also, the poorly crafted characters and jump in timelines makes the entire tale so sketchy that you don’t invest in the characters.

The only moment one comes close to the characters is when Aafia tells Bauua: “In the 39 years of your life, did you ever find anyone to look in the eye and talk to the person like a friend.” During this moment, the bond seems platonic yet believable.

Similarly you realise the ruthlessness one witnesses in the film industry after Babita concocts a story about her parents. While her fabricated story is novel and interesting, the trait is expectable and she delivers it convincingly.

The shapelessness (read scenes ending abruptly), and meandering plot (read unnecessary detour from the subject), the narrative at times becomes tedious, especially during the second hour, when patience starts to wear thin.

While nearly all the songs in the film beautifully blend with the narrative, it is the song Issaqbaazi which features Salman Khan, Remo and the choreographer Ganesh Acharya that appear forced.

There are moments when Remo and Ganesh seem unenthusiastic about their involvement.

Overall, while the film opens with an intriguing and engaging scene, the overall packaging despite being fantastical, lacks the punch.