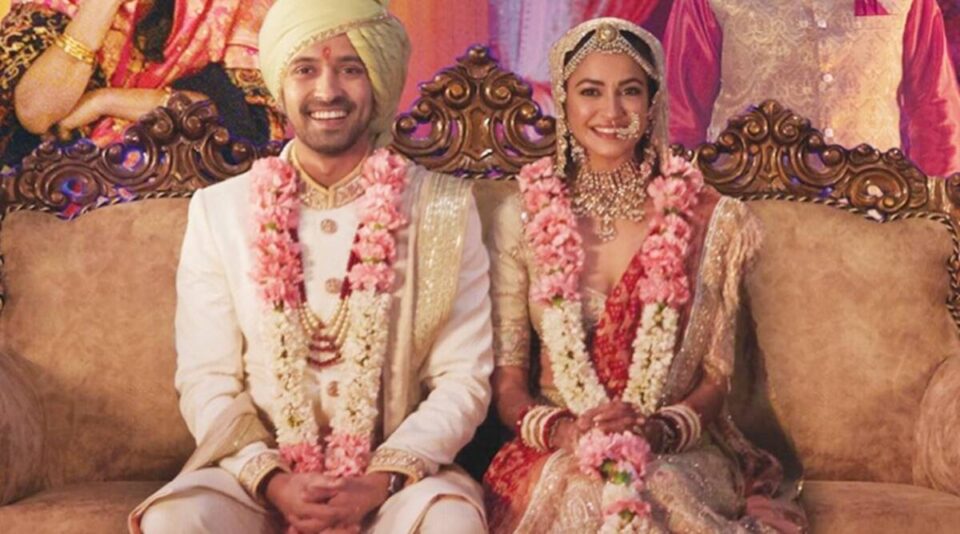 A concoction of the theme of Sairat and remnants of a Priyadarshan movie, 14 Phere takes the viewer on big fat Indian wedding rides, two times over. Hence the title. Directed by Devanshu Singh, 14 Phere has an amusing and clever premise with charming leads Vikrant Massey and Kriti Kharbanda elucidating a gentle and warm screen presence that is easy on the eyes.

The opening is pleasantly surprising with leads Sanjay Singh (Vikrant Massey) and Aditi Karwasra (Kriti Kharbanda) already in love and in a live-in relationship enjoying cushioned jobs with possible US transfers on the horizon. While their lifestyle is reflective of the Delhi upper echelon, their families are still rooted in deeply conservative beliefs. So, when the duo decides to get married, the age-old conflict of families opposing marriages outside of their own communities presents itself. It does not help that Shweta, Sanjay’s sister elopes with a guy from a different caste. So the couple hatch an elaborate plan with stage artists Amay (Jameel Khan), Zubina (Gauhar Khan) and friends to convince both sides that they belong to each other’s communities. A series of misadventures later, the plan begins to crumble, and their dream of marital bliss seems a distant reality.

Phir se phere ki kahani, you ask? Haan ji, with a slight twist. The boy and the girl decide to conjure up an entire family, complete with hired parents, to visit each other’s family homes. Once their families are convinced that all is well and no barriers are broken, the idea is for the couple to take saath phere, over two weddings in two different traditions.

Marriage in India is an extravagant exhibition of caste and class, and in some parts, like the one the protagonists’ parents belong to, caste factors in more. Both from affluent families, the Rajputana guy and Jatt girl are willing to go to any extent to keep up pretenses that keeps their families happy. Though not exactly in the ‘Sairat’ universe, the nonchalance about the family patriarch’s decision to kill the eloped sister is quite disturbing.

The beginning holds a good promise. It surely helps to have the talented Massey as male lead, whose chemistry with Kharbanda is quite enjoyable. Performances and dialect proficiencies of the leads and supporting characters are delightful. The banter between Jameel and Gauhar are a treat to watch. Yamini Das’s Sarla exudes enough endearing warmth for the audience to believe her son Sanjay would want to stay back in India for her sake. Her most mushy moment with her daughter-in-law is backed by the melodious number.

Singh’s attempt to weave in issues of casteism, honor killing and dowry in a social comedy are commendable. But the treatment of the narrative is far too superficial to address an immensely deep-rooted problem in society. Humor seems slightly misplaced in certain parts when, for example, after the directors portrays cruelties of both families (which in certain parts unfortunately is a reality), to expect the viewer to view honor killing and patriarchy in a comedy construct. While the final act does attempt to convey the senselessness of these social evils, the need for some flesh to bite into lingers on.

If you are in the mood for a simple, family saga and clean comedy, this can easily be your pick for the weekend. 14 Phere is streaming on ZEE5.

8 star biographies that show the unknown sides of stardom

200 Halla Ho is a well-balanced tale of mob revenge

Where can we see these movies? Are they on Netflix?