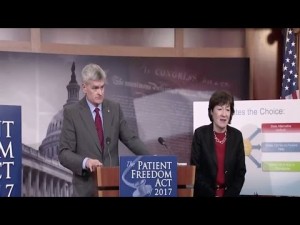 Washington, Jan 24 (IANS) Two Republican senators presented on Monday their party’s first bill to replace the Affordable Care Act signed into law by ex-President Barack Obama in 2010, under pressure from their party and recently elected US President Donald Trump to rid the nation of Obamacare.

The plan, introduced by Senators Bill Cassidy and Susan Collins, contains less drastic changes than some Republican proposals, to the point that it could win the backing of some Democrats should it be sent to Congress for approval, EFE news reported.

According to the senators’ bill, much of Obamacare’s taxes would be maintained in order to provide funding for the replacement plan, while giving states the choice of keeping the existing system or not.

Under the bill, known as the Patient Freedom Act, state legislatures would have the option of keeping Obamacare within their respective territories, with all its subsidies, mandates and protection for people with pre-existing conditions.

Other states, the senators said, could choose an alternative plan that would offer a uniform tax credit linked to a healthcare savings account to help people pay for a basic, less complete medical insurance policy, EFE news added.

Lawmakers hope the ability of Democratic states to keep Obamacare will add enough Democratic votes in favour of the legislation to reach the 60 votes needed for Senate approval.

“At some point in this process, we’re going to need a bill that can get 60 votes…So, California and New York, you love Obamacare? You can keep it,” Cassidy said with reference to historically Democratic states that support the ACA.

However, the plan is far from achieving a consensus among Republicans, and was swiftly rejected by the Senate’s Democratic minority leader Chuck Schumer.

“While I sympathise with my two colleagues whom I respect a great deal and who understand that repeal without replace would be devastating for our country, their proposal would create chaos, not affordable care, for millions of Americans,” Schumer said in a statement.

The plan could also face the rejection of conservatives, who have been inflexible about repealing all of Obamacare, even its taxes.

Republicans, inspired by the arrival of Donald Trump to the White House, began the legislative process to repeal Obama’s Affordable Care Act several weeks ago, yet this is the first document to offer a concrete alternative to the existing healthcare system.