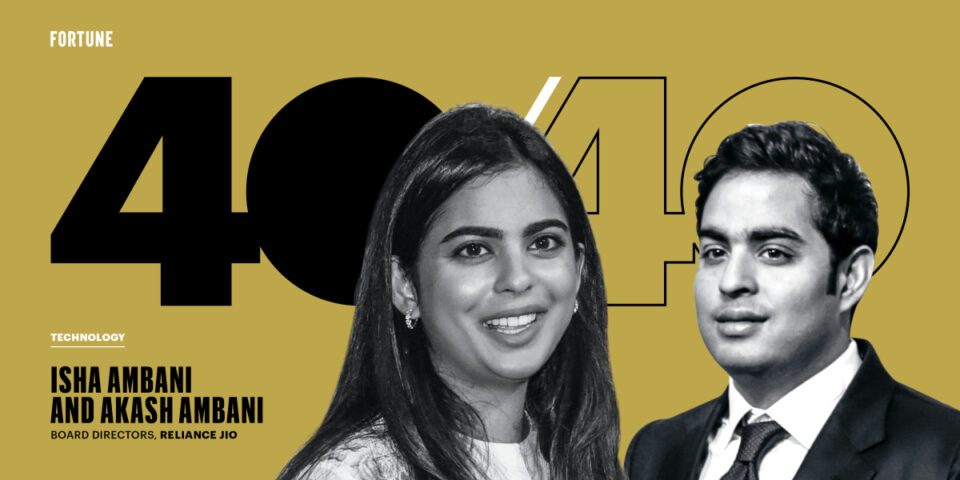 New Delhi, Sep 3 (IANS) The twin children of billionaire Mukesh Ambani, Akash and Isha, have made it to the Fortune’s latest ’40 Under 40′ list of influential people around the world.

The Ambani scions, who will celebrate their 29th birthday next month, feature in the technology section of the list where they have got company from India’s leading edtech startup Byju’s founder Byju Raveendran and Xiaomi India Managing Director Manu Kumar Jain, among others.

“Akash and Isha Ambani are the twin children of Reliance’s Chairman and Managing Director Mukesh Ambani, who happens, not coincidentally, to be India’s — rewind, Asia’s — richest man,” Fortune said.

“Reliance is a family business. Akash joined the company in 2014 after receiving an economics degree from Brown University. Isha joined a year later, following stints at Yale, Stanford and McKinsey,” it added.

Fortune credited Akash and Isha for helping seal the company’s recent megadeal with Facebook and for major follow-on investments from tech giants like Google, Qualcomm, and Intel.

“Recently, Akash and Isha helped launch Jio Mart, a venture that aims to challenge Amazon and Walmart’s Flipkart for command of India’s massive and fast-growing online shopping market,” Fortune said, adding that even heirs have to earn their keep.

Byju’s CEO Raveendran, 39, made it to the list for showing that it is possible to build a massively successful online education company.

Since its founding in 2011, Byju’s, which has emerged as the biggest education technology company in the country, is now worth more than $10 billion.

The US based publication’s list this year includes 40 influential people under 40 years of age in five categories — finance, technology, healthcare, government and politics, and media and entertainment.

Another prominent Indian who has made it to the list (in the healthcare segment) is Adar Poonawalla, the CEO of Pune-based Serum Institute of India (SII), which is working towards introducing Covid-19 vaccines from AstraZeneca and Novavax in India.

“Few people on the planet are more in demand right now than Poonawalla,” Fortune said.

Founded more than a half-century ago by Poonawalla’s father, SII happens to be the world’s largest manufacturer of vaccines.