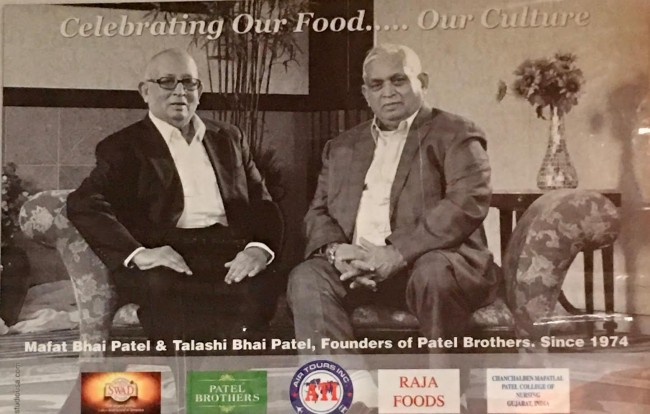 When 23-year-old Mafatbhai Patel left his small village of Bandu in Gujarat’s Mehsana district for the US in 1968, little could he have foreseen his future as co-founder and head of the sprawling multi-million dollar Patel Brothers empire. The journey was to fulfill his father’s dream “that one of his sons should go to America.”

“There were a couple of others from our village who had come to the US in 1958 and ’60. They encouraged my father to send me here,” he reminisces. Already married and the father of three, a son and two daughters, the future entrepreneur had to leave his family behind to make the long trip to the unknown.

Patel comes from a farming family, but he had gone to college in the neighboring town and was equipped with an electrical engineering degree. After finishing grad school at Indiana University, Patel moved to Chicago and joined Reliance Electric, a Japanese owned company which was later taken over by Exxon.

Soon, his wife Chanchal and his three kids Rakesh, Mina and Rita joined him. A second son, Swetal was born on US soil in 1971. His brother Talashibhai also arrived around the same time, and found work on the factory floors of Reliance.

The two families lived together, worked hard and endured the cold Chicago winters. The brothers are married to sisters, which made adjustments easier. However, they struggled with food. In the America of the early 1970s, cooking a wholesome Gujarati vegetarian meal was difficult. Without the right ingredients, substitutions were the norm- chick peas instead of dal, bread and butter in the place of rotis. They yearned for the smells and tastes of home. Then, the brothers heard from a friend that he was selling his 800 sq. ft.  grocery store on 2034 West Devon Avenue. They bought the store for $1500 in 1973, and opened their first Patel Brothers store in 1974.

For 16 years, Mafatbhai kept his day job and helped in the grocery store in the after-hours, working 18 hours on week days. While he was the brains, his brother Talashibhai was the labor in charge of the day to day operations of the store. Talashibhai’s wife Aruna opened the store at 10. Mafatbhai, who worked the 7 to 3 shift at Reliance, manned the store from 4 pm up to closing time. His wife Chanchal took care of all six children at home.

“The arrangement was only possible because our wives were sisters,” laughs Mafatbhai, of their joint living and working arrangements. The two families continue to live together as one unit, albeit in different buildings. Chanchal passed away after battling cancer in 2004.

Initially, the brothers bought locally from an Arabian (Middle Eastern) store in New York. “We took a van and drove to NY. We packed a few cases of pickles, dal… whatever we needed. Everything was loose, so we had to repack everything ourselves,” Mafatbhai says. “In those days, there was no Food and Drug Administration or the USDA to bother us.”

The brothers started importing in 1976. The following year, they opened their second store in Chicago to provide occupation for their sister and brother-in-law who arrived from Gujarat.

By the year 1981, they were ready to expand again. They opened two stores in Houston and Atlanta, two cities with large Indian populations. Their boldest move was to open a store in New York in 1983. With expansion, came the need to have warehouses to eliminate middle-men. Hence Raja Foods was born, and warehouses opened over the years in Atlanta, Chicago, New Jersey and Houston. When Mafatbhai’s older son Rakesh came aboard Patel Brothers, he acquired the Swad Brand in 1992.

The first Patel Brothers in Atlanta was a nondescript store in Avondale Estate, a far cry from the 23,000 sq ft buzzing current store that is housed in Patel Plaza, currently the largest shopping center in their network. A brother-in-law was put in charge of the store until Kalpesh Patel, Chanchal’s brother’s son, took over in 2004.

It is a business tradition for family members who arrive from India learn the ropes of the trade at one of the stores. Then, in six to seven years, when they have honed their business skills, they are ready to head a new store in a new city. Kalpesh, who worked in one of the Chicago stores was bound for New York in 2003 to head a store in New Jersey. At that point, came the news that Harshad Patel of Sreeji Groceries wanted to sell his store in Decatur.

“There were several people to take care of the New York/New Jersey region, but nobody in the family wanted to come to Atlanta,” says Kalpesh. Taking it as an opportunity to develop the Southeast region, Kalpesh moved to Atlanta in July 2004. Very soon, Patel Brothers opened in Charlotte and Raleigh. Today, there are eight Patel Brothers stores in the Southeast. The 9th store is scheduled to open doors in Charlotte and the 10th in the Suwanee/Cumming area in March 2018. Nationwide, this store will take the tally to 54 stores.

Keeping it all within the close-knit family is perhaps one of the ingredients of the Patel Brothers success story. “In our family, all cousins are brothers,” says Kalpesh. “That is how close we are.”

Hard work, honesty and community relations are the other reasons, according to Mafatbhai. Today, there are over 150 members of the family involved directly in the business.

“I am proud to say that nobody in the family has ever collected unemployment,” he jokes. Even the third generation of Patels, who are CPAs and attorneys, eventually come back to the family fold after gaining experience in their fields. There is never any friction within the large family because each center only reports to Chicago, insists Kalpesh.

Among Mafatbhai’s sons, Rakesh, a finance guy, oversees new structures and is responsible for developing the swanking shopping centers around the country. His younger brother Swetal is a marketing professional, and handles purchasing.

Mafatbhai is now 73 years old and has semi-retired. He spends time visiting his many stores across the country. He also devotes time to his social and charitable endeavors in India which includes a nursing college in his wife’s name in Gandhinagar (which was inaugurated by Narendra Modi who was then chief minister of Gujarat), and a burns center in Anand, in collaboration with AAPI (American Association of Physicians of Indian origin).

He also continues to see lofty dreams. “I want to see 100 stores in my lifetime, “he says. With the growth graph and formidable reputation this Indian grocery chain has had, there seem to be no impediments to Mafatbhai’s dream bearing fruition.

In the 13 years that Kalpesh has called Atlanta home, Patel Brothers has entrenched itself firmly in the community’s psyche. Apart from being the most successful Indian store in the region, Patel Brothers is known to give back to the community through cultural and social event sponsorships.

The new 40,000 sq ft Patel Brothers in Suwanee will be among their largest stores (to be superseded only by the upcoming 60,000 sq. ft. store in Naperville, IL). The sparkling shopping center is being developed on a 14-acre property and is currently being leased out.

“We are targeting a March opening, just in time for Holi,” says Kalpesh. The Suwanee store will have an abundance of produce, along with the other products that shoppers are used to.

This is welcome news indeed, for the burgeoning Indian population in the Suwanee/Cumming/Johns Creek areas.

“Mafatbhai says. “In those days, there was no Food and Drug Administration or the USDA to bother us.”” –
Thank the FDA/USDA that now they bother you and other grocery chains for better, cleaner products for Consumer.
Nothing exceptional about this story – A 23 year old man with enough money to get a Masters from Indiana University who starts a grocery store (now chains). Remarkable but not exceptional.

I would have to disagree with AJ. What they did is truly exceptional! As a kid my parents used to goto the first store on Devon.