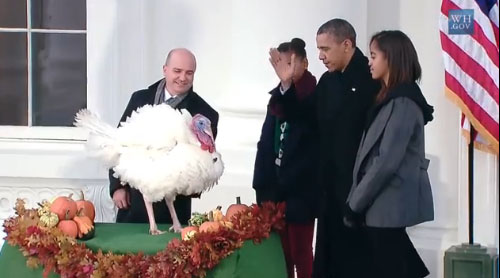 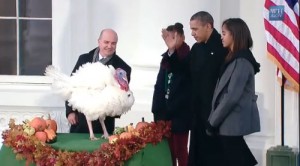 Washington, Nov 30 (IANS) Popcorn the turkey escaped with a presidential pardon, his backup Caramel was also spared, but some 45 million other birds were not as lucky as Americans made a meal of them to celebrate Thanksgiving.

There is no more a sacred ritual for this all American holiday that began with the Pilgrims, early settlers of Plymouth Colony in present-day Plymouth, Massachusetts, holding a three-day feast in the fall of 1621 to celebrate a bountiful harvest, than the carving of a turkey.

Americans travel across the country to be with their families this day since Abraham Lincoln declared the last Thursday of November a national holiday 150 years ago, and celebrate Thanksgiving with a feast of turkey, sweet potatoes and cranberries followed by pumpkin pie for dessert.

“The office of the presidency — the most powerful position in the world — brings with it many awesome and solemn responsibilities,” began President Barack Obama as he got the holiday festivities rolling with a ceremony on the White House lawns a day before Thanksgiving.

“This is not one of them. But the White House Turkey Pardon is a great tradition,” he added amidst laughter as he pardoned Popcorn, one of the two turkeys provided by the National Turkey Federation for the annual ritual.

Though only Popcorn got an official pardon he and companion Caramel will spend the holiday season at Mount Vernon, George Washington’s riverside estate, about 15 miles from the capital, before retiring at the two-acre Turkey Hill Farm at Morven Park in Leesburg.

Besides consuming nearly a sixth of about 242 million turkeys raised in 2013, Americans polished off mounds of some 768 million pounds of cranberry and 2.6 billion pounds of sweet potatoes produced in the US in 2012, according to official statistics.

Thus fortified, Americans set out for another great holiday adventure – camping in front of malls and retail outlets in freezing temperatures waiting for the midnight opening for what is known as Black Friday when everything from socks to television sets is on offer at throwaway prices.

President Franklin Roosevelt had ordained that Thanksgiving should always be celebrated on the fourth Thursday of the month to encourage earlier holiday shopping, never on the occasional fifth Thursday.

But with holiday season still six days shorter than in 2012, more than a dozen major stores from Target to Toys R Us opened on Thanksgiving Day and stayed open through Black Friday.

Violence flared up at many places as shoppers slugged it out for the best Black Friday deals with some 152 million bargain hunters expected to pour into stores over the Black Friday weekend, according to the National Retail Foundation.

Despite the jump from 138 million shoppers last year, the federation predicted that holiday sales will increase a marginal 3.9 percent to $602.1 billion. That’s higher than last year’s 3.5 percent growth, but below the 6 percent pace seen before the recession.

The run on the malls came even as a CNN/ORC International poll indicated that less than a quarter of Americans believe that economic conditions are improving, while nearly four in ten say the nation’s economy is getting worse.

But it’s not all over yet. For after Black Friday comes Cyber Monday when bargain hunters get another chance to shop till they drop with more deals online minus the crowds.