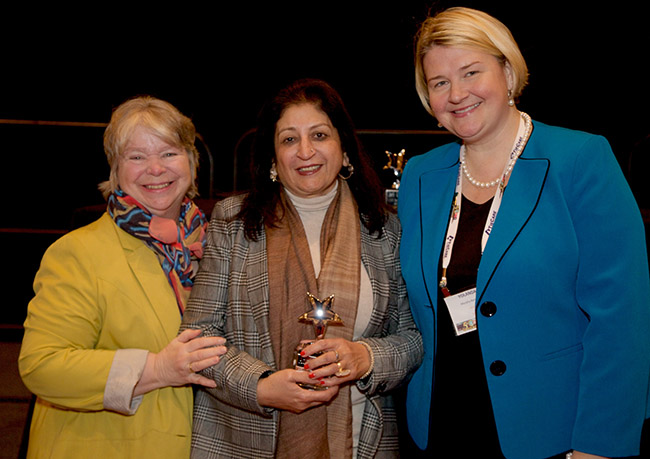 Atlanta, GA: Anu Monga, Head, Bangalore International School was inducted into the The Association for the Advancement of International Education (AAIE) Hall of Fame on the occasion of its 50th Anniversary in Atlanta in February this year.

The AAIE was set up in 1966 to promote a vibrant global community of leaders and learning. Over the years, the association has supported professional development and personal growth through its networking and emphasis on leadership in International Schools.

Speaking to NRI Pulse, Anu Monga revealed that she was elated about receiving the award. “I was really happy to be nominated by everyone in the elected head council.” Monga elaborated further, “As a head of The Association of International Schools in India (TAISI), I try to promote international education in India. I believe that we have to be rooted in our culture and respect other cultures”.

The award is a vindication of Monga’s efforts to promote not only international education but also to approach it from an inclusive and wholistic perspective.

While Monga has not taught in the United States, she has been offered several leadership positions in institutions from around the world. However, she says of her current role as the Principal of BIS, “I am very happy because it is fulfilling here. We try to help Indian students to fit into an international community.”

Besides conducting leadership workshops for students, Monga herself has attended a summer leadership program at Harvard. She was also the first Indian to be offered a place in the program at the Klingenstein Centre Teachers College Columbia University.

Where Do I Belong?