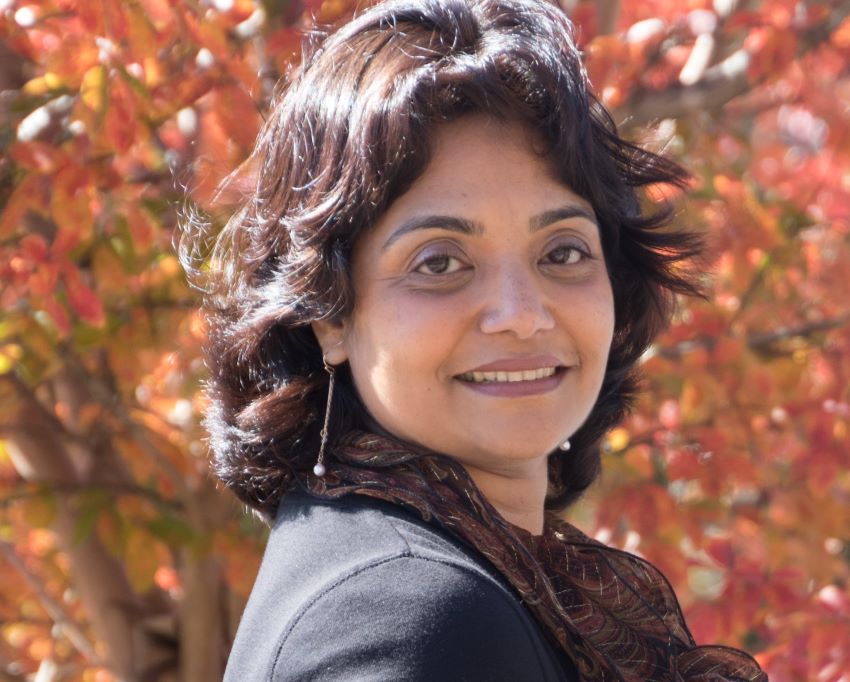 The debut in the Winds of Fire series, Duty and Desire, penned by Atlanta’s fiction author and freelance journalist Anju Gattani, explores the conflicts of an affluent female protagonist forced into an arranged marriage of convenience. She must battle her own misgivings to find her bearings–to refine and define herself even as she feels bound by duty and fueled by desire.

Embellished with intricate details of sprawling mansions, speeding Lamborghinis, sparkling diamonds, and splendid designer collections, Duty and Desire is a resplendent deviation from the stereotypical portrayals of Indian lifestyle. As she mentioned is her interview with NRI Pulse, Gattani has extensively researched the brands and behavior of the rich and famous, and weaves it well into her narrative.

The tale is set in the fictitious city of Raigun where preparations for a big fat Indian wedding are rife, in anticipation of the glamorous merger of two of the cities’ most affluent families and their fortunes. Gattani’s leading lady, Sheetal Prasad, blessed with youth, beauty, wealth and education is forced to give up the love of her life, Aravind, and marry the handsome playboy millionaire Rakesh Dhanraj. As lies and deception underneath the comfortable white Fultons of Dhanraj Mansion are unearthed, Sheetal struggles with her sanity. With her family honor at stake, Sheetal gives it all to fulfill her duties as a daughter and daughter-in-law. But as a mother, she is forced to question where her loyalties lie and must make decisions that are in the best interest of her son.

The author’s strong hold on elaborating intricate details of an elite setting, be it clothes, jewelry or the deco helps the reader connect well with the happenings. The intrigue of the arranged marriage adds an additional dimension, especially for those unfamiliar with the territory. Romance and lust are focal points, but secrets, greed and mystery thrown in for good measure makes for an interesting build-up.

Gattani’s male lead, as seem most of the other characters at the Dhanraj mansion, is complex. Rakesh is a man of many layers – romantic, demanding, reclusive, and abusive, even. We see shades of his softer side as a father and brother and husband. But often, this side is clouded by his sense of arrogance and pride.

Finding herself painfully attracted to her handsome husband, despite the fact that he raped her on their wedding night, Sheetal tries to fight various inner battles including the loss of lost love. Even as she fights her burning desire to be with Rakesh, Sheetal battles to find a space she can call her own, and position herself in the family. Rakesh’s mother and sisters, burdened and buried in their past, only add to her agony. Gattani empowers Sheetal to find her own voice even as she battles her inherent fear of failure at holding her family together.

The element of abuse infused in the storyline serves as the pivotal turning point to the character metamorphosis of Sheetal. Gattani says she looked into this material and found that a toxic behavior pattern exists between abusers and victims. While physical abuse is evident, the emotional abuse silently chips away at the soul and core of person. Based on this research, Gattani builds her Sheetal into recognizing the abuse and in turn gathering strength to fight back, with the additional responsibility of making the right choices for her child.

For the romantic at heart, with a penchant for the lifestyle of the economically higher strata of Indian society, there is plenty to indulge. Packaged with a glowing bride flaunting her studded saree and shimmering gemstones, Duty and Desire, makes for desirable read, indeed.

Sheetal, the lead appears to sway towards duty at the price of desire. As a woman and author do you think both are mutually exclusive?
In Duty and Desire, whether it’s the person Sheetal wants to marry vs. the man she’s destined to marry, the family Indu Prasad must tether vs. her wish to listen to her daughter’s demands or the Dhanraj status and prestige Rakesh must uphold vs. an innate calling to live carefree and careless—every character struggles with the demands of two worlds if not more.

The same conflict exists for so many of us in real life. Take a simple example– How many times have you woken up determined that you’re going to accomplish something you’ve been longing to do (desire)? As the day progresses the floodgates of life open and you’re dragged into a multitude of tasks / to-dos (duty) from car repairs, water leaks, sudden illness, broken roof that were not part of ‘the plan’?

Let’s kick that up a notch. Now what if you’re a high school grad and just made it into the top 5 colleges of your choice? An ivy-league school will drag on your parents’ pockets for years to come but offers the big banner and all the bells and whistles of an elite education (desire). A local school on the other hand offers in-state status, funding, scholarships and possibly more with minimum expense (duty). Now think of the stay-at-home mom and talented dancer who gave up her career (desire) to raise her family (duty), or an athletic doctor who saves patients’ lives every day (duty) but really wanted to be an athlete and had the capability (desire) but couldn’t make ends meet with the stipend or earnings from an athletic career?

Then there are stories where the characters have upheld desire over duty and accomplished success… movies like ‘Bhaag Milkaa Bhaag’, ‘M.S. Dhoni’, ‘Dangal’, ‘Avatar’ and ‘Shrek’.

These are stories of patience, persistence and perseverance against all odds and need to conform to follow the heart instead.

The trick is finding a balance somewhere on the spectrum between the two dichotomies. Coming to terms with what you’re given, how much is on your plate and acceptance are key. Who knows. Over time a duty may turn into desire? Then there’s no worry about mutual exclusivity because you’re dutifully following your heart’s desires.

Rakesh abuses Sheetal in this relationship. Even as Sheetal bears the brunt, she reluctantly stays put, but on her own terms. As an author dealing with the story and the aspect of abuse, how do you think you balanced for Sheetal to walk away from an abusive relationship versus staying on her own terms?

A lot of research went into Duty and Desire (and the Winds of Fire series). What I’ve learned is that there’s a toxic behavior pattern that exists between abusers and victims. With physical abuse, the wounds are evident and the victim knows he’s been hurt. Emotional / verbal abuse is invisible and the victim doesn’t even know or recognize he’s being hurt. No external wounds, no injuries and therefore no evidence. Emotional and verbal abuse silently chip away at your soul and the core of who you are.

I balanced Sheetal’s choice with the growth in her character. Her ability to see and recognize that she’s been verbally and emotionally abused and take a stand for what she’s endured gives her courage to fight back. The responsibilities of a child who is now dependent on her decisions give Sheetal the courage to stake their turf and his future inheritance in a dysfunctional household.

What is Sheetal’s choice dictated by? What drives her to her final decision? Is it her fear of poverty?

Poverty is less of an issue because once Sheetal speaks her mind and she’s armed with evidence; she secures footing on both turfs. Sheetal’s final choice is dictated by the welfare and wellbeing of her son and a chance to secure his future. Her son and her own personal honor vs. the family honor are at stake. If Sheetal doesn’t take a stand now then it’s clear no one else is going to either because every other character is driven by their own agenda. Sheetal learns that you have to help yourself, which is true for all of us. We have to fight our own battles. Some battles we get to pick and choose. Others are thrust up on us.

What was the most challenging part of writing this novel?

The amount and level of story and character details, keeping track of the Dhanraj and Prasad mansions’ layouts and the city of Raigun that I created from scratch—and doesn’t exist in the real world by the way—are just a few of the initial challenges. As the story progressed, the characters took on a life of their own and sprawled one story into a series of books. The next challenge lay in navigating the characters’ strengths, weaknesses, goals and agendas and keeping a track of countless story threads that morphed the journey of writing this novel into an adventure.

There seems to be a lot of research involving designer clothing, furniture, and Pilates. Can you talk to us about the research for the novel?

I worked with Mumbai’s elite fashion designers, Anita Dongre, who designed Sheetal’s couture and Arjun Khanna, who designed Rakesh’s couture. Not only did these fashion gurus dress my celebrity characters, they helped me understand the brands and mannerisms of India’s rich and famous. I worked with Ms. Abbey Brewer, an Atlanta-based yoga and Pilates instructor who introduced me to Pilates and its inner mental and emotional benefits. Then of course, my younger sister, Dr. Shruti Daga, (U.K.) for all medical issues in the story. Not only did Dr. Daga help verify illnesses and symptoms, she helped me narrow on the right ones for respective characters. I am grateful to each and every one of them and their stellar expertise.

The furniture and layout of the mansions involved a phenomenal amount of research as I ventured to find what would fit in these colossal homes. It was fun playing interior designer for a while but working on such enormous scales can be daunting because the furniture and décor held their own place and meaning in the story.

This is the first of the Wind and Fire series. When can we expect the next book in the series?

The next book in the Winds of Fire series, Lethal Secrets, should be out in fall or winter of 2020.

Lethal Secrets: Sheetal Dhanraj gave up her first and only love when she married the multimillionaire playboy her parents chose for her. Now a trophy wife, entrepreneur and mother to eight-year-old Yash, she’s the envy of every woman in Raigun, India. But their mansion’s gilded walls conceal lies and secrets that threaten the lives of Sheetal and her son.

When escalating threats force her to choose between the laws of culture she lives by and the son she lives for, Sheetal must destroy Yash’s future in order to escape before greed, infidelity and deceit destroy their only chance at freedom.

Author Bio: A fiction author, freelance journalist, fiction writing instructor, blogger and former newspaper reporter, Anju Gattani was born in India but grew up in Hong Kong. She has also lived and been published in Singapore, India, Australia, New Jersey, Connecticut, and finally dug her roots in Atlanta, Georgia, USA, with her husband, 2 dashing boys and a rebel lion-head rabbit. Gattani has been published in cover stories, fiction, feature, news, interviews, travel, perspective pieces and more.