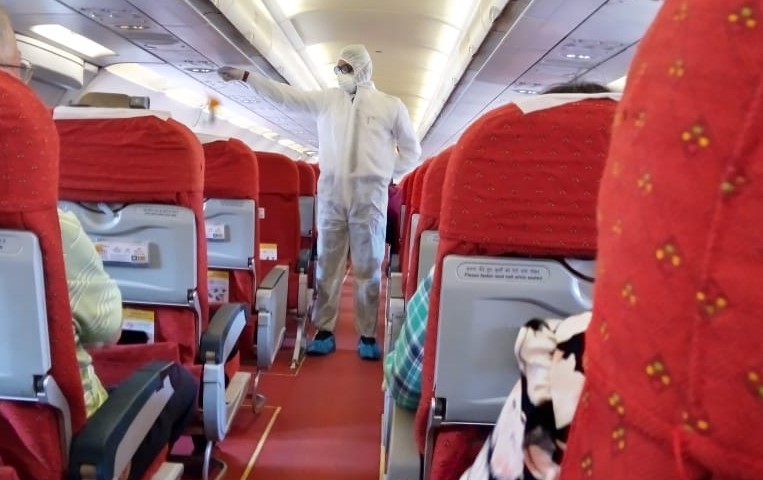 Atlanta, GA, April 21, 2020: The US government, in conjunction with the government of India, recently repatriated US citizens and green card holders who were stranded in India because of the coronavirus clampdown.

Among those who returned to the US was Atlanta’s Hanumantha Rao Digumarthi, who provided a first-person narrative to NRI Pulse about his experience.

My wife and I reached India on March 5, for a two-month-long stay, to visit family and friends, and see some places.

Before leaving, we had discussed our travel plans with our nephew, an MD and infectious diseases specialist in the USA, and a public health specialist living in India.

We got different opinions. Our MD nephew told us this was not the time for nonessential international travel. The friend in India said, we didn’t need to worry as long as we followed precautions and common sense.

I guess we wanted to make the trip, so we went ahead with our plans.

Around the time we left Atlanta, a few cases were showing up in the USA, and one or two cases were reported in India. China was still the COVID-19 hot spot.

Back then, in the US, people were stocking up on toilet paper, had sanitizers etc. In India, there was not a whole lot of conversation about the topic except to make fun of the fact that people living in America are hoarding up on toilet paper. I remember having a good laugh at the Atlanta airport, when our son who dropped us off, showed us pictures of empty aisles in grocery stores and even wholesale places like Costco.

On arrival at Mumbai airport, at the immigration, we had to fill in a questionnaire–– voluntary declaration about where we came from, any countries visited prior to arrival to India, any health issues and where we would be staying in India.

On March 13, we attended a 50th wedding anniversary get-together where we had a gathering of about 100 family and friends who had travelled from different places in India like Hyderabad, Bangalore, Berhampur etc. There were three of us from the USA and several local guests. Most of the guests were senior citizens, a few well into their late eighties and a couple in their nineties.

On March 19, Prime Minister Narendra Modi cautioned people about the epidemic on national TV, and asked for a 14-hour voluntary public curfew on March 22, from 7 am to 9 pm. At 5 pm on the same day, he urged people to show their appreciation to essential personnel for five minutes.

Across the world, things were more confusing, with the President of USA insisting everything is fine. The reality on the ground did not match the picture presented.

On March 24, in his second televised national address, PM Modi announced a 21-day lockdown of the country, starting at midnight, with a barely three-and-a-half-hour notice, which brought the country to a screeching halt. This got everyone’s attention, especially ours, because it hit us personally.

All international flights were suspended, and we were stranded in India for the foreseeable future.

People were allowed to go out from 6 am to 1pm to procure essential items, groceries, medicines etc.

We were staying with my sister and brother in law, so we were okay, but getting a little uneasy. We were worried about how long we would be stranded in India, while our children in the USA were almost panicking about our health and the uncertainty of our return.

Then, our sons Hemanth and Kiran informed us that the US government was negotiating with the Indian government to repatriate US citizens & green card holders stranded in India.

On March 22, I registered with Smart Traveler Enrollment Program (STEP) program, and on their advice, registered with travel.state.gov. On March 27, we filled an application, expressing our interest to go back to the USA, as per their terms of repatriation.

Every day ended with updates on how and when we would be able to make the trip back to the USA. We tried to get some exercise as advised, like walking on the terrace. On April 4, Hemanth informed us that we would have to execute a $2000 bond to travel on the US program.

On April 5, we received more information about likely flights. The two options were: flights on April 7 and & 10 leaving from Mumbai to Atlanta.

We filled the bond and opted to take the April 10 flight. The travel from Vizag to Hyderabad by road had to be arranged by us. However, the Hyderabad to Mumbai, and Mumbai to USA flights were arranged by the US government.

The day we were scheduled to travel, I was fortunate enough to speak to someone at the US consulate in Hyderabad, through the New Delhi switchboard. They assured us that we would get papers from the Consulate General, allowing us to travel from Visakhapatnam to Hyderabad by road.

On April 6, evening we received a letter from the Embassy, and other travel documents, with instructions to report at Park Hyatt at Banjara Hills hotel, Hyderabad, by April 10 morning, with limited luggage and no pets. We were also told to make our room reservations at that hotel.

On April 6, when we tried to book a taxi to go to Hyderabad with the papers sent by the Consulate, the taxi owner said we need an official travel permit signed and stamped by a local official to travel through police check posts and also for the driver to return back to Vizag.

By this time, I had spent about 5 and a 1/2 hours in humid weather, with a mask on and trying to maintain the advised social distancing.

We could not leave early the next day as planned, because we did not have our travel permit.

The next morning, I was at the collector’s office by 10 am. The Section D in charge came at 10.30 am, and told me that he had prepared the letter the previous night, and sent it to the collector for his signature. Again, the PA said he would send the letter to the collectorate in half an hour and asked me to wait there.

By about 2 pm the letter came, without the collector’s signature, and I was told that one of the assistant collectors would sign the permit. I realized any chance of leaving on April 7 was dwindling as the drive to Hyderabad is about 12 hours.

On my insistence, the Section D in charge, and office manager went to meet Ms. M. Sreedevi, District Revenue and additional magistrate. I tried to go into her room, but her PA and messenger physically held me back. By about 3.15 pm they came out of her room. I followed them to their office and was told that she refused to sign, as she does not have the directive from the Government.

By the time I ran back to her office to plead the case, she had left for the day. I was so confused, outraged, and did not know what to do, but to wait for the collector to come to the office.

We had to absolutely leave the next day, April 9, as our flight was scheduled for April 10.

About that time, I got a phone call from Mr. Venkat, US Consulate, Hyderabad, enquiring about my travel plan to Hyderabad. I

informed him about my situation at the collector’s office. He assured me that they would take up the matter with Chief of Police, Telangana and Andhra Pradesh, and I should get a message before 7.00 pm.

I contacted the Superintendent of Police, who asked me to meet the Commissioner of Police. I prepared a request letter and went to the

Commissioner of Police’s office.  It was 4.00pm, and he had left for lunch and his office-in-charge said he would be back by 6.00 pm. We waited there, with no option left. Close to 6.00 pm, the commissioner’s office assistant came with a list, showed us our names, and said he would give us the travel permit.

Finally, at about 7.00 pm, we got the travel permit. We left at 4.30 am the next morning. The drive to Hyderabad was a unique experience. There were no toll booths. The national highway was practically free of traffic. We were stopped at a few police check posts, but we had no trouble since we had the permit from the commissioner of police.

At the Telangana checkpoint, they checked our temperature and made us clean our hands with sanitizer.

We drove about 400 miles in 9.30 hours and reached Park Hyatt in Banjara Hills by 3.30 pm. At Park Hyatt too, they checked our temperature and made us clean ours with hand sanitizer, before we entered the hotel.

The next morning, we attended the Consulate meeting at the hotel.

They checked our temperature, and made us put on a wrist band. Our documents were verified. We were asked to meet at the lobby by 11.30, before taking our bus to the airport, to take the Air India flight to Mumbai. The hotel staff and airline staff were courteous and helpful.

The US Consul General Joel Reifman and his team deserve a special thank you and recognition for the professional, but caring way they handled our repatriation. CG Reifman even came to the airport to wish us a safe journey.

At Hyderabad airport, they took our temperature before going in. At the waiting lounge as well as on the flight, alternate seats were marked off to maintain social distancing.

At Mumbai airport, they moved us from domestic to international airport by bus. Before entering the airport, they checked our temperature, which was noted on paper, and the paper was stamped by the medial department, which had to be submitted at immigration.

We had to fill some more forms with the current address during our stay in India, our permanent residence in USA, and our telephone numbers.

The Delta flight from Mumbai to Atlanta, was nonstop–– 16 hours and 49 minutes. All 290 seats were taken. Finally, we reached Atlanta at 6.00 am on April 11, safe and sound. We lucked out in two ways. The earlier flight on April 7 got rerouted to Detroit due to bad weather in Atlanta. Secondly, we were served decent vegetarian food and plenty of snacks in between.

Finally, we were back at home to the relief of all our family members. Our children had stocked up on groceries and dairy.

Now we are in mandated quarantine for 14 days. After all the excitement and stress of the travel, we can certainly appreciate the down time.

If Corona Virus does not kill you, bureaucracy will kill you.