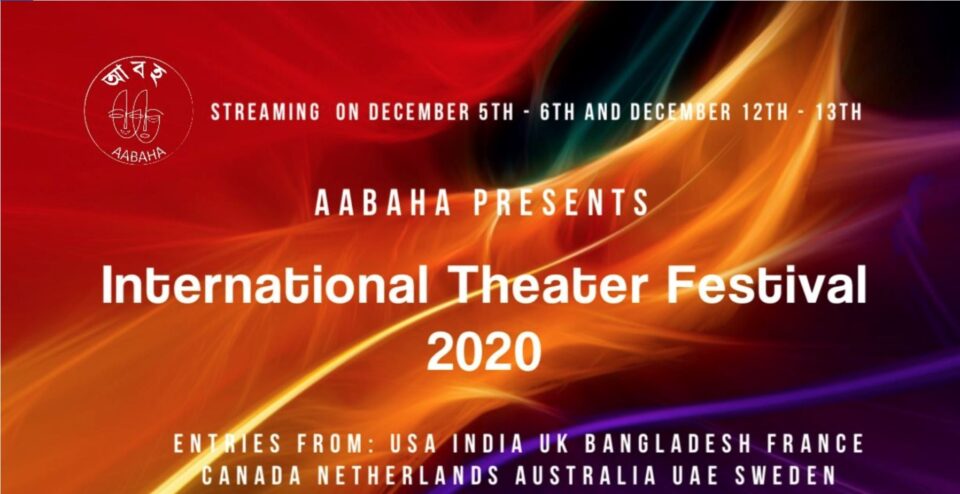 Atlanta, GA, October 29, 2020: As the world reels with uncertainty spooled by an unprecedented pandemic, people and even companies are engaging with digital technology in increasingly inventive ways, putting it at the very core of what they do for work or pursue passionately as hobbies. Atlanta’s Aabaha, a theater enthusiast group decided to push boundaries of artists and the audience with an International Theater Festival slated for December 5,6,12, and 13 December 2020. The festival will feature performances from twenty-five groups across four continents and ten countries, in predominantly Bengali, few English, and a couple in a mix of English and Hindi languages.

“Not bound by the traditional methods and structure, we bring emotion and narratives in alternative ways with a hope to reach audiences far and wide,” says Kallol Nandi, founder of Aabaha. Opening up a new dimension for the creative minds in this enhanced world, Aabaha is experimenting with both form and content of plays, encouraging innovative efforts while holding true to social accountability and artistic integrity, says Nandi.

The attempt for the initiative, Nandi says, is to explore various possibilities and collectively collaborate on discovery about a new format of theater. The International Theater Festival 2020 aims to connect theater enthusiasts around the world, to accept the changes that are obvious in the near future, experiment with the new form of digital theater, and reach out to the global audience using technology.

“In this COVID situation, proscenium theatres will not be possible in 2020 and 2021, 2022 is the best-case scenario. Additionally, everything is moving into the computer, PDA, phone etc. irrespective of the pandemic situation. So, with the combination of the push due to COVID and the pull of going on the net, we came up with this idea of doing the theater festival online,” said Nandi.

So, what lies at the core of creating a digital space for theater? “This form of acting is acting in front of the camera and not in front of the audience,” explains Nandi, adding that it is not to be confused with acting for movies. This form demands some modifications in its setup, lights, makeup, and dialogue delivery. The actors continue to act as if they were on stage, only the audience is replaced by cameras.

Nandi assures that the viewers will watch “theater” and not a movie.

The attempt to maintain purity of theater, Nandi says comes with technical challenges. “Directorially it is a challenge to not fall for doing a film and hold the purity of the theatre form. At the same time, we must take advantage of doing it in front of the camera, so that the disadvantages get compensated by the advantages. Ultimately it will be a newer/another form of theatres.”

Just as the entertainment industry as a whole is reevaluating the viability of traditional methods of entertainment and media, so is the theater. Traditionally meant for live performances with instant gratification of audience responses, performing arts suffers when neither the auditorium nor the audience is available. It is then necessary for the art to adopt. As Nandi notes, proscenium theater has and will have its own place and its own glory. It is also true that other forms of theater such as open-air theater, third theater, street theater, that broke out from proscenium theaters exist and have gained wide acceptance. The online presentation of theater, a contraction to the traditional, still in its nascent stage, is now emerging.  “It is yet to go through many iterations before taking a final shape. At Aabaha, in addition to live shows, we have embarked on a journey to experiment with this new form of theater,” stated Nandi.

Members of Aabaha have produced two short plays in the digital format. You can find more information on https://facebook.com/AabahaDramaGroup/ or http://www.aabaha.org/

As performing arts explores its avenues in the digital arena, only the audience can decide how far the attempts of artists and theater enthusiasts succeeded in maintaining the purity of the art form. Check out the International Theater Festival and decide for yourself.

Pop star Ananya Birla has alleged that a celebrity chef’s restaurant in California was “very racist” in throwing her and her family out, but the eatery has denied it saying that while there was a tense situation over IDs it was resolved and they were not made to leave. “This restaurant @ScopaRestaurant literally threw my family and I, out of their premises. So racist. So sad. You really need to treat your customers right. Very racist. This is not okay,” she tweeted on Saturday. The tweet received 617 likes by midnight Sunday. But Pablo Moix, a partner in the restaurant, denied that they were thrown out of the restaurant and said that they had stayed on to finish their meal. He told IANS that the situation arose when they were asked for their original IDs as required under state law to serve alcohol, which two people in the party had and the others only had copies of them. The situation escalated and then “de-escalated” and “they stayed and finished their meal, complimented both the waiter they had and the quality of the food”, Moix said. “I understand that everyone is on edge” these days, he said, adding: “It was an unfortunate situation.” Moix said that he wants them to visit the restaurant again. In another tweet, the singer-songwriter, who is the daughter of Indian billionaire industrialist Kumar Mangalam Birla, asserted that “we waited for three hours to eat at your restaurant”. Addressing celebrity chef Antonia Lofaso in the tweet, Ananya Birla said that one of her waiters, whom she named, “was extremely rude to my mother, bordering racist. This isn’t okay”. Full report on our website. Link in bio. #ananyabirla #scoparestaurant #racism

US proposes giving H1-B to those with top salary offers, scrapping lottery

Over 10,000 Converge in Atlanta for NATA Biennial Convention