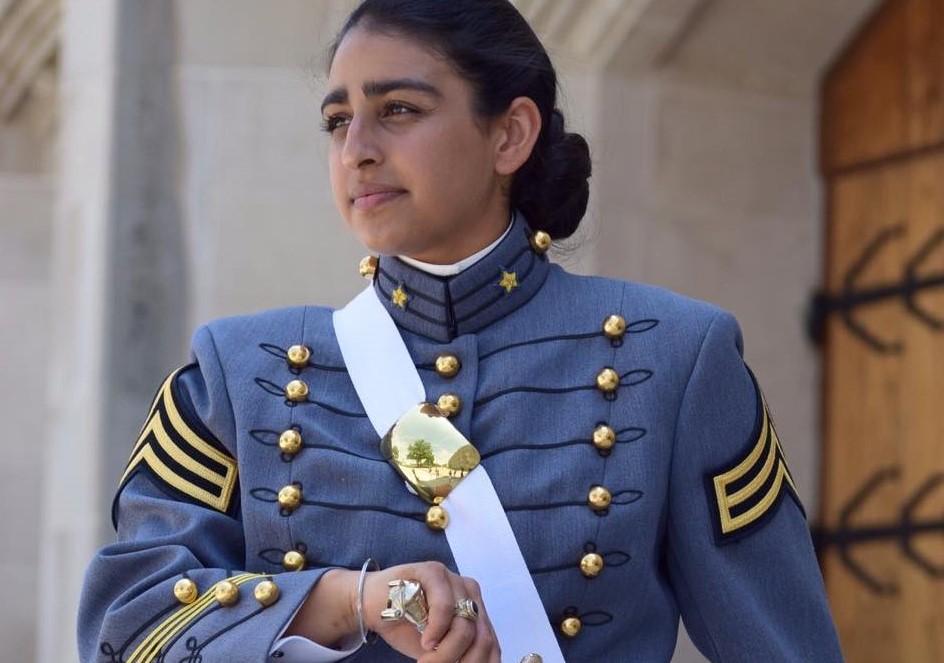 Narang was among about 1,100 cadets who graduated on Saturday at the premier institution’s campus in West Point in New York with the rank of 2nd lieutenant.

Although Sikh men have graduated from West Point, the Sikh Coalition described her in a press release as “the first observant Sikh” to graduate from the institution.

This was because she was not required to compromise her faith as past Sikh graduates had been required to under the regulations since discarded.

She did not have to cut her hair as women are exempt from the personal grooming regulations which forced her Sikh predecessors to violate the religious rules against cutting their hair and beard.

Second Lt. Anmol Narang was born and raised in Roswell, Georgia. She did a year of undergraduate study at the Georgia Institute of Technology before transferring to West Point, where she will graduate Saturday with a degree in nuclear engineering.

“I am excited and honored to be fulfilling my dream of graduating from West Point,” Narang said in a news release from the Sikh Coalition. “The confidence and support of my community back home in Georgia has been deeply meaningful to me, and I am humbled that in reaching this goal, I am showing other Sikh Americans that any career path is possible for anyone willing to rise to the challenge.”

“While 2nd Lt Narang required no accommodation for her articles of faith, her exemplary service to date underscores how diversity and pluralism remain core strengths of the US military and the country as a whole,” the coalition said.

Sikh men have now received an exemption and there are currently at least two men studying at the academy who are allowed to keep their beard and hair uncut under new regulations.

US Army Captain Simratpal Singh, a 2010 West Point graduate who had been required to cut his hair under the regulations at that time, said: “I am immensely proud of 2nd Lt Narang for seeing her goal through and, in doing so, breaking a barrier for any Sikh American who wishes to serve.

“The broader acceptance of Sikh service members among all of the service branches, as well as in top tier leadership spaces like West Point, will continue to benefit not just the rights of religious minority individuals, but the strength and diversity of the US Military.”

Singh won a court case challenging the Army ban on Sikhs keeping their hair and beard uncut leading to the change in rules.

Currently only the Army and the Air Force have given across the board exemptions to Sikhs, while other services have not.

Several women of Indian descent have graduated from West Point, with at least one passing in the past three years and becoming Army officers.

Smran Patil, who was born in Bengaluru, graduated last year, Neha Valluri in 2018 and Sneha Singh in 2017.

The academy began admitting women in 1976.

Narang’s maternal grandfather’s career in the Indian Army gave her an interest in military service and she began her application process for West Point after her family visited Pearl Harbor National Memorial in Hawaii, the coalition said.

Admissions to the military academy are extremely tough. Besides fulfilling educational and physical requirements, a candidate will have to be nominated by a member of Congress, the vice president or the president to be admitted to West Point.

Delivering his commencement address — the formal speech at the graduation ceremony — Trump reiterated his vision for the US military that moves away from involvement in internal issues of other countries to prioritising Washington’s interests.

“We are ending the era of endless wars. In its place is a renewed, clear-eyed focus on defending America’s vital interests. It is not the duty of US troops to solve ancient conflicts in faraway lands that many people have never even heard of. We are not the policemen of the world.

“We are restoring the fundamental principles that the job of the American soldier is not to rebuild foreign nations, but defend – and defend strongly – our nation from foreign enemies,” he added.