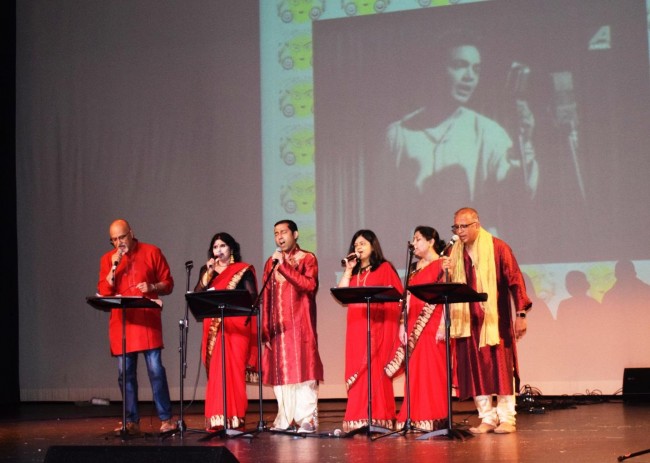 Atlanta, GA, November 2016: The Bengali Association of Greater Atlanta (BAGA) celebrated Durga Puja 2016 at the Mountain View High School, Lawrenceville Georgia from October 7 to October 9. This was a three-day event dedicated to Goddess Durga, and was filled with food, shopping, drama, music, and dance. 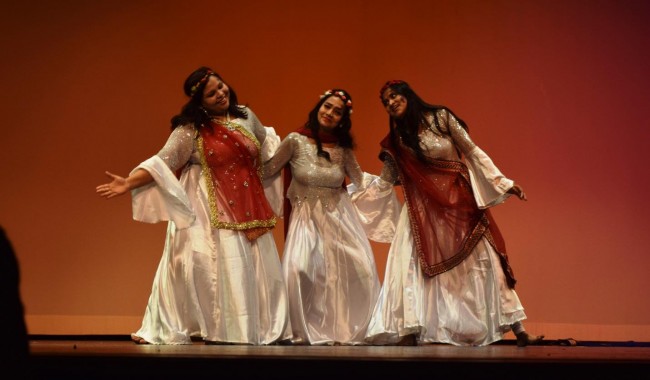 BAGA conducts the largest Durga Puja in the greater Atlanta and draws people from the neighboring states of Florida,South- Carolinas,North Carolina,Tennessee and Alabama.

Durga Puja is the biggest event for BAGA and members work round the year in its preparation. The Durga Puja is an annual Hindu festival inSouth Asiathat celebrates worship of the Hindu goddess Durga. The real historicity of the event or its real symbolism is lost over time. Now it epitomizes the victory of Good over Evil. This is especially significant for the Bengali Hindus who regard Durga as the destroyer of all evils and the protector of her devotees. For Hindu Bengalis, it is not only the biggest religious event, but also the biggest socio-cultural forum. As the Bengali diaspora spreads its wings across the globe, the Durga Puja has become a strong community builder and a social platform for Bengalis living abroad coming together.

BAGA tries to bring top artists from India each year to perform at the Puja event. This year was no exception. There was the band ‘Kaya’ which entertained the audiences with their folk based songs on Friday. Then there was the famous Bengali singer Lopamudra Mitra who enthralled audiences well past midnight on October 8. And finally, the biggest name, national prize winner for singing, Rupankar Bagchi captivated the audiences on Sunday with his soulful singing. 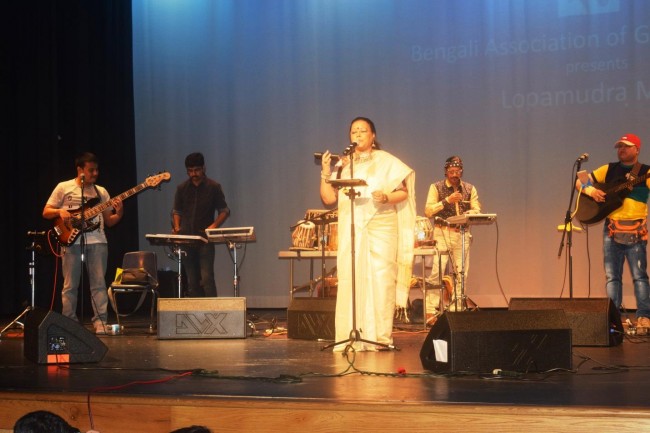 The cultural show is the biggest strength of BAGA which draws maximum crowd. The auditorium of Mountain View High School overflowed with listeners who did not mind standing or sitting on the floor and stairs to hear their favorite stars sing.

Then there were shows by local artists who put forward their best performances. First was the Debi Bandana under the musical direction of Apala Sen and dance choreography of Sridevi. BAGA’s young girls invoked Maa Durga through their semi-classical dance styles on Devi Vandana songs.

Then there was a humorous drama called Lakshaner Shaktishel based on the play by Sukumar Ray. BAGA’s boys entertained the audiences with their energetic performances. BAGA cultural team guided by Nita Bose presented ‘RED’ – an innovative fusion of contemporary dance styles. They portrayed the different emotions of the color red: sacrifice, danger, love, passion, anger, heat, sexuality, joy and courage. There were riveting performances by Sagnika Mukherjee, Dona Paul, Kalyani Ray, students of Deeksha School of performing Arts and many others. The last event was a period drama directed by Ria Rakhit. It was based on Bankim Chandra’s ‘Debi Chowdhurani’ inspired by true historical events. The novel inspired Bengali women to joinIndia’s freedom movement against the British rule.

Parimal Majumdar said that BAGA has gained more than 60 new members.  The members of the BAGA cultural committee Nita Bose, Papiya Dutta, Sonjukta Haldar, and Dimple Bose worked hard and deserve full credit. The Board of Directors – Dharmajyoti Bhaumik , Partha Banerjee, Sabitry paul, Ananda Rakhit congratulated the executive committee for an excellent job and promised a great show again next year. In the end everyone was happy. Friends and families hugged each other, and wished ‘Shuvo Bijoya’- the Bengali greeting for victory and good luck.