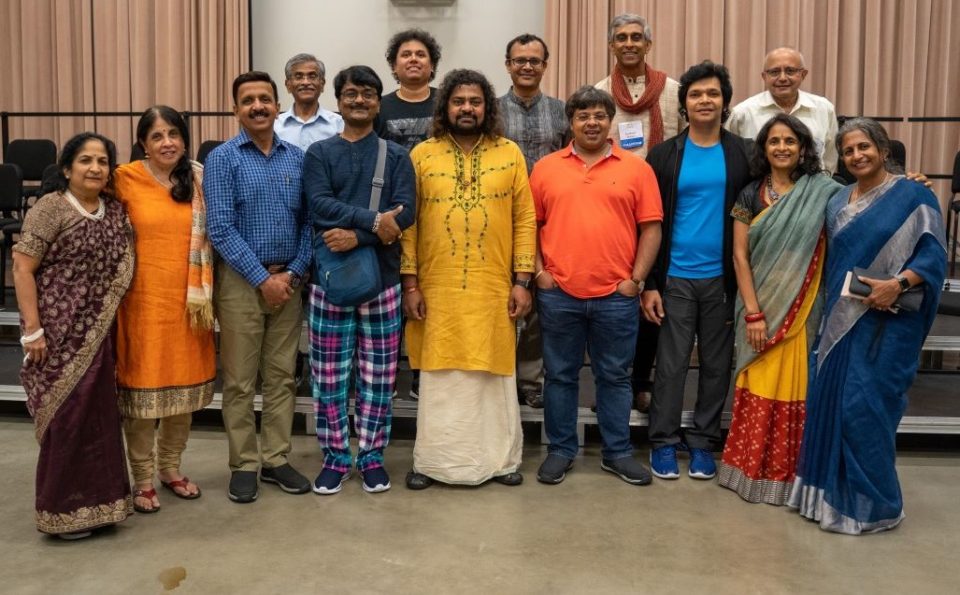 Atlanta, GA, October 10, 2019: Bho Shambo, a grand musical production by AIM (All India Movement) for Seva held at KSU Bailey Performance Center on September 22, 2019 raised $175 K for the cause, with 100K donation from a single Atlanta donor, who chose to remain anonymous. The production, featuring Carnatic and Hindustani Jugalbandi by exponents of their fields Rakesh Chaurasia, Shashank Subramanyam, Jayateerth Mevundi, Satyajit Talwalkar, Patri Satish Kumar, Narendra Nayak offered an immersive and transportive experience to the audience with divine musical vibrations that reverberated through the walls.

The opening welcome by Nithya Narasimhan was followed by a performance by Srivalli Sridhar and kids. Nithya Swamy and Shobha Swamy appealed to the audience to donate for the cause.

“We are so happy that the Atlanta chapter of AIM for Seva has raised donation to support 120 children. Our goal is to be able to support 200 kids. We are also trying to help adults with disabilities, with the AIM for Seva Krupa Care. We have raised $35,000 towards that and our goal is to reach $60,000,” said Eashwar Money, Atlanta coordinator for AIM for Seva.

The composition of Swami Dayananda Saraswati, Founder-Chairman of AIM for Seva, Bho Shambo, a thematic presentation of Lord Shiva, came alive as exponents in their fields played their instruments to their harmonious best, with Jayateerth Mevundi’s cultured and rich vocals conjuring the serene picture of Lord Shiva.

The Jugalbandi was a confluence of Carnatic and Hindustani disciplines. A sense of divinity prevailed as Subramanyam and Chaurasia’s mellifluous, nuanced rhythms on the flute played off each other. The conversation between the performers, as they termed the Jugalbandi in their interview, was an inspirational release of their artistry, with seamless, effortless flow between their individual styles. The conversation between Mridangam and Tabla players, Satyajit Talwalkar and Patri Satish Kumar began with slow rhythmic beats, picking up tempo gradually as the concert progressed, peaking to a compelling conclusion. Mevundi’s refined, soulful rendition accompanied by Narendra Nayak’s harmonium and percussions was fitting tribute to the composer and the cause.

Swami Bodhananda Saraswati, also present at the event, urged everyone to donate generously.

AIM For Seva was founded by Swami Dayananda Saraswati, in 2000 with a primary focus of providing education and healthcare access to children in rural areas through their Chatralayam model. Chatralayams are secure residential facilities that provide students with the opportunity to attend school without interruptions – free of cost. Students who stay in the Chatralayam, attend the nearby school, and receive tuition, books, uniforms, fortified food, yoga, sports and extracurricular activities.

The first Chatralayam was set up in 2001. Today, AIM for Seva has 104 Chatralayams across 16 states in India. Chatralayams are managed by coordinators. The staff includes a warden, cook, helper, along with security personnel and CCTV.

Krupa Care (formerly Krupa Home), founded in 2010 by Swami Dayananda Saraswati. is a residential facility that caters to differently abled men with developmental disabilities such as autism and cerebral palsy. The facility offers dedicated lifetime care and support with qualified caretakers help to assist and enable the residents to strengthen their abilities, learn new skills. Today, Krupa Care has 38 male residents, between ages 18 and 65.

You may visit https://www.aimforsevausa.org/  for more information

On the sidelines of the tour, team of Bho Shambo, which is on 13-city US tour, spoke to NRI Pulse about the origins of the idea, what Jugalbandi means to them and all things musical.

“Percussions lend themselves to the theme of Shiva. About 4 years ago, AIM for Seva approached me and we wanted to present Swaiji’s composition. It was my idea to include a vocalist to render the piece towards the end of the program,” said Subramanyam.

This fantastic combination of artists has come together for the very first time and this has been possible only because of AIM for Seva,” said Chaurasia.

“Jugalbandi means two artists playing together. Lot of people think Jugalbandi is having two people on stage and have them go to war. It is the art of portraying Indian classical music in different styles, at their best. It is the understanding between the artists that comes before the music,” elaborated Chaurasia. Subramanyam and Chaurasia further explained, “Indian classical music has two parts, the north and south Indian parts. The percussion also has 2 styles, Tabla and the Mridangam. So, it is a coming together of two styles of music and two styles of percussions. We put together Carnatic music, Hindustani music and find the commonalities. It is a Conversation we have. For the audience it is listening to two styles. But for the artist, it is like conversation we build on stage. It is not about which is better or the best. It is about what we can portray best in each of the styles. We also pick the idea off of each other. It is a healthy conversation, not a competition.”

Is it possible for someone to learn Hindustani at a later stage if they were originally trained in Carnatic? “Nothing is impossible,” Subramanyam was quick to answer, being familiar in both styles. The experts agreed that each style poses its own set of challenges and requires its own sadhanam (practice). You can learn from each other’s compositions and blend it into yours, but it is important to remain homogenous throughout and sound Hindustani in parts and Carnatic in others. “It is like using different ingredients to prepare a good dish or a good cocktail. The cocktail is for us to prepare, but the output should be easy, relaxing, spiritual and a journey.”

Are all Juagalbandi performances the same, throughout the tour? Not exactly! It is different each time, but the essential framework and direction of Indian classical music always remains the same, said the experts.

Does the response of the audience matter?” Absolutely,” was the unanimous reply. Although it is important to know the audience, said Subramanyam, in Europe, for example there is pin drop silence throughout the performance and a thunderous applause for 5 minutes at the end. But Indian audience like to applaud in between.

And Atlanta applauded, in between, and in the end. They came. They performed. They conquered.