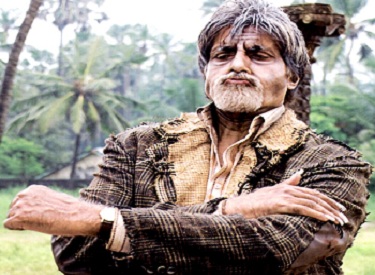 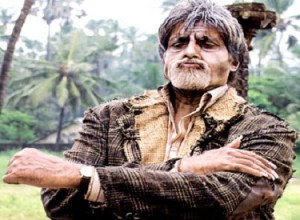 Straightaway, this film wins you over with its clean heart and straight-talking attitude to the rot that has set into our governmental system.

You want a change in the nation’s politics? Then change the politicians! It’s really as simple as that. Director Nitesh Tiwari who co-directed the endearing kiddies’ concoction “Chillar Party” finally unravels one of the greatest mysteries of poetic life. What did Wordsworth mean when he said, ‘Child is the father of man’?

Watch little Parth Bhalerao spar effortlessly with the formidable Mr Bachchan. And you see in front of your dazzled eyes the future of Indian cinema. Parth simply sails through his slum-kid’s role, creating for his character little pockets of perkiness and poignancy without ever playing aggressively for effect. He speaks his lines with the casual grace of a theatre veteran.

Epitome of gracious screen-sharing that he is, Mr Bachchan simply slows down to let his little co-star to take centrestage, bowing to the little actor’s consummate naturalness even when faced with very adult problems like corruption in politics, the redundancy of democracy and yes, the validity and imperativeness of the vote.

Firing a topical salvo this ballot drama is speckled with some disarming display of feisty homilies. The film builds on the premise of a benign ghost’s friendship with the slum-kid without allowing the narrative to become a flashy showcase for either of the two actors’ performing abilities.

The film has three heroes, the third being the strong sometime over-assertive political message: If you don’t vote for the right people you will end up with the wrong people in the legislature.

Boman Irani as the slimy politician enriches the political drama further by providing a tangy tangible flavour of decay and corruption in this amiably contoured morality tale.

Director Tiwari’s heart bleeds for the country’s electoral crisis. No matter who wins the elections, the public loses. This statement is put across with a fluid forcefulness allowing space for thoughtful verbose passages on why and how the corrupt rule the nation.

Towards the end-game the narrative gets heavy-handed with an excess amount of speeches and sermons. But the narrative’s conscience is never compromised for the sake of brevity or excitement.

The plot takes its time to build an enduring relationship between the homeless ghost and the slum-kid. The dialogues that bind the two unlikely friends, separated by a good 60 years, are crisply written. The spoken lines are frequently driven by a desperately urgent need to bring about a change in our governance.

While the Big B and his little wunder-kid of a co-star dominate the proceedings, they get ample support from a bevy of talented actors both known and unknowns who pop up as ghosts, scumbags, poverty-stricken people and other misfits.

The songs appear with ghoulish delight.You simply have to see Partho and his distinguished co-star match steps in the “Party Toh Banti Hai” song.

Cinematographer Kanwaljeet Niyogi shows a remarkable aversion to loud colours, instead capturing crowds of expectant voters in narrow spaces where they seem to exist in no fear of moral asphyxiation. We are a thick-skinned democracy. Still, those candid shots of the poor, hungry and the deprived in the song “Sahib nazar rakhna” would move even the most hardened cynic to tears.

“Bhootnath Returns” dissolves those walls of cynicism that we’ve built to protect our conscience from politics. It gives us a vivid if somewhat didactic view of a democracy that mocks the very multitude that believes in it. During this season of heavy electioneering a light heartfelt take on the vote bank is just what the doctor prescribed. Tiwari delivers a spirited statement on the quality of political life in apna bhaarat mahaan.

And yes, Amitabh Bachchan and Parth Bhalerao are the coolest pair of dudes since Jai and Veeru.