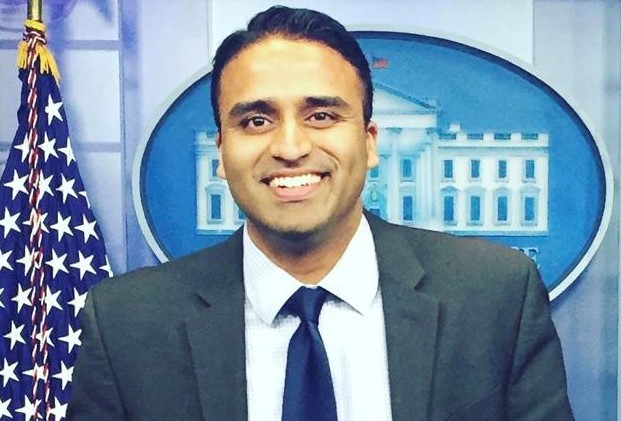 New York, Dec 1 (IANS) US President-elect Joe Biden and Vice President-elect Kamala Harris have appointed Indian-American Maju Varghese, who steered their campaign, to be the executive director of their inauguration – the swearing-in ceremony and the festivities around it.

The announcement on Monday makes Varghese the fifth Indian-American to be appointed to an important position by Biden and Harris.

Earlier on Monday, Biden had formally announced the appointment of Neera Tanden as the Director of the Office of Management and Budget.

Varghese played an important part in the successful Biden-Harris campaign as its chief operating officer and as a senior adviser to the former Vice President.

He ran the logistics for the nationwide, multi-million-dollar effort to elect Biden, mobilising tens of thousands of staff and volunteers.

He had worked for former President Barack Obama as his special assistant and deputy director of advance, a position in which he worked on organising his travel in the US and abroad.

One of those assignments was organizing Obama’s 2015 historic trip to India for the Republic Day celebrations.

Varghese later became assistant to the President for administration and management and oversaw the White House complex.

His parents immigrated from Thiruvalla, Kerala, to the US, where he was born, and is a lawyer by training.

The inauguration of Biden as President and Harris as Vice President is slated take place on January 20, 2021, as mandated by the constitution when they will formally take over the offices.

This will be the 59th inauguration and it will take place under the shadow of the Covid-19 pandemic and the festivities would have to balance the exuberant outpouring of joy by Biden supporters with the need to prevent the spread of the disease.

Tony Allen, who was named the CEO of the inauguration committee, said: “This year’s inauguration will look different amid the pandemic, but we will honour the American inaugural traditions and engage Americans across the country while keeping everybody healthy and safe.”

He is the president of Delaware State University in Biden’s home state and had been his speech-writer when he was a Senator.

More than a million have come to some previous inaugurations.

The social highlight of inaugurations has been the inaugural ball, a formal dance by the President and the Vice President and their spouses, and the invitees, with the women dressed glamorously in designer outfits that get widely discussed.

Several entertainments are also organized for the rest of the crowds attending the inaugurations.

Congress is officially in charge of the formal swearing-in portion of the inauguration and has the bi-partisan Joint Congressional Committee on Inaugural Ceremonies to hold the ceremony at the Capitol, the Congress complex.

But the winning presidential candidates set up their own committees to work with it and to organise other celebrations and raise funds for the events.

The other Indian-Americans named to important positions by Biden include former Surgeon General Vivek Murthy, who was appointed co-chair of his Covid-19 task force last month in one of his first acts after the media proclaimed him the winner of the presidential election.

Two Indian-Americans were named to head the committees in charge of transition to the new administration –- Arun Majumdar for the Department of Energy and Kiran Ahuja for the Office of Personnel Management.

In addition, 19 Indian-Americans were appointed to the various transition teams and two others, Atul Gawande and Celine Gounder, to the Covid-19 task force.