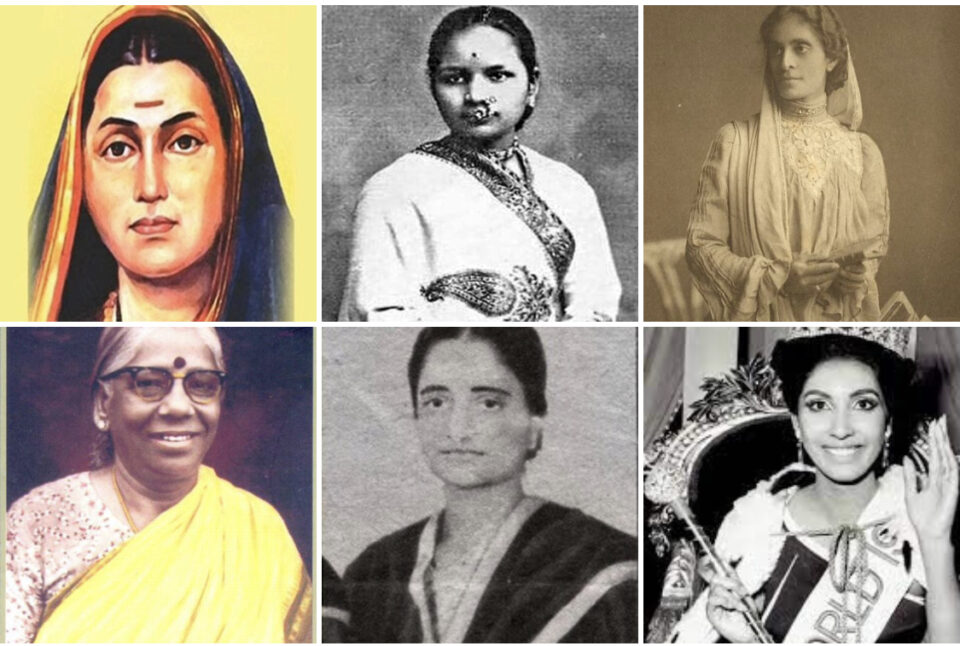 The first female teacher; the first female doctor; the first female engineer; the first in any field. There is a certain dynamic energy to first-time achievers who blaze the path for many others. Who were they and what was their story? In a patriarchal civilization, stereotypes are deep-rooted and continue to entangle many sections of society. Women ignited with a dream that has never been realized by any before them, must dip into their reserves of resilience to fight barriers and achieve their dream.

Nothing is impossible, every one of these achievers has proved “I-am-possible”, and “my dream is attainable”. How beautiful to reflect on how the hand that rocks the cradle can inspire and lead the world, breaking barriers and shattering glass ceilings.

Celebrating a few first women in their respective fields from the prior century who led the way with the light of their passion and perseverance:

Savitribhai Phule became the first female teacher of India. Education was initially a profession with only male teachers and headmasters. She encountered many odds including cow dung being thrown at her on her way to school. Together with her husband, they were instrumental in opening a girls’ school, and thereafter shelters for destitute women, widows and abandoned child brides. Savitribhai paved the way for women to break through the iron chains that restricted their dreams and was one of India’s first female social reformers.

Anandibai Gopalrao Joshi was inspired to become a doctor when at the age of 14, she gave birth to a baby boy who did not live past 10 days. She felt the need for women to have women physicians and applied to the Women’s Medical College of Pennsylvania. She faced opposition from the local community to pursue higher studies in the US, leaving her husband back in India. Her husband supported her dream and she boarded a ship to travel to the US at the age of 19, after receiving financial contributions from many others who believed in her. She was the first woman who travelled abroad for a higher education in western medicine and graduated with an MD in 1886. She returned to India, receiving a warm welcome including a message from the Queen, inspiring many women in the generations ahead.

Cornelia Sorabji was the first female graduate of Bombay University, the first woman who studied law in Oxford University, England, and thereafter India’s first female lawyer in 1894.  Due to gender discriminatory laws in India, she was not recognized as a barrister until 1923. She was a strong advocate for women’s rights including the upliftment of widows and women in purdah who faced many barriers in a patriarchal society.

Accounting and Auditing were professions with literally no women. R Sivabhogam a graduate from Queen Mary’s College, Chennai had a keen desire to learn the language of business and went on to create history by becoming India’s first female accountant in 1933 and subsequently a fellow of the ICAI in 1950. She performed audits of non-profit organizations on an honorary basis and created endowment scholarships for women to pursue higher education.

Ayyalasomayajula Lalitha is India’s first female engineer who graduated from the College of Engineering, Guindy in 1943 with a degree in electrical engineering. Lalitha was a widow who pursued her studies in an all-boys engineering college. Her graduation certificate was manually altered from a “he” to a “she” with the vice-chancellor himself completing the honor. Today many women pursue STEM careers, which in the 1940s was almost unthinkable.

Reita Faria Powel was the first Asian woman to win the Miss World pageant in 1966. She was also the first medical student winner who went on to become a successful doctor.  Unlike sponsorships that Miss India winners are bestowed with today, Faria went to London with a minimal make-up kit and borrowed clothes. She won the pageant for both her grace and her intellect in answering questions. She bowled the judges over with her answer that India needed more gynecologists, which was what sparked her desire to become a doctor.

Trailblazers from the past lead the way for more women in the future. The most recent pathbreaker of this century is none other than VP Kamala Harris.  She is the United States’ first female vice president, the first African American and first Asian American vice president. She was inspired by her mother Shyamala Gopalan, a breast cancer scientist from India who received her doctorate the same year Vice President Harris was born.

She fondly recalls what her mother told her about being a “first.” Harris explained, “I was raised by a mother who said that to me all the time: Kamala, well, you may be the first to do many things—make sure you’re not the last. “

Women pathbreakers continue to make history and are more in the spotlight compared to women from the prior century who were relatively less known.

Each story reflects a motivation to excel beyond the barriers of gender, marriage and socio-economic factors. Each story has a ripple effect of sending waves of inspiration to many others. If you can dream it, you can actualize it. It is not the end but a beginning for new pathbreakers to feel inspired and continue the journey of weaving new dreams into reality.

* Madhuri Bandla is a CPA, accounting educator, freelance writer, columnist, dreamer, lover of life and learning. While her roots are from India, which nourish her and keep her grounded, she considers herself a global citizen in the wilderness of the earth, drawing from different cultures and diverse experiences. Her longest love affair is one with words and she enjoys writing about Hindu mythology, socio-economic and women’s issues, nature-inspired poems, and travel memoirs.

A great tribute to great women who were
pioneer in their respective fields and showed the way to others. Very inspiring articles with authentic information. Kudos to Madhuri Bandla and NRIpulse.com