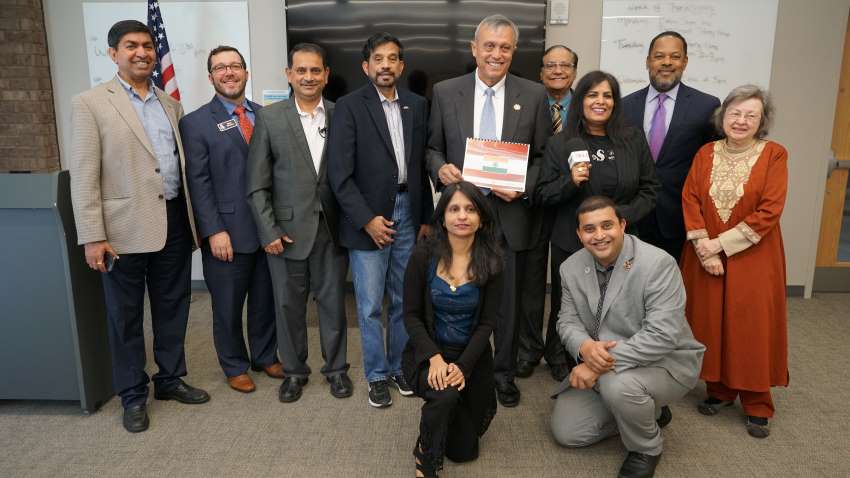 Atlanta, GA, December 2019: Cobb County is thriving, in more ways than one. With frequent announcements of business expansions and incentives making headlines, it was only a matter of time before the county showcased its rapid development to highlight what it has to offer to businesses and communities, including fostering bilateral relations with international companies. And it did, with staggering stats to substantiate, too.

“Due to the efforts of members of the chamber and the government we have grown our tax digest by 40% and that is an extraordinary number. It reflects the confidence the business community has in us. Now that they are here, it is important that they stay here,” opened Mike Boyce, Commission Chairman of Cobb County at a meeting with an Indian-American delegation held at the Sewell Mill Library and Cultural Center on November 20, 2019.  He was joined by two members from Cobb Chamber, Sharon Mason, President, CEO and Dana Johnson, EVP of Economic development and Executive Director of Select Cobb, Michael Hughes, Cobb Economic Development and Ross Cavitt, Communications.

Kartik H. Bhatt, consumer member for the Georgia Board of Examiners for the Certification of Water and Wastewater Treatment Plant Operators and Laboratory Analysts assembled the Indian delegation for the meeting.

“Our school system is perhaps one of our most valuable commodities. One of Cobb county schools figure in the top 5% of every best school rating in the country. We have 13 Libraries in the county,” noted Boyce, adding that he recognizes the importance of education to the Indian-American community. Boyce highlighted Technical colleges of the county that provide academic and technical pathways, that form the basis for a robust workforce.

“We have a strong diverse economy,” stated Johnson. From international corporations such as Lockheed Martin to recent corporate partner, Plethora, this year alone the county attracted 19 projects, 10 recruitments, and 9 retentions. “Over its lifetime, Select Cobb has helped out with 30K jobs, and 2.89 billion $ of new investment.”

With SunTrust park and 6 Flags under its belt, tourism is quite the contributing industry in Cobb. “2018 generated $3.14 billion, employing 40 thousand people in hospital and tourism space,” noted Johnson, emphasizing two big events being hosted at the SunTrust Park – the 2021 MLB All-Star Game, and theVisa Big Air on Dec 20-21, 2019. Visa Big Air is part of a multi-year commitment by U.S. Ski & Snowboard to bring big air events to the masses in breathtaking new environments by hosting one city big air event per season leading into the Olympic Winter Games Beijing 2022.

“A lot of what we do at the chamber is focused towards building international partnerships,” said Johnson, citing Cobb Chamber International Reception hosted by the county, attending the SEUS-CP Conference, an economic forum founded at the initiative of the Québec government and the state of Georgia, meeting Korean Consulate and other consulates as part of their outreach program. “We would love to create bilateral co operations from India.”

Johnson drew attention to Ignite HQ Incubator and The Farm Comcast Accelerator that brings both national and Atlanta-based startups to the heart of Atlanta’s thriving entrepreneurial ecosystem. ”If you have an idea, we have the means to formalize the idea, create a business and get the skills and tools you need grow. Our educational institutions, businesses and workforces are all working together so we can have a pipeline of talent to work together in all sectors including Biotech, Healthcare, Technology, Construction, and Trade.”

“We are very blessed in this county to have incredible leadership. We are so strong because we all work together, we collaborate. At the chamber we advocate the local and federal levels working with our many partners,” stated Mason.

Acknowledging issues with traffic, among others, Boyce said America has always been about problem-solving and will find a way to address its issues.

Addressing issues of burglaries, Indian homes in particular and the recent incident of a student walking into Wheeler High School with a gun raised by NRI Pulse, Boyce said appropriate measures had and will been taken.

“We do have one shortfall for the Indian community – the lack of a cricket stadium,” quipped Boyce. He cited an Indian American DQ franchise owner in Cobb whose kids went on to be neurosurgeon and biotech engineers. “This is not a one-off. This is the story of the Indian community in Cobb County.”

“The strength of America has always been its people. There must be a divine intervention to have people from 160 countries to come live here and we have found a way to be successful.”

“We want people to come to Cobb county because we are family. It is not just the quality of life but a representation of the American dream,” concluded Boyce.