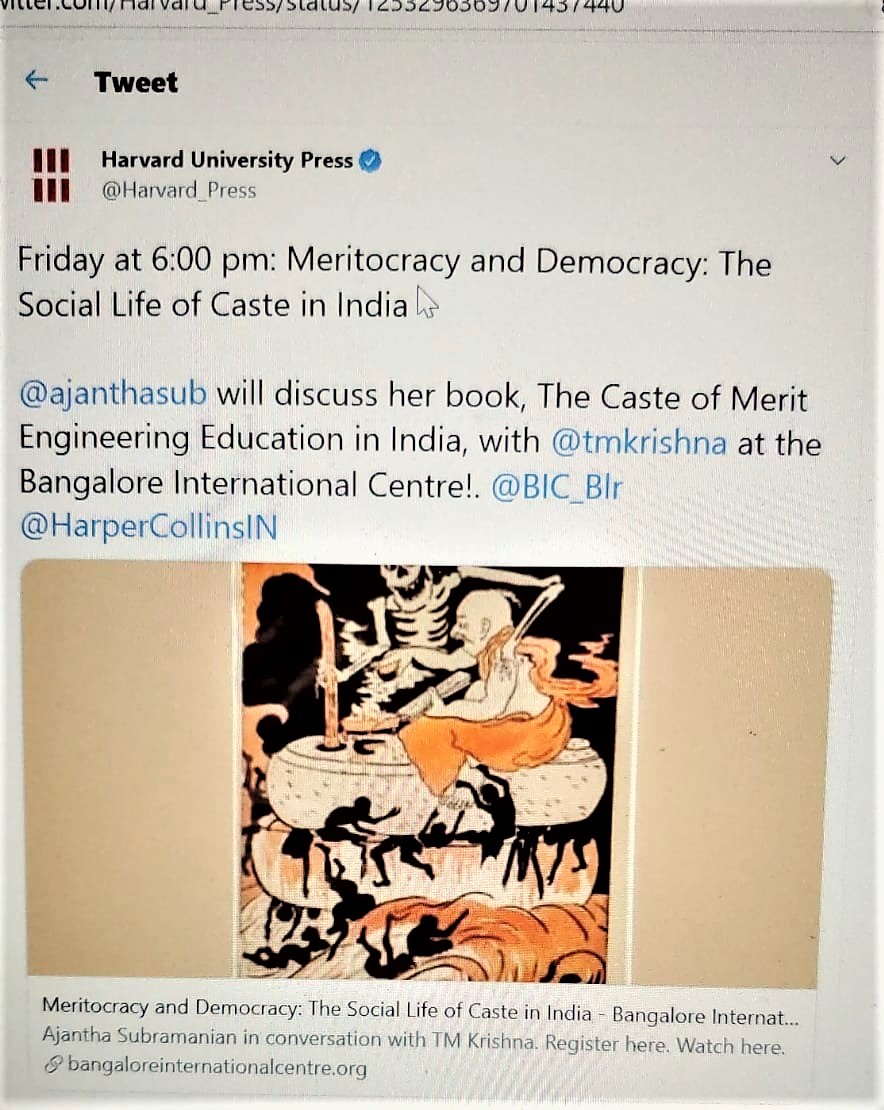 Atlanta, GA, May 1, 2020: The Coalition of Hindus of North America (CoHNA) wrote a letter to Harvard University expressing outrage regarding a deeply racist and highly evocative cartoon on Hinduism.

On April 23, 2020, the Harvard University Press (“HUP”) tweeted an announcement regarding Dr. Ajantha Subramanian’s upcoming virtual talk titled “Meritocracy and Democracy: The Social Life of Caste in India,” which also featured guest speaker TM Krishna. The talk and discussion were related to her book “The Caste of Merit: Engineering Education in India,” and were organized by the Bangalore International Centre.

In promoting the talk by Dr. Subramanian, HUP failed to review the contents of the link, which contained a gory cartoon depicting a Hindu religious figure holding holy books while adding ingredients to a traditional millstone and conjuring up a skeleton from the ingredients, crushing many black human figurines and killing them or throwing them into what seems to be waves of fire. One black figurine is also seen holding on to the feet of the religious figure in a desperate attempt to save itself.

Interestingly, the image is not from the book but was specifically selected for the tweet and the promotion of the event. The image, known as “Millstone of Caste System” is the 1917 work of cartoonist Gaganendranath Tagore.

Racist cartoons are reminiscent of the antisemitic caricatures about Jews in the late 19th and early 20th century, using bodily stereotypes and showing them as immoral, criminals, corrupt businessmen, usurpers, etc., says a press release issued by CoHNA. “Similarly, African Americans were depicted as animalistic, crazed and savage based on pseudo-scientific anthropological theories of the late 1800s. It is well known that such characterizations were used to openly justify oppression of the people and endorse a violent history of oppression of Jewish, African American, women, LGBTQ and other communities. Indigenous peoples were also depicted in cartoons in prejudicial ways in early 20th century to justify their conquest.”

While Tagore’s cartoon is different and comes from Indian culture itself, it is important to note that such a cartoon needs to be viewed and presented in a cultural context, which this use of Tagore’s art did not do, the release adds.

“In our view, the use of the cartoon is prejudicial and sensationalist, and without providing that context of colonial critique, the cartoon seems to present a racist view of Hindus and can be seen as pejorative, and reinforces the kind of narratives that were created about Hinduism to justify colonial conquest and conversion,” remarked Nikunj Trivedi, president of CoHNA. “At a time when Hindus have been the subject of attacks on college campuses and places of worship, endorsements of such bigoted portrayals of Hindus and Hinduism by Harvard and HUP further reinforce racist colonial theories, and are a matter of great concern in the Hindu community.”

“Indeed, such endorsement do lend to the political view that Harvard endorses Hinduphobia, something that CoHNA hopes is not the case.”

CoHNA has demanded that the HUP acknowledge this error of representation, and in good faith, issue an immediate apology to the Hindu community. In addition, CoHNA asks that Harvard sponsor a seminar by Hindu scholars to discuss the problematic nature of such endorsements and the issue of representation about Hinduism to reduce prejudice.

“As an institution which prides itself in its rich intellectual history and on the inclusion of diverse voices, it is important to set the record straight about the absence of prejudice in such communications,” remarked Rajeev Menon, Vice President of CoHNA. “The choice of the Tagore cartoon does not demonstrate that unprejudiced view.”

CoHNA is working with several Hindu organizations to raise awareness of this episode as well as the broader impact of such endorsements and promotions on Hindus on campuses and beyond.

Pure Hearts of Georgia: A support group for families with special needs children