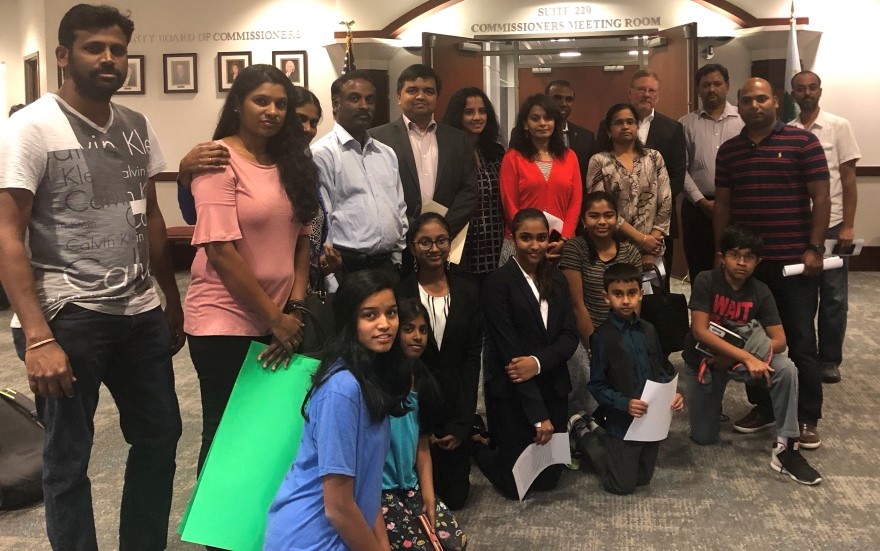 Atlanta, GA, March 10, 2019: On the fateful evening of January 17, 2019, a Chevrolet Silverado traveling northbound on Peachtree Parkway pulling a trailer and backhoe struck a Honda Civic which was turning left into Callaway Court from Peachtree Parkway southbound. The driver of the Honda, Sriram Sundaram, 42 was transported by ambulance to North Fulton Hospital, but did not make it. His wife Sarnya Sekar who was with him at the time of the accident escaped without any life-threatening injuries. Sundaram, father of two girls aged 12 and 7 was an IT executive in the US on a work visa.

Following his tragic death, the community rallied around the family and initiated efforts to prevent such a tragedy from reoccurring at the busy intersection that leads to Cherians, a popular Indian grocery store.

A group of community members including Tommy Cherian of Cherian’s, Dr. Nazeera Dawood, Ponni Chinnamuthu met with Forsyth County and Georgia Department of Transportation (GDOT) officials on January 25 to discuss safety measures at the intersection. The group also started an online petition to address safety concerns at the intersection with Nathan Danapalan, HOA president of Greystone community which is located behind the shopping strip at Callaway Ct , Sai Krishna Natesan, a close friend of Sriram, among others. The petition has over 4000 signatures, both hard copy and online.

As a result of the community efforts, GDOT agreed to do a comprehensive study for the best recommendations.

To keep the momentum going, a group led by Dr. Nazeera Dawood including Sai, Ponni, Vijay, Priya, Sabari, Praveen, Ramya and others spoke at the County Commissioners’ Meeting. The group made a heartfelt appeal to the board of commissioners on February 7, 2019 about their concerns and possible solutions.

Tharini, an emerging driver herself presented her fears of her and her parents driving at the intersection on a regular basis.

“Imagine walking across the stage for high school graduation, walking down the aisle for your wedding or getting your first pay check. Now imagine all that never happening or your loved ones not being able to share in that happiness” said Tharini.

“Sriram was on a work visa which put the family under extreme pressure to wind up and relocate to India in just a few days. We had to sell some stuff, donate most to goodwill, return their leased car, get kids school reports vaccination records before they left,” elaborated Sriram’s friend Sai Krishna Natesan.

12-year-old Shakti and Akshaaya Dhandapani talked about the good times with Sriram’s daughters and said she did not want to lose her parents because of lapse in safety measures. Senthil Ramaswamy highlighted some basic safety concerns including absence of street lights or reflectors along dividers that are hazardous conditions for driving around the area.

Various solutions including installing a traffic light, closing the intersection altogether with provision for a right lane merge are on the table. A traffic light installation, at the cost of $250,000 warrants for minimum of 75 cars in 8-hour period. GDOT, based on their study and inputs from the county will decide upon the best possible safety measures.

“We would like to thank all the Commissioners including Cindy Mills, and Brown for their time, Sheriff Ron Freeman and members of his team going above and beyond to find Sriram’s phone, Deputy Coroner Chris Felton and GDOT for keeping us safe,” said Dr. Dawood.

Commissioner Mills lauded Dr. Dawood and the community for their continued efforts to bring forth positive change in the aftermath of a tragedy.

Currently the Forsyth county officials are in touch with GDOT, following up on the comprehensive study, setting up meetings to discuss proposed changes.

A GoFundMe account set up to help Sriram’s family resettle in India and help with the children’s education raised $372,683 by 8528 donors, surpassing its $300,000 goal. The money will be managed by investing in several low risk investments, according to an update on the GoFundMe page.