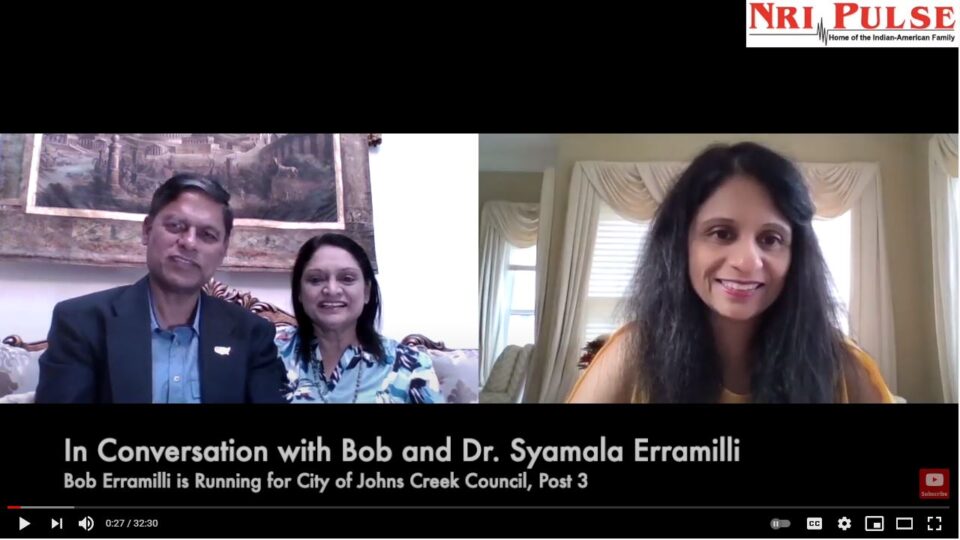 Bob Erramilli, will be competing with two other contestants who have qualified for city council post 3 this year. Current Post 3 Council Member John Bradberry is a Mayoral candidate.

Erramilli has had a unique career path having flown combat jets in the Indian Air Force for 14yrs. He transitioned into Software Engineering for Amex, Martin, IBM, etc. For the past 16 years, he has been operating several Doctors’ offices. Erramilli is married to Dr. Syamala for 33 years and they are residents of Johns Creek since 2017. Their son Nik is an attorney.

In his exclusive with NRI Pulse, Erramilli discussed his decision to run for office, priorities for the city, challenges the city faces and the solutions he proposes.

Erramilli found a home in the United States Air Force auxiliary, the CAP where he serves as a 2nd Lieutenant. He was also thrust into community service via HOA, serving as its President.  As the President of Sai Temple, he worked to raise a flourishing youth volunteer program numbering close to 700. To care for the youth whom Erramilli had noticed can easily stumble into missteps if uncared for, he initiated “I Rose Up” a Youth Mentoring Foundation to nurture high schoolers, providing rich experiences.  In one program, judges would explain the law and consult with them while sentencing offenders.

Why is he running for office? “Below the surface there was a simmering sense of duty.  In my early years, I relished all America had to offer.  Most of us unconsciously transition into nation building via our jobs and businesses. Then some find their calling, extending into public policy.” He elaborated further with an anecdote from his Indian Air force days that “compels him to fix a hole (issue) when he sees one”.

“There are some issues which need to be addressed. Some are priorities, some are not. But some really compel you to take action,” he noted.

“As a Military Aviator, Mission Accomplished happens after a series of quick and prudent decisions. Adapt or perish is a daily mantra.  Fortune 500 companies taught me how to craft solutions, with many moving parts. 16 long years of being a small businessman gave me the expertise to manage expenses, forecasting & monitoring budgets, and cushion over the unexpected,” said Erramilli, elaborating on the ways his experience through the years will help him in office.

What are his short- and long-term priorities for Johns Creek? “Public safety and storm water issues need urgent attention, while the town center and outdoors lifestyle needs a strategic vision,” noted Erramilli.

Inspired by a personal experience, Erramilli is also keen on addressing drug abuse, particularly among the youth. Highlighting safety, Erramiili stressed on the importance of retaining police personnel which some cities are already finding difficult to do, owing to various factors where the personnel feel they are under extra scrutiny. “As public council, you have to strive for a balance between public accountability as well as law and order effectiveness.”

“People who are at the lower levels often face the consequence,” Erramilli observed about issues with stormwater. “I used to be HOA president. Every time I tell my residents that we need to cough up a little more for stormwater measures, it hit their pocketbooks. John’s Creek has already attempted to address this. They’ve taken a first step, but we need to ensure that this is equitable and just to everyone.”

Speaking about the Town Center, Erramilli said the Arts Council in Johns Creek billing at about 55 – 60 million, needs to be monitored. “If we have a budget, we need to monitor it and constantly check if it is staying within the guardrails.”

The Johns Creek area is very green with plenty of sidewalks, he said adding, “we also need to see that those projects are implemented in a timely fashion.

Citing a student who overdosed on methamphetamines in Johns Creek past year, Erramilli expressed his concern about drugs moving up north. “We don’t need a concentrated effort for our kids to go down that path, you just need one bad friend,” he noted. “That is something which is very right front and center in my mind. I want to make sure that respectful law enforcement is implemented, while allowing them to train, allowing them to be more effective in interactions with the civilian community.”

.What do the couple love most about living in Johns Creek? Dr. Syamala who has two offices finds Johns Creek central to both while she enjoys the safety and greenery of the area. “I’m a hopeless romantic. Whenever I cross Gwinnett into Johns Creek, I almost hear the birds chirping, the temperature dropping, becoming cooler. I only have a great mood. Hopefully the music is playing,” mused Erramiili.

What, according to Erramilli is the biggest issue that Johns Creek faces and how would he address it? “Public safety is number one in my mind,” iterated Erramilli, adding that as someone who served in the military, respecting authority comes instinctively to him, and he recognizes that police are the prima facie evidence of authority in the city. The root problem he notes, is that some personnel are not adequately trained to handle a community which is so diverse and some of the cultural differences play up as suspicious behavior by nature, such as casually peeking into an open garage by older visiting parents. While he has been stopped by cops a few times, Erramilli says the interactions have always been courteous. While recognizing that these interactions for others could have been better, Erramilli emphasized the fact that having someone like him on board would ensure better training and play a pivotal role in ensuring public has adequate trust in the force. “Public cooperation is so critical for police to be effective, and vice versa.”

What is the contribution of diversity to the city of Johns’ Creek? “There are four Indian members serving in the Arts Council,” noted Erramilli. The South Asian and rich diverse population of John’s Creek are getting engaged as a community as arts play a great role in integrating communities and immortalizes our society, he added. Students of South Asian origin in Chattahoochee, Johns Creek High school top their schools and when intelligent folks like these get into public policy, they will deliver an exceptional service to this country, he observed. “Diversity is a great strength.”

Identifying traffic patterns that lead to issues, Erramilli pointed to Peachtree corners in Gwinnett and Cumming, in Forsyth, which have stretches of 45 miles per hour. Johns Creek, he noted have the same lanes, wider, but we have a speed limit of 55, so people transit faster to the city. “Recently $2.5 Million dollars was spent to restripe the busiest intersection in the city – Medlock and State Bridge so that the turn lanes are a little faster, and it has shown some improvement there. The lights and stripes are controlled by the city but the roads by GDOT. Ideally, we would like to have wider roads but it comes with its own set of problems. “We could do better with traffic lights, but we are trying to move traffic faster by smoothening the intersections. We are at 90 -92% efficiency.”

What about mask and vaccine mandates? “Vaccines is something I don’t feel comfortable in mandating, primarily because we are all grown up. I rather tell them the benefits, sell them the idea, rather than mandating it. How many people can the police catch if there is a mask mandate? The police will be putting themselves in these trivial situations, rather than addressing crimes. If the city is engaged in the process of informing that will be a lot more cost effective. And also, you don’t waste your equity on whatever the city.”

Why should Johns Creek vote for Erramilli? “Number one thing you learn in the Air Force is to act. You can’t choose your problems. You can’t choose when to act. You must do it appropriately. At the same time, I can’t control the weather. I just adapt. So, all the time these three intangibles are always playing to my psyche. Be prepared for tomorrow’s consequences. When I came to this country, I transitioned into a software engineer. I started working for Fortune 500 companies and when we opened our second clinic and my wife asked me to help, I transitioned, again. We have been living within our budget, we learn to plan, learn to anticipate any unexpected surprises and cater to them. So, these are a couple of intangible qualities which we have gone through for last few couple of decades. So, those are the things which will help me in tackling the problems which are currently besetting Johns Creek.”