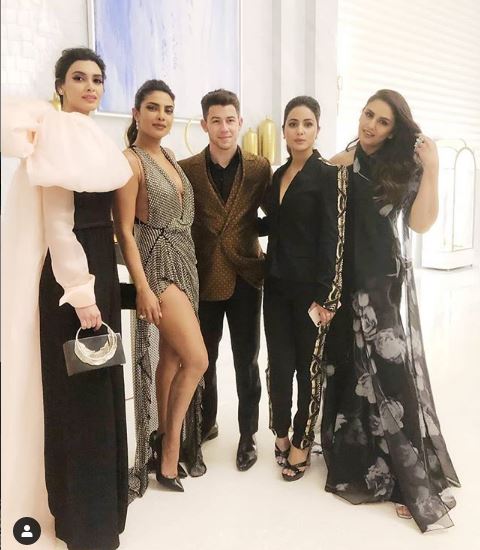 Cannes, May 19 (IANS) Priyanka Chopra Jonas, Huma Qureshi, Diana Penty and Hina Khan made a pretty picture of “desi girl power” as they posed alongside Nick Jonas at a party on the sidelines of the Cannes Film Festival.

Hina, whose presence at the gala has created waves, also shared the same image and wrote: “About Last Night at Chopard’s party. I have a lot to post, lot to write but for now all I can say is dreams do come true.”

All four ladies had their style on point.

Priyanka and Nick were hosts at an exclusive after-party put together on Saturday by luxury Swiss jewellery and watchmaker Chopard and attended by the a slew of supermodels, singers and actors.

The couple has been setting ‘romance’ goals at the French Riviera. They interacted with fans as Priyanka gave off major Grace Kelly vibes in a silk dress and fedora hat, while Nick sported a sharp summer suit.

They also stepped out in all-white outfits, with fans swooning over how Nick held up an umbrella for his wife. “Riviera romance,” Priyanka wrote with one photograph.