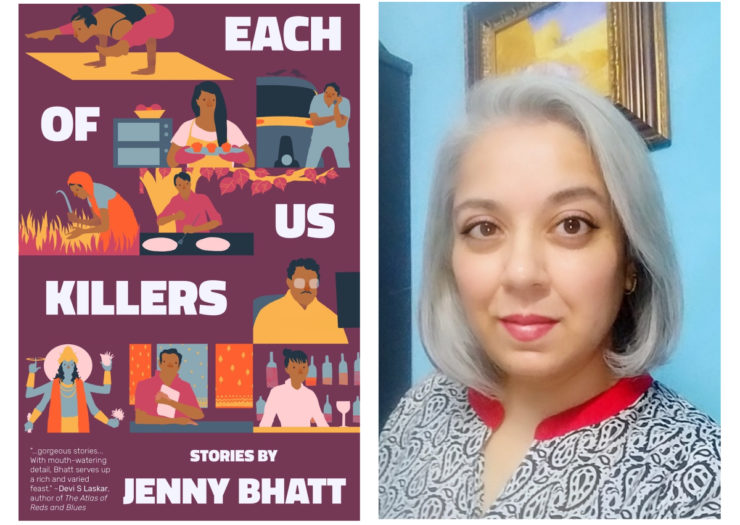 Destiny, as Vidya, a character in ‘Journey to a Stepwell’ notes, for women like her and Ma (her mom), “is simply a dagger thrown at you, which you must catch either by the blade or the handle.” In each of the 15 stories in Jenny Bhatt’s enigmatically titled “Each of Us Killers”, emerges a lingering revelation and characters who battle barriers, desires, and expectations imposed upon them based on race, class, gender, and caste. Bhatt skillfully navigates her narratives as her characters confront their confines, and grapple with the unraveling complexities of life.

Like an astounding Madhubani painting that portrays a wide range of symbols and patterns crafted in vivid colors, Bhatt’s tales, spread across different continents, are part of a lavish canvas that provides a platform for vulnerable and lonesome voices to narrate their tales of trials and tribulations. And not in a gloomy or even violent milieu as one might imagine owing to the unusual title, but rather a fine spectrum of prose and poetry amalgamated in perfect harmony, detailing life’s disappointments and joys in all its natural glory, much like the hues of the Madhubani that radiate brilliance and aesthetics whether they are depicting simple domestic chores or extravagant celebrations. And just like the ancient artform, there are barely any blank spaces on this luxurious canvas and it’s all organic, all the way.

While work and workplace, along with a sense of loss form the leitmotif of the collection, it quickly becomes abundantly clear that Bhatt aims to personalize and present them within a broader social framework as individuals struggle to steer their spaces and voice their concerns. Bhatt’s virtuosity is her nuanced and elegant introspection that never spills over emotions, even while it evokes the deepest ones, raising important questions that are otherwise missed or simply ignored.

In the riveting opener, Return to India, inspired by the murder of Kansas based Indian techie Srinivas Kuchibhotla in 2017, readers learn about the victim of hate crime, Dhanesh (Dan) Patel, mistaken for a Middle Eastern man, through the lens of his co-workers, his ex-wife and his killer’s interviews’ with the authorities. “Probably wasn’t easy for Dan to start taking orders from a woman (his wife), given the part of the world he’s from,’ says a colleague, casual bias on full display.  The victim’s ex-wife, Nirali sums up the isolated immigrant lifestyle perfectly. “We first-generation immigrants try so hard to fit into our new culture while holding onto the old one. We become too foreign for home and too foreign for here, never enough for both.” Charlie Withers,shop supervisor, poses an enduring question, “…did we fail Dan or did Dan fail us?” Dan is not around to speak for himself, but then, as we discover along the way, he never did have the chance to, even when he was alive.

Most women in Bhatt’s universe do come to their own. In the feisty ‘Disappointment’, an ex-girlfriend fumes at the current Indian girlfriend addressing her as a ‘Black bitch’. “How can you take someone seriously if they cannot even get your ethnicity right?” reasons the heroine. True, that!

In the dreamy, lyrical indulgence, ‘Fragments of Future Memories’, we meet a professor and his student in the UK who introspect love and life not necessarily as it happens in reality, but as they believe it did, underlining the simple truth that each person’s perception of love is subjective. “Lovers, they say, look for a complete reflection of themselves in each other. Like Narcissus and his pool, where each was enamored by his reflection in the other’s eyes.”

Bhatt excels in her observations of everyday people and their challenges. Divorcee baker Heena, walks away from an abusive marriage only to find success after her one-night stand in ‘Life Spring’. A domestic help in Gujarat simply accepts sexual harassment as a norm in ‘Neeru’s New World’. The street side food vendor must make the choice of what he is willing to accept in ‘Time and Opportunity’. Pavan, an auto-rickshaw driver named after ‘The God of Wind’, barely eking out a hand-to-mouth existence, must summon divinity like his namesake, when confronted with an alarming discovery.

In ‘Journey to a Stepwell’, an educated and engaged Vidya asks her mother, “Why must our entire lives depend on fathers, husbands, brothers, and sons?”, only to be enlightened through folklore that marriage need not necessarily define a woman’s existence. In ‘Mango Season’, the saree salesman’s humble existence, triggered by the mangoes he passed on his way from work and a sensational customer, houses and recounts the hopes of youth and how, in time, “life eats into them.”

Urmi, a 40 something yoga teaching assistant weighs in ‘Pros and Cons’ of everything, only to embark on a journey of self-realization when she recognizes that not everything needs to be assessed.

In a unique setting of “The Waiting”, Bhatt narrates the story from the point of view of a dead woman whose husband is so overcome by her death that he slowly loses his grip on reality.

‘Separation Notice’ splashes a fine dust of unexpected humor, opening with classic HR tone, addressed to Lord Vishnu!  “Dear Lord Vishnu, this letter is to inform you that your employment has been terminated, effective immediately. … If you have questions about your compensation, benefits, or returning company property, please refer to the policy documents you received and signed …”

I particularly enjoyed the quick and quirky read, ‘Twelve Short Tales of Women at Work’. At barely two to three sentences each, every word delivers meaningfully, the harassment women face at work. “The flight attendant felt the brushing arm each time she went past. As the hours went by, he drank more, stared more, touched more. When she took his dinner order, his fingers slid up the front of her thighs. With the next drink order, she dropped in three sleeping pills.”

Bhatt wraps up with the aptly titled, ‘Each of Us Killers,’ underscoring the issue of farmer-suicide, which holds the entire society responsible on some level.  Set in a tiny village of Saakarpada, the story features a journalist from the city of Mumbai, visiting the village to collect details of farmer’s suicides from his low-caste brothers. While they acknowledge him to belong to their “class”, the village folks are convinced that the now city man would never be able to relate to the injustice and dangers they encounter on a daily basis. So, the village men choose to divulge horrific details of a vicious crime, murder/suicide, only to the reader but guard it from the journalist they perceive as an outsider.

Her characters, mostly Indian, could easily be anyone or anywhere, perhaps in a different cultural setting. But having chosen her own, makes the collection richer for it. Interspersing loss and longing, survival and success in an array of memories, shades, moods, dreams (at places of employment in particular) at the core of her narratives, Bhatt packs in a powerful compilation, rich in prose and poetry that captures the range and depth of characters in an eloquent tone of pragmatic worldviews, postulating a voice for the “Children of a lesser God,” and an awakening of consciousness for Each of us, Killers, who willfully slay or subdue our inner voice that chips away at us.

Author Info:
Jenny Bhatt is a writer, literary translator, and literary critic. She is the host of the Desi Books podcast. Her short story collection, EACH OF US KILLERS, is out with 7.13 Books in 2020. Her literary translation from Gujarati to English, Ratno Dholi: The Best Stories of Dhumketu, is out in 2020 with HarperCollins India. Her writing has appeared in or is forthcoming in various venues like NPR, BBC Culture, The Atlantic, The Washington Post, Longreads, Literary Hub, The Millions, Electric Literature, The Rumpus, Scroll.in, and more. Her fiction has been nominated for multiple Pushcart Prizes and the 2018 Best American Short Stories. She was a finalist in the 2017 Best of the Net Anthology. Having lived and worked her way around India, England, Germany, Scotland, and various parts of the US, she now lives in a suburb of Dallas, Texas. Find her at: https://jennybhattwriter.com.

US proposes giving H1-B to those with top salary offers, scrapping lottery