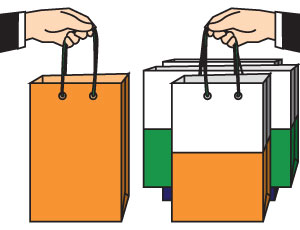 “Such a move would benefit the economies of both India and the United States,” wrote senators Mark R. Warner and John Cornyn, Democratic and Republican co-chairs of the bipartisan Senate India Caucus, in a letter to Obama.

Warner is one of the four lawmakers who will accompany Obama on the trip to India.

“We believe [this FDI] liberalization would benefit the Indian and US economies, as well as helping the nearly 400 million Indians that live below the poverty line with access to cheaper goods and job opportunities,” the duo said.

If the prohibition were lifted, many US businesses would have greater access to India’s $4.9 trillion economy and a growing middle class, Warner and Cornyn suggested.

It also has the potential to increase competition in India by providing less expensive goods and create 250,000 jobs directly with the potential for more than 1 million jobs in customer service, IT, logistics, transportation, and administration by 2021, they said.

The Indian e-commerce market currently sits at about $3.5 billion and is expected to increase to $6 billion in 2016.

With the increase in low-cost smart phones and mobile broadband, penetration is expected to be significant in rural and semi-rural areas, the lawmakers said.

With expanded e-commerce, these consumers gain access to goods and services through retailers that currently lack brick-and-mortar locations, Warner and Cornyn said.