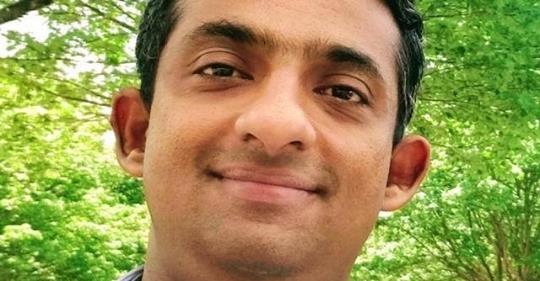 Atlanta, GA: Following the tragic death of a young IT executive in a car wreck near Cherian’s grocery store in Suwanee on January 17, the community has initiated efforts to put up a traffic light at the busy intersection.

Sriram Sundaram, 42, who was in the US on a work visa, and his wife Sarnya Sekar were heading to Cherian’s, when their car was t-boned by a pick-up truck at the Callaway Ct & Peachtree Parkway intersection. Sriram suffered serious injuries to his head. He was rushed to a nearby hospital where he died during surgery that night. His wife sustained minor injuries.

Sriram is survived by his wife and two daughters aged 12 and 7. While the death shocked the community, it has also led to efforts to prevent such a tragedy from reoccurring.

A group of community members met with Forsyth County and Georgia Department of Transportation (GDOT) officials on January 25 to discuss safety measures at the intersection. The group included Tommy Cherian of Cherian’s, Dr. Nazeera Dawood, Ponni Chinnamuthu who started an online petition to address safety concerns at the intersection, Nathan Danapalan, HOA president of Greystone community which is located behind the shopping strip at Callaway Ct , Sai Krishna Natesan, a close friend of Sriram, among others.

Several safety measures including setting up of a traffic light and opening of another exit/ entrance on the other side of the shopping complex were discussed. The GDOT team said it needed two weeks to gather data, during which time, a video camera would be placed at the intersection. The data would then be shared with the safety enhancement coordinator to make recommendations. Several alternative safety measures were discussed. The Sheriff’s office said it would come to the communities to educate drivers on when and when not to use the median etc. The GDOT team said it would work at creating a series of short educational road safety videos.

A second, broader community meeting with county and GDOT officials is scheduled for February 7.

Meanwhile, a GoFundMe account set up to help Sriram’s family resettle in India and help with the children’s education raised $372,683, surpassing its $300,000 goal. The money will be managed by investing in several low risk investments, according to an update on the GoFundMe page.

“The maturity periods for the investments will be timed to match primarily with the kids’ education needs. Smaller portions of the raised money will be used to help the family handle any current and near future expenses and also help Saranya, Sriram’s wife get job related training,” the update added.