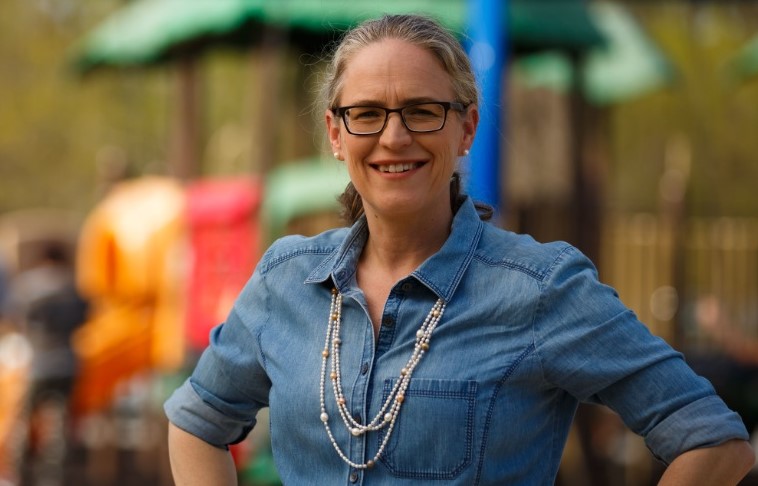 The event was hosted by Subash Razdan, chairman of The Gandhi Foundation of USA; Uma Palam Pulendran, Academic Program Professional at Stanford University; and Subra Viswanathan, vice president of Software Engineering at ACI. The roundtable was moderated by Janani Nathan, art teacher at Whitney M. Young Magnet School, and Aarya Venkat, a biochemistry PhD candidate at the University of Georgia.

“Carolyn’s detailed answers and the depth of her understanding of the issues truly amazed me. She is one of the most highly qualified candidates among all candidates running in this election. A mother, a Yale alumna and a life-long public servant with progressive policies, she is the perfect person to represent GA 7 in the Congress,” said Pulendran.

“When I graduated, my father sat me down and said ‘Carolyn, I don’t want you to ever forget that this country invested in you and gave you a world-class education. And with that comes responsibility to give back to your community.’ That has formed the core of my commitment to public service,” stated Bourdeaux. Her humble beginnings notwithstanding, Bourdeaux went on to graduate from Yale University with a B.A. in history and economics. She received a Master of Public Administration from the University of Southern California and a Ph.D. in public administration from Syracuse University. She is a Professor at the Andrew Young School of Policy Studies.

“Along with being a professor, she is also a good student and a learner who wants to know enough so she can serve her constituents and the country well, if elected,” said Razdan, who spoke to her earlier about the issues pertinent to the Indian American community. Razdan said Bourdeaux eagerly listened to his views and concerns about Indo-US relations with focus on India-China-Pak-Kashmir-Ladakh relations, and Kashmir history issues including human rights of Kashmiri Hindus who were ethnically cleansed from Kashmir during the 5-8 exodus over the centuries with the last one being as recent as 1990. “I also spoke about Indian American issues such as equality, plurality and justice for all races in USA, H1B visa quotas, long waits for green cards, discrimination of our youth for admissions into Ivy schools and Med schools, and the fantastic frontline work done by the MDs of Indian origin during the current pandemic,” said Razdan, adding he also discussed having history text books in US schools without distortions, denigration and ridicule of Hindu Gods/deities along with Indian history and the historical and archeological perspective of Ram Mandir.

“The rise of white nationalist movement that is underpinning President Trump is very dangerous and is very central to why I am running for the seat,” said Bourdeaux addressing issues facing immigrants.

“I believe in an immigration policy that is built on human rights,” stated Bourdeaux, adding that the need is to recognize human dignity and economic reality, and take in refugees who are in legitimate fear of persecution from their own countries, address the DACA recipients and the need for a path to citizenship for people who have been here for a long time.  “We benefit tremendously from the energy, and the knowledge and the brilliance of our immigrant communities,” she said.

Speaking of Affordable care, Bourdeaux noted the need to “fix” the bill, and also provide a robust option that will provide a non-employer-based health insurance and an option for small businesses that are struggling to cover their employees.

“I support the legislation that passed in the congress to ban choke holds, to make sure we have national review board, and prohibit police who are charged with misconduct to apply in another jurisdiction,” said Bourdeaux, adding that she supported police reform.

“One of the big issues we have in this country is that we ask our police as well as our schools to deal with social problems that are really a result of not having a functional social safety net,” noted Bourdeaux, tying the issue to healthcare. She cited an example of a person diagnosed with Bipolar in prison, who ironically was able to get the  treatment he needed only while he was in prison but could not afford it once on the outside. “We ask our teachers to deal with parents who cannot afford to clothe their children, feed their children and we need to deal with these issues on the front end, instead of asking the schools and criminal justice system to deal with it.”

“Before we can get our schools open, before we can get out economy back, first have to get control of the disease,” said Bourdeaux addressing the issues with the pandemic, also stressing upon the need to ramp up testing with quick turnaround in results, contact tracing and a way to quarantine people who come in contact with the infected. “The President, congress and senate have not been able to extend unemployment benefits to people, not been able to support our small business communities appropriately.”

Addressing issues of school funding, Bourdeaux emphasized the importance of getting the package from Central to State. Georgia, she said had one third of the state budget assigned to teacher’s salaries.

“Right now, we are in such a dangerous situation that we do not have many options other than continuing with digital education,” said Bourdeaux about school openings, citing old school structures that only aid the spread of the disease. Speaking about equity in education, she said it was important to take this opportunity to have the best teachers to do lectures, and leverage broadband and emerging technologies to explore new ways to provide education. “In every crisis there is a silver lining. Hopefully this will lead to investment in our teachers, investment in our schools, digital technology to help improve education.”

“Electrify everything,” said Bourdeaux, addressing climate change issues, adding that everything we use needs to be based on electricity and the source needs to be energy from renewable sources. She emphasized the need to have a net zero carbon footprint, rejoin Paris climate accord, and invest in infrastructure.

Addressing the need for interpreters for South Asian and other language communities, Bourdeaux said her campaign was actively working on making her material accessible in all languages but was open to any ideas. She underlined Gwinnett’s victory at the voting booth, where one person is allowed to accompany anyone with language barriers.

Bourdeaux accentuated the importance of getting involved in campaigns including hers. She also appealed for contributions, saying her campaign depended heavily on public support.

“Vote. Fight for your vote. Vote by mail. Vote early. Or Vote on election day,” urged Bourdeaux, stressing that vote by mail can be easily tracked. It is interesting to note that Bourdeaux, the 2018 Democratic nominee for Georgia’s 7th Congressional district, came in within 433 votes of flipping the seat, making it the closest U.S. House race nationwide.

“Immigrant communities – you have got to help make America work. Everybody needs to push on this one.”

At a time when many in-person events are on hold due to COVID-19, Bourdeaux has been holding regular virtual events to connect with Georgians across the 7th Congressional District. In addition to roundtables like Sunday’s South Asia event, Bourdeaux has been holding regular weekly “Carolyn’s Corner” online town halls, live events that allow Georgians to ask Bourdeaux about topics like health care, racial justice, Pride Month, and youth voting. Previous guests on Carolyn’s Corner have included Congressman Hank Johnson (GA-04) and Congressman Hakeem Jeffries (NY-08).