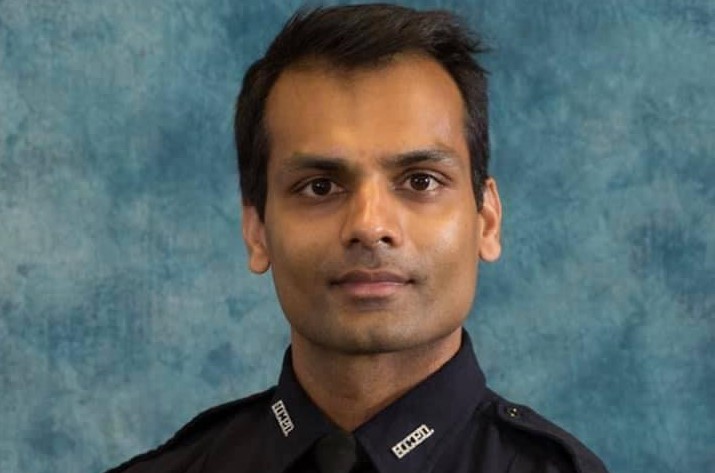 UPDATE: The funeral plans have been released for Officer Paramhans Desai.

A viewing will take place from 9 to 11 a.m. Nov. 14 at the Henry County Performing Arts Center at 37 Lemon Street, McDonough. The service will begin promptly at 11. Citizens wanting to show respect for Officer Desai and his family are encouraged t line the following streets:

Along North Ola Road between Ola High School and Hwy 81

Along Highway 81 between North Ola Road and John Frank Ward

Along John Frank Ward between Hwy 81 and Lemon Street

The police department is asking citizens to be in place by 8:30 a.m.

Atlanta, GA, November 9, 2021: Police officer Paramhans Desai, 38, who was shot when he arrived at a house in McDonough, Georgia on the evening of November 4 as he tried to make an arrest, has died.

“It is with a saddened and heavy heart that the Henry County Law Enforcement Family along with Henry County Government announce the passing of Police Officer Paramhans Desai,” said a statement posted on the police department’s Facebook page. “Officer Desai succumbed to his injuries with his family by his side today at approximately 9:55 p.m.”

“Officer Desai is survived by his wife and two young children. Officer Desai continues to serve, even in his passing, by donating multiple organs which will save numerous lives. Please continue to keep Officer Desai’s family in your thoughts and prayers through this terrible tragedy.”

Desai was critically wounded after he was allegedly shot by 22-year-old Jordan Marquis Jackson as he responded to a domestic dispute. The attacker pulled away and drew a handgun and shot Desai before fleeing in a car.

Later, Jackson reportedly killed himself during a standoff with police in Riverdale. Police say he was hiding out with some friends and took his own life just seconds before being captured.

Legendary basketball player Shaquille O’Neal, who lives in the town, had offered a reward of $5,000 for the arrest and conviction of the man who shot the officer. In addition, law enforcement agencies had offered rewards totaling $25,000.

Fox 5 TV in Atlanta said that he had been in law enforcement for 17 years, working for the Georgia State Department of Corrections and DeKalb County Police before joining last year the Henry County police force, which has jurisdiction over McDonough, about 50 km from Atlanta.

Police said that he is married with two small children.

In the past year, there has been a dramatic increase in violent crimes nationwide with murders recording a 29 per cent jump to reach 27,570, as police show restraint lest they be targeted.

Police did not appear to have returned fire when Desai was shot.