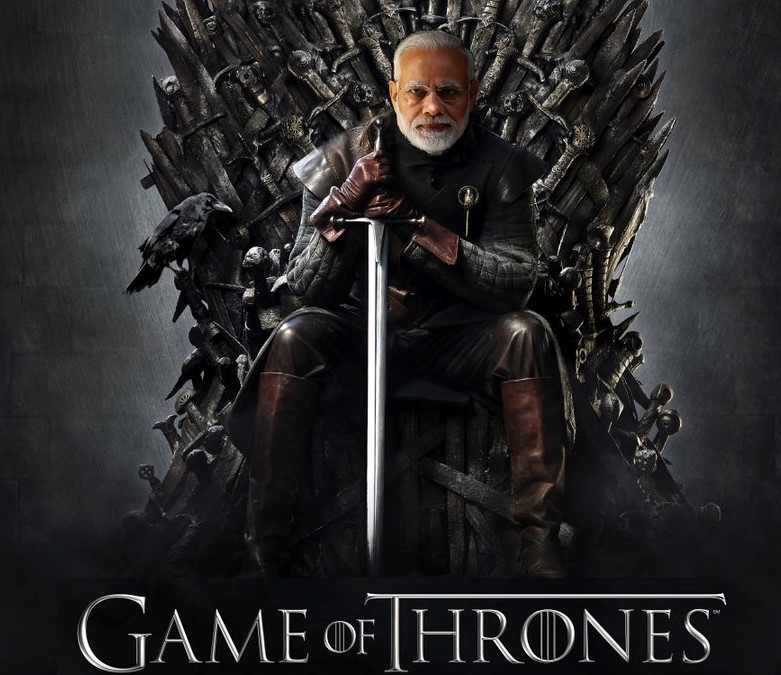 New Delhi, May 23 (IANS) As Prime Minister Narendra Modi readied for a second term, Twitterati used memes and references from the “Game Of Thrones” to hail his win.

“Game Of Thrones” officially ended for Indians today, one Twitter user pointed out as several memes and references of the show emerged on election result day on Thursday.

“Since ‘Game Of Thrones’ season 8 finale was miserable, Modiji made sure fans at least enjoy this election finale,” tweeted another user.

Giving a twist to the titles of Daenerys Targaryen from the fantasy show, one Twitter user hailed Modi as “the first of his name, King of India, Protector of the realm, Breaker of chains and Killer of corruption.”

Another social media user wrote: “All hail His Grace, Narendra of the House Modi, First of his Name, Ruler of Bharatiyas, Lord of the North, South (partly), East, West and North East, Protector of the Realm, Breaker of Chains, Harbinger of Vikas, Scourge of traitors and Baap of all seculars.”

For a lot of “Game Of Thrones” fans, the vote counting day was equivalent to the “real ‘Game of Thrones’ finale.

One netizen was reminded of Cersie Lannister’s famous dialogue: “When you play the game of thrones, you win or you die!”

Lending it a ‘desi’ touch, the user wrote: “Modi: When I play game of thrones, I win or I win!”

“Rahul Gandhi got dismissed as smoothly as the Night King,” wrote another user of the Congress President, referencing how Arya Stark killed the Night King with just a stroke of a dagger.

Summing it all up were several images showcasing Modi sitting on the Iron Throne.

“Game Of Thrones”, which lasted 8 seasons since starting in 2011, ended on May 19, which was also the day the seven-phase elections concluded. The fandom for the show reflected throughout the election season in India as political parties, the Election Commission and the Press Information Bureau used its dialogues and imagery to drive messages to citizens.