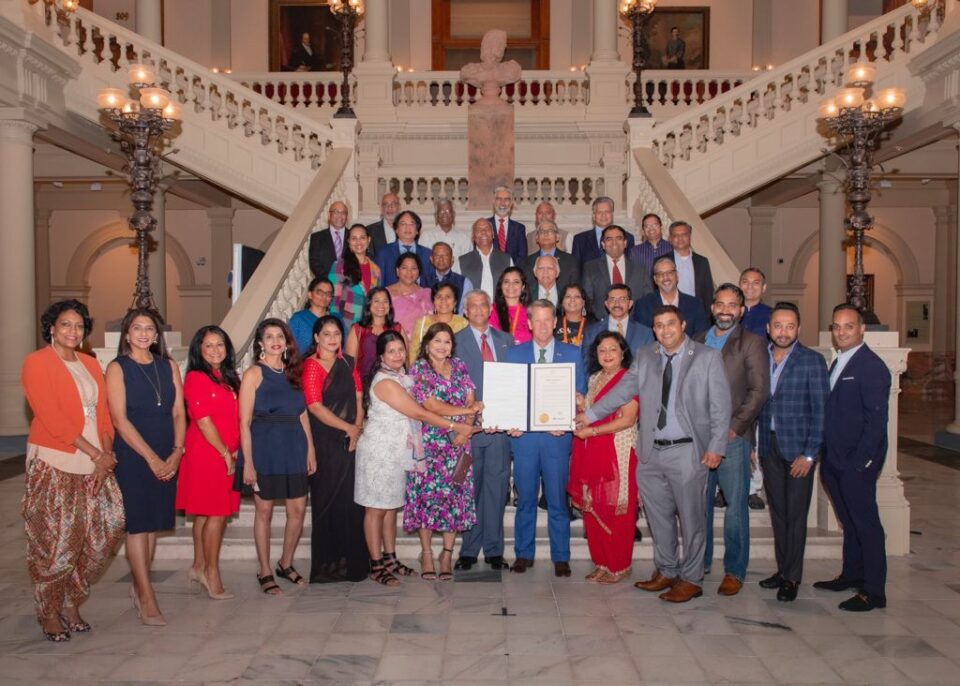 Atlanta, GA, August 11, 2021: As India gears up to its 75th Independence Day on August 15, 2021 Indians in Atlanta had their own reasons to celebrate with even more pride and patriotic fervor. With earnest efforts initiated by India American Cultural Association (IACA), Governor Brian Kemp issued a Proclamation declaring August 15, 2021 as India Day in the state of Georgia. The presentation of the proclamation was held at North stairs of Georgia Capitol Thursday August 5, 2021, in the presence of community leaders and representatives from various organizations of the community.

“We are honored and thankful to Governor Brian Kemp for recognizing the contributions of Indian community in the state of GA with the declaration of August 15th as India Day. This gives me immense pleasure as a member of the community and as President if IACA that initiated this effort on the special occasions of Golden jubilee celebrations of IACA and Silver Jubilee celebrations of FOI,” said Chand Akkineni, President, IACA who initiated the process for proclamation.

The proclamation summarizes the significance of India’s contribution – the concept of non-violence to the world and its Atlanta connection, IACA and its flagship event, Festival of India’s (FOI) role is showcasing India’s rich cultural heritage to Atlantan population, India’s Independence Day celebration across the world, Georgia’s diversity, and contributions of Indian Americans to the state of Georgia.

The proclamation reads” Stepping into its Diamond Anniversary year, ever since August 15, 1947, India’s non-violent struggle for freedom, its rejection of terrorism and extremism, and its belief in democracy, tolerance, and the rule of law have been an inspiration and beacon of hope for people around the world, including Atlanta’s very own Dr. Martin Luther King Jr., who was inspired by Gandhian principles; and

“On August 15, 2021, India American Cultural Association (IACA) will host its 25th Annual flagship event, Festival of India at the Gas South Convention Center inviting people of Georgia to celebrate India’s Independence from the British, showcasing India at its cultural and intellectual best with spectacular performances from the finest dance, music and all performing arts academies across Atlanta and an interesting line up of seminars on diverse themes, both classical and contemporary; and : IACA’s Festival of India represents diverse Indian population from various regions of India, including Georgia’s multifaceted Indian Americans who are entrepreneurs in myriad of fields, health care providers, engineers, technocrats, educators, small business owners, attorneys, judges, writers, authors and artists who continue to contribute greatly to social, economic, and civic health of Georgia; and

India’s Independence Day is one of India’s three national holidays celebrated by 1.3 billion people across the country and two million in the US with flag-hoisting ceremonies, parades and much more; and

The fact that Georgia features in the top ten U.S. Metropolitan areas that houses the Indian American population of 137,000 as of 2019 bears testament to the fact that Georgia fosters and nurtures diversity; and Indian corporations and businesses working with Georgia to open up trade relations between them, aided by local Indian American Georgia residents binds and builds strong relations between the world’s two largest democracies.”

“We are grateful to our Governor for recognizing the many contributions of the Indian American Community in Georgia and honoring India on its 75th Independence Day by declaring August 15, 2021 as India Day in Georgia,” stated Neera Bahl, Director and Appellate Division Judge at Georgia State Board of Workers’ Compensation. Bahl played an instrumental role in the implementation of the proclamation.

Incepted in 1971, IACA is the oldest Indian American organization in Atlanta representing a unified Indian community with diverse and dedicated membership comprising of people from Kashmir to Kanyakumari. IACA has stood the test of time, braving through evolving social, economic and political landscapes in the city and its people, Indian Americans, in particular. The multitude and multi-faceted Indian populace that call Atlanta home today are rooted in organizations such as IACA founded by its earnest pioneers who collectively carved a niche for the community, garnering adulation from people of their adopted country while paving a smoother path for generations to come.

Festival of Indiawas conceptualized by IACA in 1997 to commemorate the 50th anniversary of India’s independence. One of the largest South Asian events in Atlanta, the signature event continues to draw thousands of audiences each year. The festival showcases India at its cultural and intellectual best with spectacular performances from Atlanta’s finest dance, music and all performing arts academies, interesting line up of seminars on diverse themes, competitions, shopping, and quintessential aspect of every Indian home – food. This year FOI will be held at Gas South Convention Center on August 15, 2021, an in-person event with covid safety protocols. IACA extends a warm welcome to all interested attendees to register at foi.eventtitans.com

At a time when the community sensed the need for Indian organizations to safeguard their ethnicity and heritage, back in the 60s and 70s, IACA stepped in and continues to be an effective platform and a catalyst in bringing the community closer. Organizations such as IACA and events like FOI play an essential part in raising awareness, showcasing our culture, and shaping the perspective of the American society.

“This is a historic and proud moment for the community, to be recognized and have representation in the state of Georgia. I am thankful to Governor Kemp for acknowledging India’s contributions to the world and role of IACA in fostering community activities. I am honored to have drafted this proclamation on behalf of IACA,” said Jyothsna Hegde, editor of IACA newsletter, and city news editor of NRI Pulse.

Shershaah – An earnest portrayal of a saga of bravery